Sales of the processed cheese product, which food snobs love to hate, have been in decline for years. Then the pandemic hit, and suddenly stressed-out, homebound people wanted Velveeta for their queso, fudge and extra-cheesy mac and cheese. The sudden interest in the brand presented a rare chance to reintroduce itself to new customers, and to those who hadn’t bought Velveeta in years.
“We recognized that as a great business opportunity,” said Kelsey Rice, senior brand communications manager for Velveeta.

Velveeta wanted to make a big swing, not just to boost sales but to establish itself as part of the culture. “We think Velveeta is an iconic brand, and it should be seen and viewed as such,” she said.

To change its image, Velveeta has had to change the way it talks about itself. 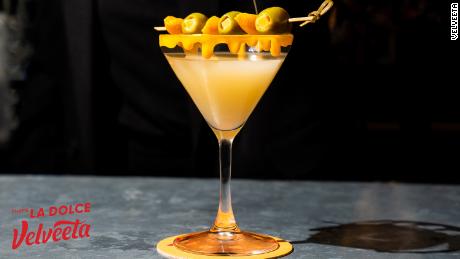 A cheese star is born

Velveeta was born in 1918, according to the Smithsonian magazine. It was the brain child of a Swiss cheese maker named Emil Frey, who developed the product from cheese scraps while working for the Monroe Cheese Company in Monroe, New York. The Velveeta Cheese Company was incorporated in 1923, operating out of Monroe, and was purchased by Kraft (KHC) in 1927, according to the piece.
Asked about the brand’s history, a representative pointed to a 2005 book published by Kraft, called “The Greatest Thing Since Sliced Cheese,” which states that Kraft introduced Velveeta in 1928, a year after funding research at Rutgers University about a processed cheese it was developing.
By the late 1920s, Kraft was calling Velveeta a hit.
“Never in the history of our business have we offered the trade a cheese product that has made such an immediate success as Velveeta,” said a 1929 ad aimed at retailers. “It seems to be a perfect product.” 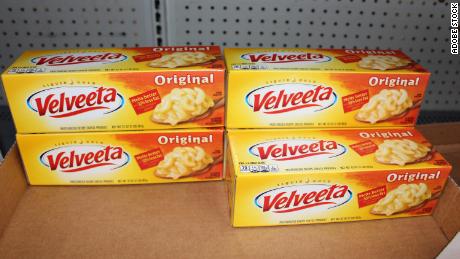 Not only was Velveeta “delicious” and “healthful,” the ad continued, but it spread “like butter” and melted easily when cooked.
The brand’s marketing evolved with the times. An ad from the 1940s pointed to Velveeta as a smart war-time ingredient, offering a recipe for Velveeta Pudding with Spanish Sauce, “a hearty main dish that saves you ration points.”
A 1950s ad suggested to young mothers that “while you’re weight-watching, and also trying to get your needed supply of milk nutrients, make your desserts Velveeta and fresh fruit.”
By the 1970s, Velveeta was a global phenomenon. A 1976 New York Times article called Velveeta a “worldwide favorite,” adding that Kraft’s foreign sales grew 12% from 1974 to 1975, thanks in part to the product.
In the following decades, American consumption of processed cheese continued to increase. In 1996, it hit a peak of 8.75 pounds of consumption per capita, according to the USDA. Then things took a turn.

Not a food, but a product

Two decades ago, consumption started to fall. People worried about the health impacts of highly processed foods, and started eating more natural cheese.
To make matters worse for Velveeta, in 2002 the FDA sent a letter to Kraft warning that it could not use the term “pasteurized processed cheese spread” to describe Velveeta because it is made with milk protein concentrate. So Velveeta went from a cheese spread to a cheese product — today, the company still makes Velveeta with milk protein concentrate and calls it a pasteurized recipe cheese product.
As consumer attitudes changed, Velveeta began to evolve its advertising. Commercials showed Velveeta being used to create an easy side dish, like cheese dip suitable for a party, rather than dinner. 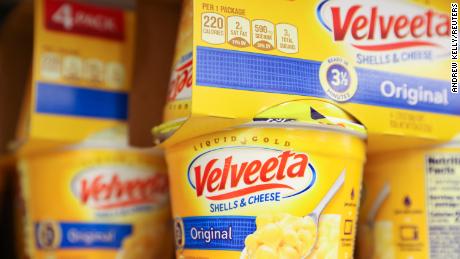 Even as it changed its marketing approach, Velveeta stuck with a few clear messages. The product is easy to deal with. It’s affordable — Walmart’s website shows a 32-ounce package of Velveeta on sale for about $6.50. And most importantly, it can melt.
Years after processed cheese came on the market, it still melts better than natural cheeses such as cheddar noted Chad Galer, vice president of food safety and product research at Dairy Management Inc., a dairy trade association. Processed cheese contain ingredients that allow it to melt into a type of gel when it heats up, he explained. When natural cheese heats up, oil seeps out, giving it that globby texture.
“We’re trying to make natural cheese melt like Velveeta,” Galer said. “But we haven’t unlocked that yet.”
That unique melting quality has been Velveeta’s advertising focus for most of its life, said Rice. Now, it’s trying something new.

In 2018, Velveeta sales fell about 4.5% to $1.1 billion from the year before, according to IRI. In 2019, sales fell again — by about 2.4%.
But, during the pandemic, Velveeta benefited from people’s interest in comfort foods and easy-to-cook meals. In 2020, Velveeta sales surged by nearly 24%.
To take advantage of that movement, the brand developed a new identity. In Rice’s words, “Velveeta exists to make outrageous pleasure a way of life.” The brand updated its logo and launched a new ad campaign, La Dolce Velveeta, to support the change. 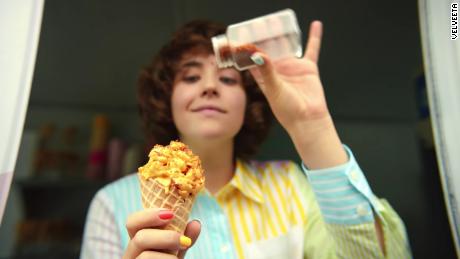 Then came the stunts.
In June, Velveeta started selling a cheese-scented nail polish. More recently it unveiled the Veltini — a Velveeta martini made with cheese-infused vodka and sold at some restaurants, or online.
The nail polish got some good reviews. The Veltini… not so much.
One Washington Post writer who ordered the drink at a restaurant said it looked “like a deranged cheese monster, with olives as beady eyes and a dripping Velveeta cheese rim as a lopsided mouth.” The Today Show’s Hoda Kotb tried it on air, reluctantly, and was not a fan. “Yuck,” she said, “No, girl, no.” Her co-host, Jenna Bush Hager, said it wasn’t bad.
Bad reviews don’t really matter for Velveeta, which is often the butt of the joke.
“Overall, we’re really pleased with the way the world has received the Velveeta Veltini,” said Rice. The most important thing is to get people to think about Velveeta again.
When brands make splashy marketing moves, “people pay attention,” said Bob Samples, executive-in-residence at Western Michigan University, where he teaches students about food and consumer goods marketing. “They go to the store, they remember the name, they buy it.”
So far, Velveeta seems to be holding onto that pandemic boost. After dipping 1.1% in 2021, sales are up 3.2% through July of this year, according to IRI.
The way Samples sees it, Velveeta went from benefiting from pandemic trends to the high inflationary environment. Because Velveeta has a long shelf life, it may be more appealing now, as people try to avoid food waste to save money, he said.

Plus, new ad campaign or not, people know what they’re getting when they buy Velveeta.
“People know what to expect,” Samples said. There’s a “comfort feeling that goes with that.”
Source: Read Full Article