Billionaire CEO Ken Fisher of Fisher Investments has lost roughly $2.7 billion in assets under management after a series of comments he made about women, genitalia, drugs and Jeffrey Epstein at an exclusive executive conference in San Francisco earlier this month.

Three former and current employees and five industry colleagues tell HuffPost that Fisher’s demeanor exemplified the kind of behavior they’d come to expect from the billionaire running the money management firm. Fisher, they say, has a reputation for off-color and misogynistic remarks, as well as repeated comments questioning the abolition of slavery. HuffPost granted two subjects anonymity for fear of reprisal.

After the San Francisco conference, attendees said they were disgusted as the 68-year-old investor spoke freely about his business dealings in sexist terms, comparing winning clients to “going up to a woman in a bar and saying, hey, I want to talk about what’s in your pants.”

Fisher’s comments prompted industry professionals to begin unpacking allegations of sexism and racism made against Fisher over the years. Alex Chalekian, a registered investment advisor who tweeted out a two-minute video about Fisher’s comments at the Tiburon CEO Summit, mentioned at the end of his viral clip that he’d heard from one of Fisher’s past employees “that he had made the comment to them talking about the fact that he thinks that slavery should have never been abolished.”

That allegation appears to have hit a nerve. Former colleagues of Fisher’s told HuffPost they aren’t surprised by the comments and that they’d heard his line about slavery before. Others said it fit in line with the CEO’s way of speaking ― sometimes billed as “eccentric,” “odd” and “colorful” ― code for what many called misogynistic and racist remarks.

Fisher’s views on slavery are relatively out in the open. He even tweeted about it last year, declaring Abraham Lincoln his least favorite president because he believes emancipation was a poor economic choice. Forbes first published the tweets earlier this week.

“[Economist] Douglass C. North proved slavery was profitable at the time of the war,” Fisher tweeted last year. “Wait 30 years and technology would have rendered it profitless and slavery would have fallen peacefully and had it African Americans and everyone today would be hugely better off.” 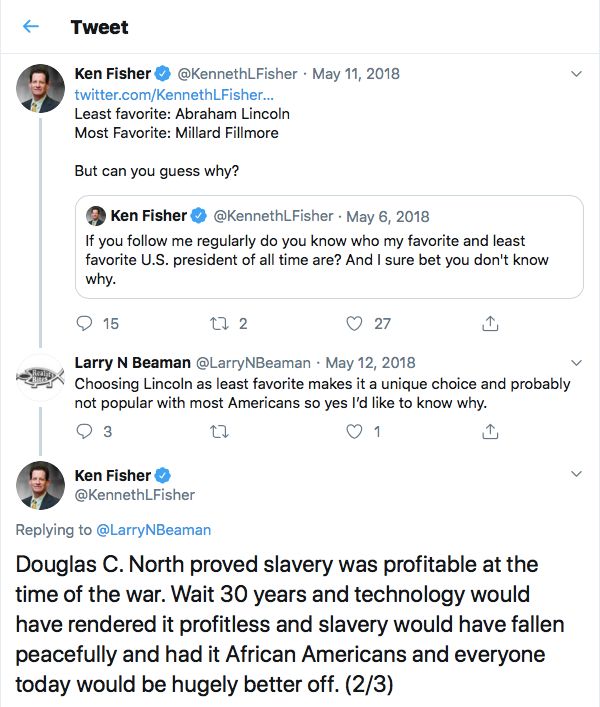 Fisher argued in a statement emailed to HuffPost on Thursday that the tweets were a regurgitation of North’s body of work.

“Read in their entirety, it is clear that these tweets were not racist but an exploration of an historical argument put forward by a Nobel Prize-winning academic,” Fisher told HuffPost via a spokesperson. Fisher didn’t seem to think the tweets took an odd position or were a problem, as his spokesperson sent along a screenshot of all of the tweets to HuffPost “in case you hadn’t had the chance to see all of them.”

Fisher and his team did not comment to HuffPost aside from the statement and the screenshot.

While some people said they were shocked about his tweets, others found them in line with the way Fisher is known to speak. One former Fisher employee told HuffPost that after hearing the billionaire’s comments about slavery in a meeting some years ago, they quit Fisher Investments.

Rachel Robasciotti, founder and CEO of investment management firm Robasciotti & Philipson, attended the Tiburon summit where Fisher spoke and has been one of the few attendees to break the conference’s “no media policy.” She told HuffPost by phone last week that she “was not surprised” when she saw Fisher’s tweets about slavery.

“I was like, ‘Oh ― wow. He put it in print. OK,’” she said, adding that people reached out to her to talk about Fisher’s views on slavery after she first spoke out about the CEO. “It was not the first time I’d heard that kind of thing from people who were talking about their experiences with Ken Fisher.”

Courtney Ranstrom, co-founder of Trailhead Planners, saw Fisher speak at the 2018 EBI West Conference. She told HuffPost last week that she was familiar with Fisher’s sexism but was further disturbed to hear his comments about slavery.

“Fisher being a misogynist was not news to me, but his comments about slavery are a whole new level of awful. Right now, I’m disappointed and demoralized,” she added.

Following the news of Fisher’s comments at the Tiburon summit, Forbes also found a lewd tweet from Fisher that was deleted last week, apparently as the firm went into crisis mode over backlash from his remarks.

Fisher had tweeted a “Quote for the day” on June 17, 2019, that read, “‘The two things that people want more than sex or money are recognition and praise.’ ― Mary Kay Ash.”

Fisher responded: “That is the general theory. But, if you have sex with them they either leave a lot faster or a lot slower; all depends. Risky business. LOL.” 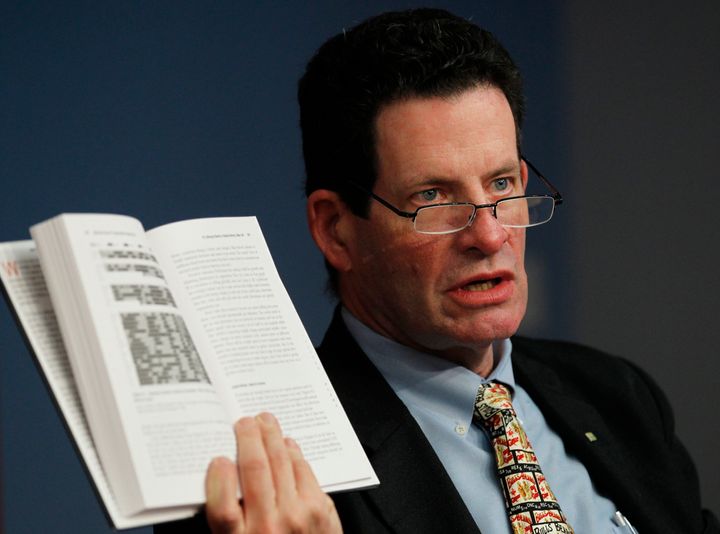 The tweet falls in line with former employees and industry colleagues telling HuffPost they heard Fisher make crude comments about women over the years. They’re also similar to the comments Fisher made at Tiburon, where he “talked about picking up on a girl” and said, “Don’t show ’em what’s in your pants,” during the fireside chat, according to Chalekian.

HuffPost previously reported that Fisher made similar comments at the 2018 EBI West Conference, including saying that what he would do differently in his career would be to “get laid more” and also calling annuity salespeople “rat fuckers.” According to audio obtained by CNBC, he also said during a speech that “once you get older, you know you’re like a Christmas tree, you know you’re, you’re firm once a year and the balls are just for decoration.”

After the conference, Fisher explained away Chalekian’s video in an emailed statement to HuffPost, writing, “While I said words he cited I don’t think he heard me correctly and clearly misconstrued my meaning and certainly my intended meaning. Most of his slant is ‘gotcha’ wrong in my view. To the extent he and any others were offended I apologize truly and sincerely.”

But he told Business Insider earlier this month: “Some of the words and phrases I used during a recent conference to make certain points were clearly wrong and I shouldn’t have made them. I realize this kind of language has no place in our company or industry,” he added. “I sincerely apologize.”

In the wake of the backlash, Ranstrom told HuffPost it’s important to take notice of who isn’t speaking out on Fisher. She said industry professionals have a hard time talking openly about bigotry in the finance business, partly because it’s so rampant and exists at all managerial levels.

“Some of the most well-known people in our industry haven’t commented on Fisher,” she said. “There are people with large platforms who can really effect change but are staying quiet. Our industry needs to have a unified front to end discrimination in financial services. We need people with power and privilege to be allies and to stand up to Fisher and people like him so that we aren’t still dealing with these issues in five years.”

If you have tips on Ken Fisher, please email them to [email protected]

This article has been updated to replace a quote provided to Forbes with a slightly longer quote from Fisher’s spokesperson.