Betting on Florida real estate could be a big mistake

The real-estate scene might seem bright in the Sunshine State, but clouds loom on the horizon.

Thanks to the pandemic, Florida is booming. Executives, startup founders, and companies have flocked to Miami and West Palm Beach in droves from Wall Street and Silicon Valley thanks to Florida’s enticing tax breaks and balmy climate. Record-low mortgage rates and location-flexible remote work helped fuel a home-buying craze, especially among the well-heeled.

A new Redfin report found Miami luxury-home sales skyrocketed 101.1% in the first quarter of 2021 compared with a year earlier, the biggest growth among the most populous US cities. The median sales price of a home is a whopping $2.15 million, up 18.5% from the prior year.

Right now, homebuyers and real-estate investors see opportunity along the Atlantic coast. But climate-change researchers and forecasters warn that the comfortable returns and quality of life these newcomers are banking on are far from guaranteed.

Rising sea levels threaten Florida property values over the next few decades, experts say. About 1 million homes — more than 10% of the state’s residential real estate — will be at risk of flooding by 2100, the Union of Concerned Scientists found. As soon as 2030, thousands of coastal properties worth billions could be pummeled by storm surges and tidal flooding, according to a 2020 McKinsey report. Damages that currently cost homeowners $2 billion annually and are expected to increase to as much as $4.5 billion by 2050, according to the catastrophe-modeling company KatRisk.

Florida homeowners and investors should brace for devalued properties, high insurance premiums, and expensive maintenance costs. In the shadow of such dampers, some people are reevaluating whether they want to own property in certain parts of Florida at all, while others are adjusting their real-estate strategies to account for climate change. Still, others are oblivious to the dangers that lie ahead.

Either way, the calculus is changing for the cost of life in the Sunshine State.

One real-estate investor rethinks where his money is

Shane Neman relocated to Miami from his native New York seven years ago.

Beyond the perk of no state income tax, Neman was drawn to the potential of triple-net properties, whose tenants foot the bill for expenses like property taxes, insurance, and maintenance costs in addition to typical rent and utility payments. The married father of two moved his family to a condo in Sunny Isles Beach, a ritzy city north of Miami Beach that is also located on the barrier island between the Intracoastal Waterway and the Atlantic Ocean.

Since relocating, Neman has acquired assets — mostly commercial spaces like warehouses and shopping centers — across the state while offloading his properties in the Northeast. But he told Insider that his investment strategy is changing as he recognizes that climate change is a real threat to South Florida — and his bottom line. 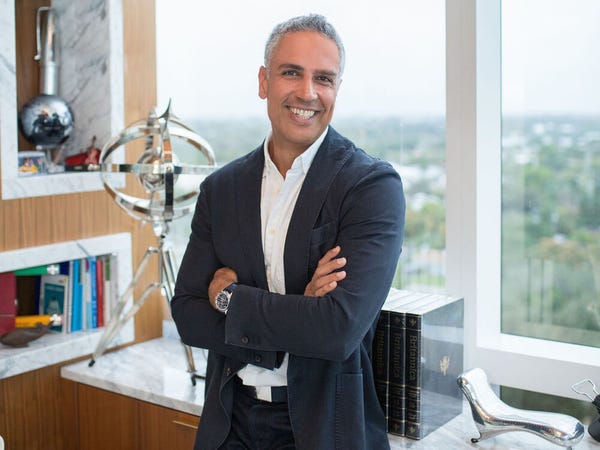 “When I moved here seven years ago, I never really thought about climate change, but now that I live here, I think about it a lot,” he said, adding that homebuyers unfamiliar with local issues often ignore the risks of owning Florida property. “There are times when I’m like, ‘This condo is going to be totally underwater in 30, 40 years.'”

The average homebuyer is shortsighted, looking five years into the future and not 40, he said, but insurers and investors in real estate investment trusts — companies that own income-producing real estate — are starting to think ahead.

‘Almost none of the risk is reflected in prices’

Insurers and lenders have failed to adequately price the exposure of likely events like climate-change-driven flooding into their portfolios, according to a 2020 report by the climate-risk analytics firm Jupiter Intelligence.

“Ignoring, or underestimating, the actual economic risk posed by moderate flooding is common to other geographies in the US and around the world,” Rich Sorkin, cofounder and CEO of Jupiter, said in the report. “Almost none of this risk is reflected in prices. Most of this dynamic is not yet understood, nor is it implemented into the decision-making of financial institutions.”

“While our projections look ahead 30 years, the impact from even moderate flooding in the short-term may cause risk exposure crises next year, or the year after, before lenders and insurers have an opportunity to adjust portfolios or pricing,” he said in the report. 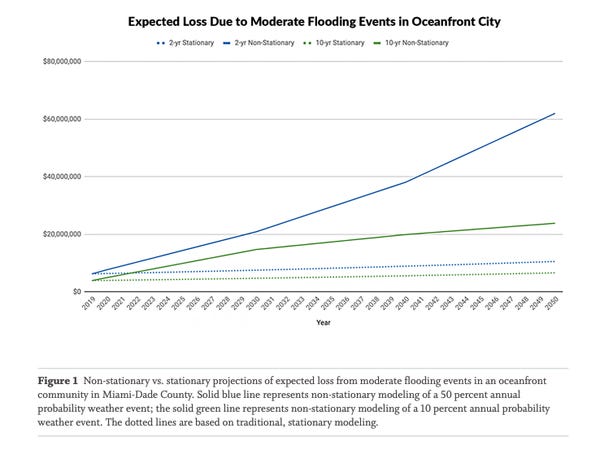 “Homes are insured for their replacement value, not taking into account their entire and total destruction or inability to be rebuilt,” Neman added. “So people think they’re insured for things like that. They’re not.”

He asks himself: “Do I really want to own this asset that might go to terminal zero in 20, 30 years?” 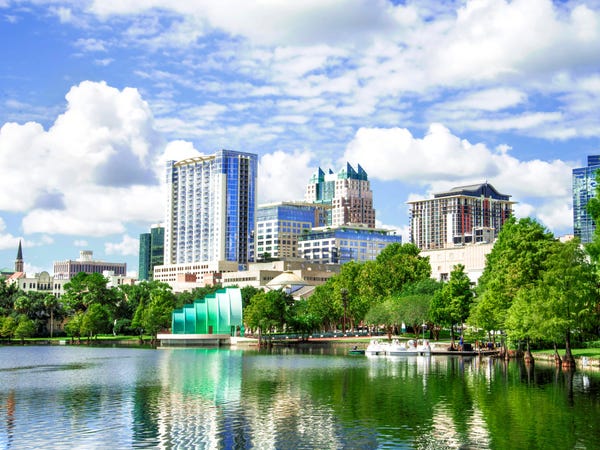 He owns about 12 spaces — mostly commercial units like warehouses and shopping centers — in South Florida, with some in Boca Raton, Miami, and Orlando. But he expects to sell half of them as prices continue to climb, redirecting his focus to parts of Florida like Orlando that are farther from the ocean.

Neman even plans to sell his own condo in Sunny Isles Beach and try to lease it back from the new owner.

Before, he told Insider, he would have lost money if he sold because prices were lower. But with the pandemic driving the market to new heights, he’s seriously considering it.

“I’d rather be a leaser than an owner,” he said, “especially on oceanfront.”

Thanks to its tropical climate and low elevation, Florida is the US state that is most likely to experience climate change’s adverse effects, according to the Union of Concerned Scientists.

The McKinsey report found that heat stress caused by rising temperatures and changes in humidity are among the factors that worsen Florida’s climate woes. Adding to the challenge is that under the state’s surface is a layer of porous limestone, which doesn’t stop flooding as well as other materials.

And because the majority of Florida’s wealth is located along its coasts, the state’s economic future is endangered. Two-thirds of Florida’s 21 million-person population lives near a coastline, which means they are exposed to tidal flooding. 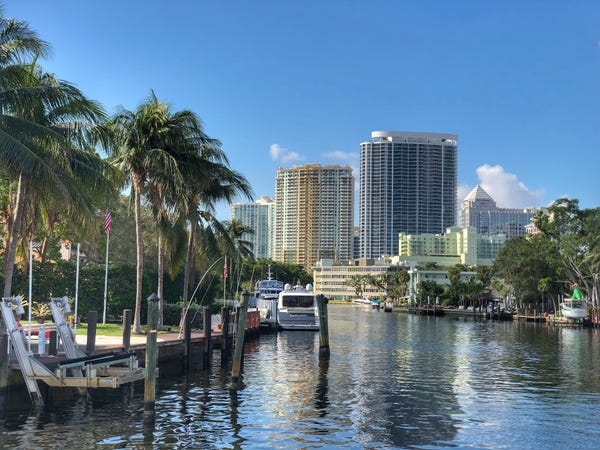 In some areas of South Florida, it’s even possible that permanent flooding will take hold by the end of the century, according to a report by the real-estate consultancy Capright.

Miami is now about 6 feet above sea level. If the current trend lines follow National Oceanic and Atmospheric Administration projections, Miami sea levels could rise as much as 3 feet by 2070, making the region the most economically vulnerable area in the US. By 2100, between 5 and 6 feet of sea-level rise is likely, according to Yale School of the Environment’s online magazine. If that happens, the damage could scatter hundreds of thousands of Miami-Dade County residents and render a significant swath of the city unlivable.

Some Florida waterfront spots are more likely to face climate-caused challenges, McKinsey researchers found. Their report called out Broward, Volusia, and St. Johns counties, all perched on the eastern coast bordering the Atlantic Ocean, as particularly high risk. The counties’ major cities are Fort Lauderdale, Daytona Beach, and St. Augustine, respectively — and all could see average annual real-estate losses increase about 80% by 2050, the report said.

Values in at-risk areas could take a turn over the next 10 to 30 years, research says.

Already, properties exposed to disruptive tidal flooding have been devalued by $5 billion — a $3,000 devaluation on the average home — compared with the prices of unexposed homes, according to McKinsey.

And by 2030, the report continued, 40,000 coastal properties worth about $15 billion could be at risk of disruptive flooding (“disruptive” means it happens more than 50 times a year). By 2050, 100,000 properties valued at a total of $50 billion could experience that frequency of flooding. 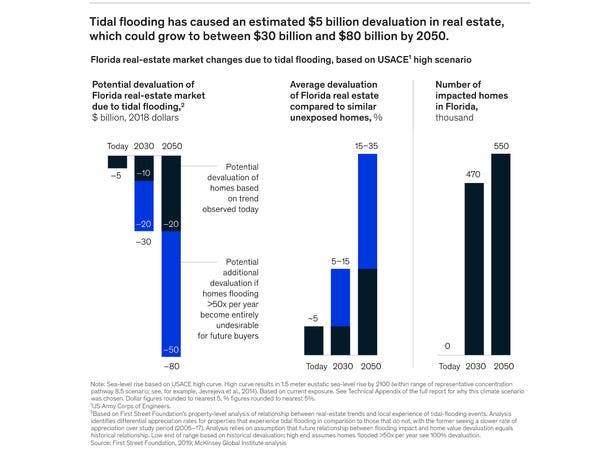 Resale potential will drop as flooding severity and frequency increase over time, too, and home values could even hit zero in some places if prospective buyers disappear, McKinsey said.

Insurance costs are likely to skyrocket

Insurance premiums, too, are expected to increase given the current projections, according to the McKinsey report. 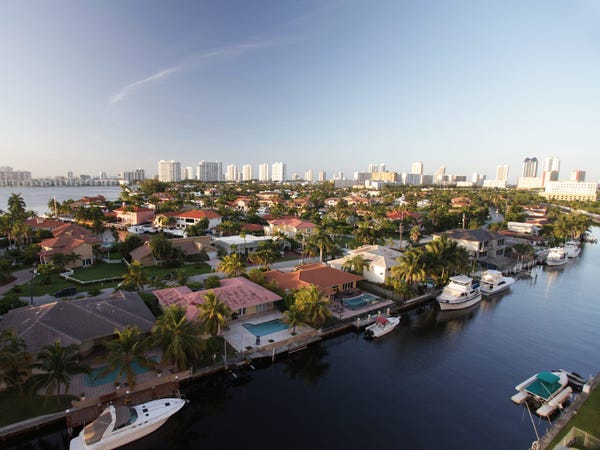 Insurance changes would spark further devaluation of home prices, as buyers would shave dollars off their offers to make up for the higher additional costs.

Indeed, buyers could start to factor in climate expectations before making an offer, according to research published in a Population Research and Policy Review article. Buyers often weigh resale potential and maintenance costs before making a bid, Columbia University’s Steven McAlpine and Jeremy Porter found, so concerns over those factors could drag down the value of entire communities.

It’s not all gloom and doom

Despite the factors stacked against South Florida, some experts advise against sounding the death knell just yet.

“I get this question all the time: ‘Is South Florida doomed?'” Sorkin, of Jupiter Intelligence, told the Tampa Bay Times. “My response is, South Florida is not doomed for a few reasons.”

Around Miami, he explained, the main risks are to certain coastal communities, like Bal Harbour, whose homes are more likely to lose value than ones on higher ground in an inland area like Miami Gardens. Another factor in South Florida’s favor is that many properties are purchased by foreign investors, who would likely still be willing to buy luxury properties in prime waterfront locations even if they were significantly more expensive.

The Miami architect Kobi Karp has erected dozens of structures, like mansions and high-rises, over his three-decade career. Karp, whose clients include the former NBA star Juwan Howard and Starwood Capital Group CEO Barry Sternlicht, has employed a range of construction and design tactics to combat the threats of flooding in his real-estate projects.

Buyers are unlikely to make a clear-eyed, long-term decision to move inland in response to rising coastal tides, Karp said, so builders must respond with more resilient structures.

For one, local architects are building infrastructure 2 to 4 feet higher than before in anticipation of rising sea levels. (Florida properties already get flooded during storms.)

“We need to do it even more,” he said, adding that Florida is “sitting on a sponge.”

In an effort to make new building projects more sustainable, architects are embracing environmentally friendly construction methods that repurpose waste or other recycled parts. In addition to using more repurposed materials and techniques, Karp has pledged to reduce his own carbon footprint to zero.

He’s not alone: Real-estate industry leaders are incentivized to change the way they build and develop properties, he added, because those who acknowledge Florida’s looming climate crisis — and come up with new ways to keep it at bay — can reap the rewards.

“You’ll see a rapid expansion into making solutions because it’s a money-making business,” Karp said, adding that profit is the best motivator. “It affects peoples’ pockets.”