Police in South Florida were hunting for suspects Monday after two people were killed and 21 others were injured in a shooting outside a banquet hall in what authorities called an act of domestic terrorism.

County Commissioner Keon Hardemon said at a press conference the shooting, which came 24 hours after one person was killed and six others wounded in a drive-by shooting in the Wynwood area of Miami, has had a chilling effect on the community.

“We have to be clear about what’s happening in Miami-Dade County.” Hardemon said. “These are acts of domestic terrorism.”

Police director Alfredo “Freddy” Ramirez III was briefly interrupted during the briefing by a tearful father of one of the victims killed during the shooting who was led away by officers.

“That’s the pain that you see,” Ramirez said. “Together, all of us, we must work harder to bring justice to these families.”

Gunfire erupted early Sunday near Hialeah at El Mula Banquet Hall, which had been rented out for a concert, police said. The suspects waited in the parking lot 20 to 40 minutes before three people rolled out of a white Nissan Pathfinder and opened fire on the crowd outside in what Ramirez called a “targeted and cowardly act of gun violence.”

Several people in the crowd armed themselves and returned fire resulting in 23 people shot, two of whom died at the scene, according to police. Three people are in the hospital Monday with critical injuries and three have been released including a 17-year-old who was shot in the leg.

Authorities say the shooting stemmed from an ongoing rivalry between two different groups and the intended target was outside the banquet hall when the shooting took place. Police are still working to comb through video and forensic evidence after being on the scene for almost 24 hours.

No arrests were announced. Police released a video of the vehicle and the suspects to aid the public in identifying them. 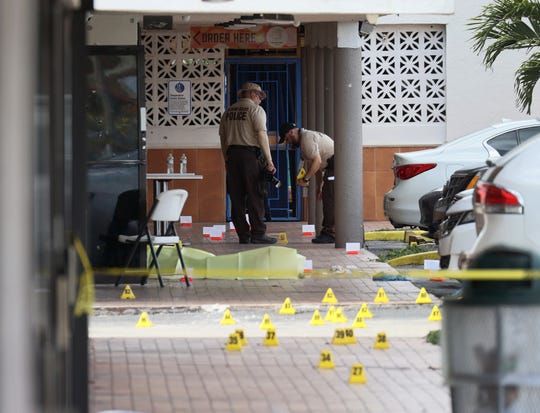 Miami-Dade police investigate near shell case evidence markers on the ground where a mass shooting took place outside of a banquet hall on May 30, 2021 in Hialeah, Florida. Police say that two people died, and an estimated 20 to 25 people are injured after the shooting at the banquet hall rented out for a concert. (Photo: Joe Raedle)

Miami-Dade County Mayor Daniella Levine Cava said at the press conference that local, state and federal authorities, including the FBI, are “working round the clock” to expedite the investigation. Cava said when the suspects are apprehended, prosecutors will use the RICO Act, a federal law designed to combat organized crime, to enhance penalties “when appropriate.”

Cava urged the public to come forward with any information.

“We need your help,” Cava said. “We need you to come forward if you have information to help us solve these crimes.”

Camping World CEO and TV personality Marcus Lemonis said on Twitter that he was offering a $100,000 reward to help authorities “arrest and convict” the suspects.

The Miami division of the Bureau of Alcohol, Tobacco, Firearms and Explosives is offering $25,000 to the reward, Ramirez later said on Twitter, bringing the total reward to $125,000.

Police have not yet released the names of the victims.

Clayton Dillard and his family waited outside the banquet hall Sunday fearing their loved one was among the two fatalities, the Associated Press reported.

“I know he’s there,” Dillard said, “But they won’t let me come claim him.”

Clayton Dillard, right, talks with a police official, left, seeking information about a family member outside of the scene of a shooting at a banquet hall near Hialeah, Florida (Photo: Lynne Sladky, AP Images)

Family and friends also gathered outside Jackson Memorial Hospital on Sunday awaiting news on their loved one’s condition and holding a prayer circle.

Angelica Green told reporters her son and nephew, both 24, were shot when three men in “hoodies and ski masks” opened fire, the Herald reported. Green said her son was “frantic” and in pain when he called her and her husband.

“The worst phone call of my life,” Green said. “He was telling us, if something happens to him, that he loves us. We said, ‘We love you, too, but you’re gonna survive this.’” 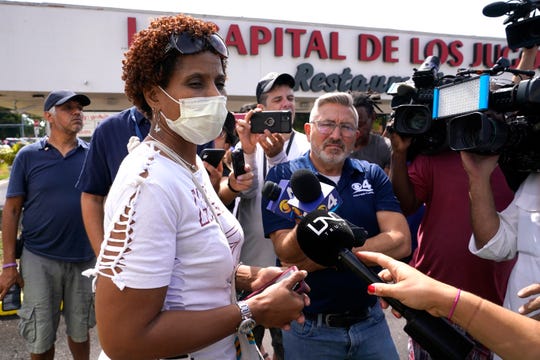 Angelica Green talks with the news media near the scene of a shooting outside a banquet hall near Hialeah, Fla., Sunday, May 30, 2021. Two people died and an estimated 20 to 25 people were injured in a shooting outside a banquet hall in South Florida, police said. The gunfire erupted early Sunday at the El Mula Banquet Hall in northwest Miami-Dade County, near Hialeah, police told news outlets. Green said her son and nephew were injured in the shooting. (Photo: Lynne Sladky)

Chad Harris told WSVN-7 his 19-year-old daughter was in surgery after being shot and he was waiting to hear back from doctors on her condition.