Hold On For Dear Life – Cryptos Are Falling! 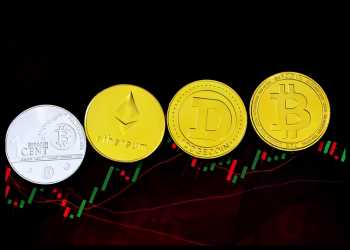 A sea of red has descended on the cryptocurrency market, with the overall market capitalization dropping by a whopping 8.5 percent in the past twenty-four hours. Of the top-100 digital assets by market capitalization, only 2 are in overnight positive territory, and of this, only 1 has gain of more than a percent. Only 16 cryptocurrencies have resisted the bloodbath and are still showing weekly gains.

The massive sell-off in the cryptocurrency market comes amidst the dollar index surging in a day from 95.14 to 95.5, a level last seen in July 2020. However other dollar denominated assets like Crude Oil and Gold have not been adversely impacted by the Dollar’s strength in the past few sessions. Crude Oil (Brent Futures) is trading at $82.81 per barrel, up 0.93 percent from Monday’s close. Gold is currently trading at $1,874.65 per troy ounce, up 0.43 percent from Monday’s close.

The bearishness in cryptocurrencies triggered by the dollar’s strength appears to have been exacerbated by developments elsewhere, especially comments from Chinese officials. Comments attributed to Chinese officials on cryptocurrency mining jeopardizing the country’s efforts to reduce carbon emissions, as well as a warning of an imminent clampdown on commercial mining also apparently dampened sentiment.

Reports citing a company official’s comments that Twitter would have to change its Investment Policy to hold more volatile assets on its balance sheet and that crypto investments did not make sense right now also ostensibly impacted crypto market sentiment.

Shares of companies with cryptocurrency investments or having businesses tied to cryptocurrencies have also suffered in tandem with the drop in crypto prices. Business analytics platform Microstrategy (MSTR) shows a 4 percent drop in share price in pre-market trading.

ProShares Bitcoin Strategy ETF (BITO) closed Monday’s trading at $40.89, down $0.23 or 0.56 percent from previous close. It is currently trading in pre-market at a 5.72 percent loss.

Valkyrie Bitcoin Strategy ETF (BTF) closed Monday’s trading at $25.20, down $0.14 or 0.55 percent from previous close. The ETF is currently trading more than 6 percent lower in pre-market.

Open interest or the total number of contracts in Chicago Mercantile Exchange’s Bitcoin Futures increased to 13795 contracts on Monday, from 13563, a day ago.

The amazing bull run that preceded the flash crash a week ago would have been a mirage without profit booking and crystallization of gains. Plunging into crypto exposure without bracing for the inherent volatility would be not just naivete but also gross negligence.