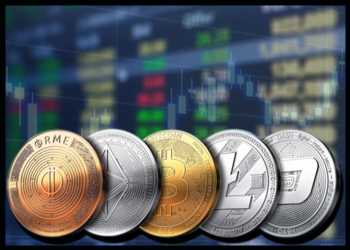 Cryptocurrency markets declined amidst a slightly bearish tone that engulfed market sentiment ahead of the release of the July readings on CPI from the U.S.

While headline inflation is expected to decline to 8.7 percent from 9.1 percent earlier, the Core CPI, the Fed’s preferred inflation gauge is seen rising to 6.1 percent from 5.9 percent in the previous month. Any negative surprise on the readings could further dampen the crypto market sentiment.

Crypto market capitalization declined to $1.09 trillion, versus $1.10 trillion a day earlier, registering a drop of close to one percent.

Asian markets closed deep in the red. European stock markets are trading near the flatline whereas the Wall Street Futures are in positive territory.

Ethereum’s current price of $1,712 is almost 0.5 percent higher than the prices 24 hours ago. Ethereum’s market dominance however remains steady at 19 percent.

Dogecoin declined close to 2 percent and slipped one notch to the 11th position in overall rankings.

86th ranked Nexo (NEXO) is the lead gainer with an overnight rally of 12 percent.

Meanwhile, Reuters has reported that crypto exchange Nuri has filed for insolvency in Germany. The company attributed the action to the sell-off in the cryptocurrency market, the bankruptcy of the Celsius network, and the uncertainty in financial markets.

The Fed’s interest rate hikes and the massive turbulence caused by the events in the Terra ecosystem had caused unprecedented turbulence in crypto market in the quarter ended June, triggering extreme risk aversion and dwindling volumes.