Bitcoin Will Beat The Dollar, Jack Dorsey Declares As BTC Edges Toward $50k

Twitter and Block co-founder Jack Dorsey has predicted that Bitcoin will replace the greenback, displaying his unswerving support for the world’s largest cryptocurrency by market cap.

Dorsey, who left Twitter last month to focus on Block (formerly Square), made this bold declaration while responding to a tweet by Grammy Award-winning rapper Cardi B.

In a December 20 tweet, Cardi B asked her followers whether crypto has a shot at replacing the United States dollar. You see, the dollar has been the main reserve currency since 1944 and investors prefer to park their funds in dollar-denominated assets or basically hold dollars during tumultuous times.

Pundits, however, see markets losing confidence in the dollar in the coming years primarily because the Federal Reserve has pumped trillions of dollars into the financial system in recent years. This has bolstered fears of runaway inflation in the US. Bitcoin is being pitched by its champions as a decentralized and democratic alternative.

The former CEO of Twitter took the chance to reiterate Bitcoin’s supremacy, positing “Yes, Bitcoin will”. Notably, Dorsey has been a staunch evangelist of Bitcoin, which he imagines as the Internet’s native currency, since 2018. He also recently argued that Bitcoin would unite a “deeply divided country” and the world at large.

The Twitter interaction between Dorsey and the “Bodak Yellow” rapper regarding crypto supplanting the dollar triggered different reactions from the crypto community. Dogecoin co-creator Billy Markus shared a meme that suggests the DOGE meme coin is more stable than the dollar.

Others like Bitcoin supporter Dennis Porter indicated he expected such a conversation between a tech billionaire and a pop star since Bitcoin is simply “inevitable”.

But doubters find it hard to foresee Bitcoin becoming a replacement for the American dollar as governments need a centralized currency. This isn’t to say that the bellwether cryptocurrency won’t eventually dethrone the dollar. It could, and should. Bitcoin is a hard and sound currency, and right now government money is just not living up to its billing. 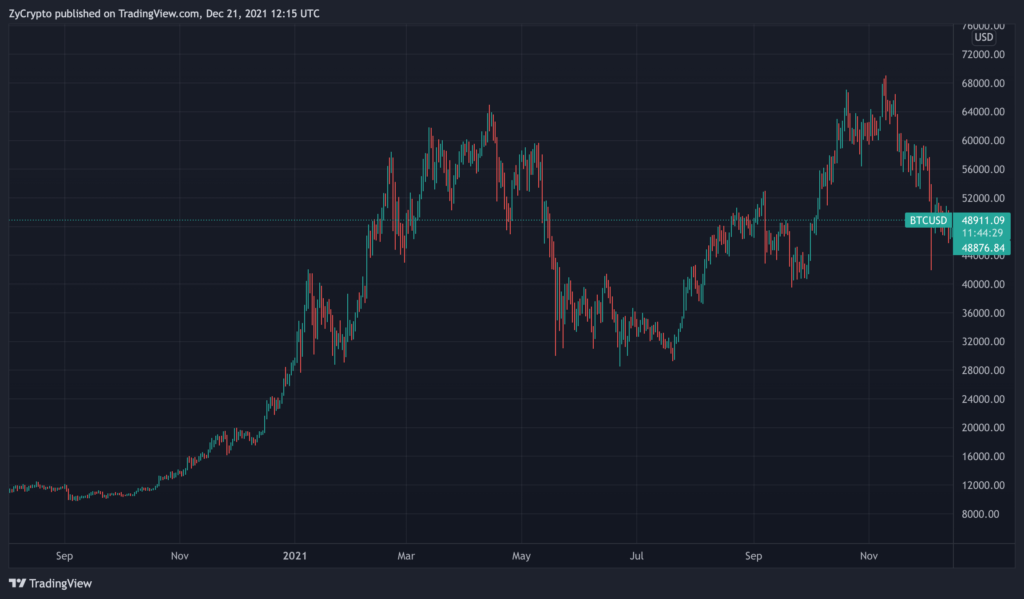 Bitcoin eked out some gains after Dorsey’s tweet, reversing a bearish trend over the past couple of days and edging closer to $50,000. At the time of publication, Bitcoin was changing hands at $48,833.94, representing 6.88% gains on the day.