Bitcoin Successfully Smashes Through $50,000, Here’s What To Expect In The Near Term

Bitcoin bulls have finally succeeded in smashing through the $50,000 price level. For the first time since May, the big bull has managed to break past $49,000.

At press time, daily gains are up over 3%, while weekly gains stay above 5%. Bitcoin is now trading at a price of $50,116, a minor slip from its recent high of $50,419. Bitcoin bulls will need to stay consistent and hold up the pressure at this point or risk breaking below $50,000 once again. 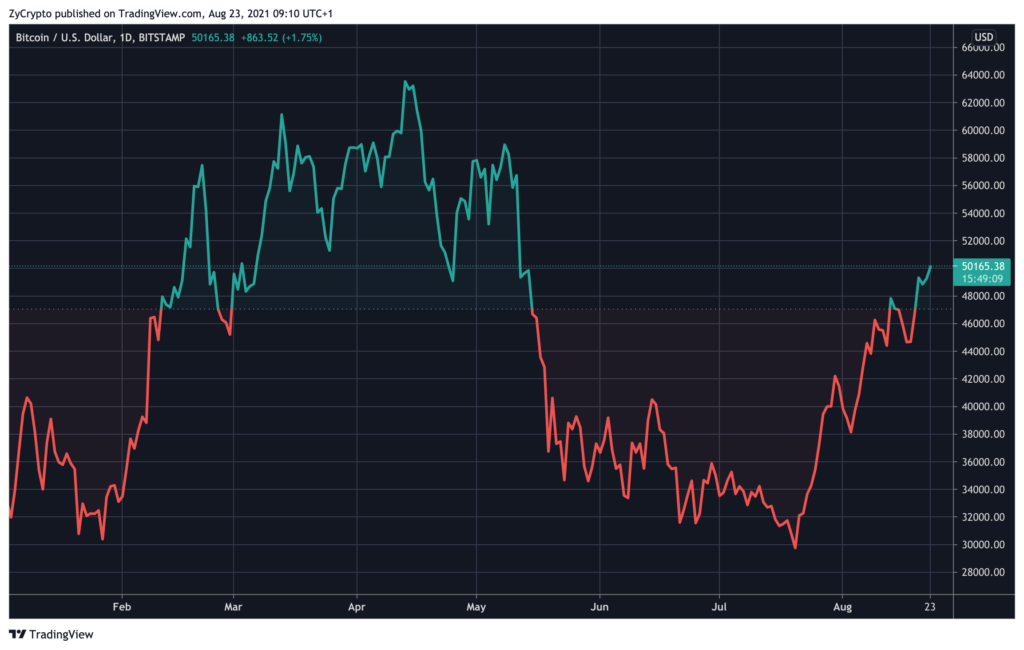 Fundamental indicators hint where Bitcoin is headed in the near term

Prior to the breakout, analyst Rekt Capital asserted that Bitcoin closing above $49,350 was crucial for the asset to “set itself up for a green week.” Bitcoin investor Lark Davis mirrors down the collective investor sentiments in a tweet in which he reckons that Bitcoin bulls could still topple the current price.

“Bitcoin could still grind out a 3X this bull cycle, some big cap alts 10X, mid to low caps 100X. Alts are for making this big gains, Bitcoin is for keeping the gains!”

On-chain metrics also validate the market’s strength. As observed by on-chain expert William Clemente, 83% of Bitcoin supply hasn’t moved in at least 3-months. 70% hasn’t moved in the last 6-months, implying that holders are more bullish than ever.

Meanwhile, CryptoWhale, popular for being opinionated about his skepticism for Bitcoin once again reiterated that Bitcoin is still in a bear market, having previously declared that the rally of $50,000 is a “dead cat bounce.”

“All these puppet influencers calling for $100K targets+ are doing so for engagement, so they can sell you their shady paid groups, affiliate links, and pump and dump scams. We’re in a bear market, and they will never admit that to the herd.”

He did note previously that the market was profitable, saying “I’ve been gradually taking profits on this dead cat bounce in preparation for the trend reversal.”

On the other hand, popular gold proponent Peter Schiff expressed sPeter Schiff Reveals How He Would Have Spent Mesmerizing Bitcoin Returns Had He Invested In BTC Earlier, asserting that the asset has the possibility of hitting $100,000 or $1 million. He conclusively still maintains that Bitcoin is a bubble.