Few things get the crypto world excited like speculation and discussion about the current or future price of bitcoin. Whether it is a price rally that launches a million tweets talking about bitcoin ‘going to the moon’ or a price drop that validates bitcoin naysayers, the community loves to discuss the price of bitcoin.

Experts also weigh in on the price of bitcoin rather frequently, whether prophesying its downfall or claiming that it will reach a certain point. The latest of these comes from Scott Minerd who, in a recent interview, suggested that bitcoin could see a price decline as big as -50% from its current price.

In the interview, Minerd, who works at Guggenheim Partners, stated that he is a fan of bitcoin and long-term, expects the digital asset to succeed. However, its most recent bull run prompts some concern. He feels that the current bull run was too fast and that the market might soon see a wild correction in response. 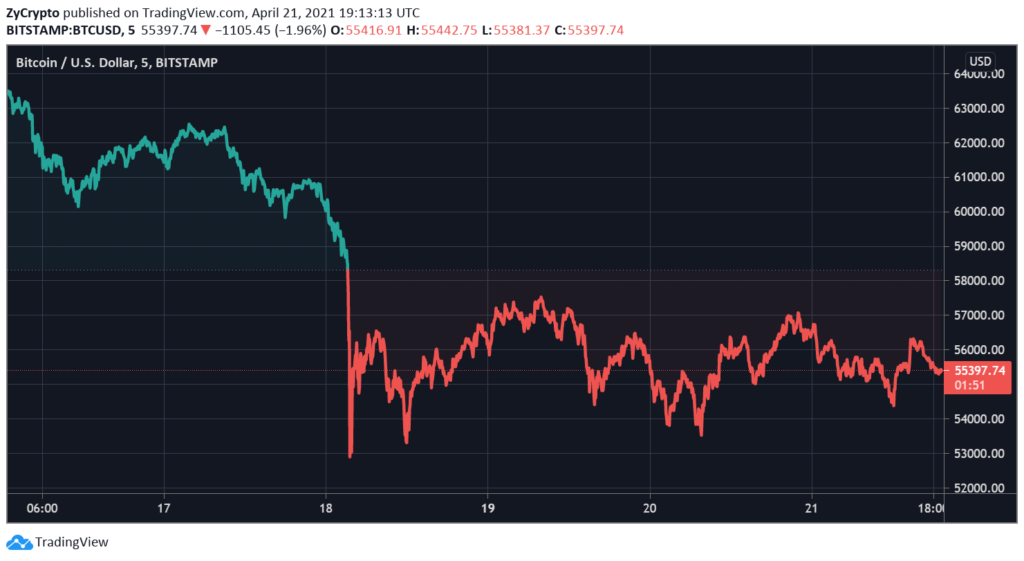 Given that bitcoin now has an all-time high of over $64,863, Minerd expanded on what price point this possible correction would be at.

However, Minerd does not expect these declines to be long-term but instead, he feels that the bitcoin market will naturally come back to around $400,000 to $600,000. Given bitcoin’s history, this is not entirely unusual.

After reaching its previous all-time high of around $20,000 in 2017, the price of bitcoin took a sharp tumble, with many questioning whether the price would ever recover. Now that it has seen a new bull run, it is not out of the question for a major market correction to take place before another significant bullish cycle.

This current phase has persisted for months, with bitcoin rising several times over in value, and given that the market is more mature with more institutional support from firms like Tesla and WeWork, it is no surprise that this bull run has been as long as it has.

It will also be interesting to see if bitcoin does indeed slump and if so, how soon it can make a recovery.