Bitcoin shattering $50,000 will come as no surprise to market players who are now opining that bears had enough time to dominate the market, but have failed continuously. Noting that the bears have run out of time was on-chain analyst Williams Clemente who has his eyes peeled for BTC surmounting $50k in the near term. His tweets echo the sentiments of many Bitcoin proponents at this time.

Bitcoin retests $50,000 once again, but fails to sustain prices

Almost after the rage went up, Bitcoin bulls pushed prices up to $50,000, a 10% surge from Monday. Although at press time Bitcoin has slipped below $50,000 and is now trading at $46,137. With the market’s current momentum, the bullish analytic predictions remain relevant, especially as on-chain data continues to validate the highly anticipated breakout. 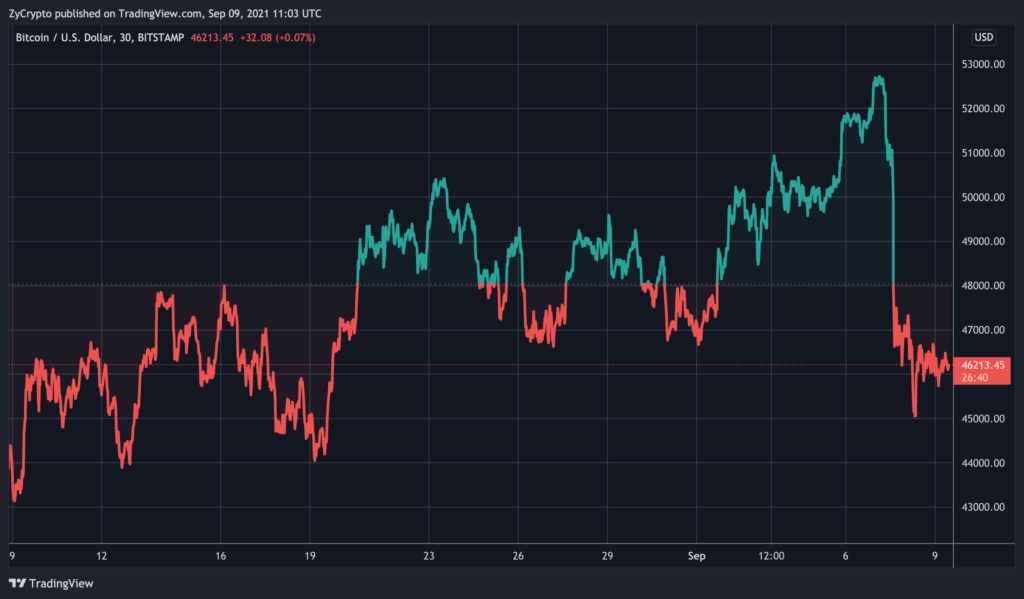 The analyst who observed this in a preceding tweet explained that Bitcoin’s on-chain supply dynamics are currently at levels that were previously priced at $58,000. In the near term, Bitcoin is poised to retest $50,000 once again, according to the on-chain analytics.

How low could Bitcoin go this September?

It is important to remember that the month of September is often dreaded by community members as Bitcoin tends to underperform. This has been the case for the past three years, and analysts are maintaining that this September wouldn’t be any different. However, the floor prices are still expected to be above $40,000.

With critics saying prices could go below $30,000, analyst Rekt Capital is turning to the charts to weigh the possibilities.

Historically, there’s been a pattern of prices previously breaking out, retesting, and rallying to new all-time highs. If this historical pattern is considered, as seen in his most recent analysis, he reckons that it is very likely that Bitcoin will never retest $20,000 as support again. Instead, the kid-cycle correction that followed in 2013 hints that $65,000 may be retested as support for Bitcoin, following the bullish price peak later in the cycle.

However, seeing as Bitcoin is expected to stall at a later time this month, the current bullish run could only be temporary or at least help Bitcoin maintain stability above the $40,000 price levels before it takes off in the following month. October is expected to come with a bullish pressure that ignites the rally towards or above $100,000 by December.