Tether (USDT) is now available on the OMG Network transport layer, the stablecoin issuer announced. OMG Network (OMG), which was initially known as OmiseGo, is a ‘trustless, non-custodial, Layer-2 scaling solution for transferring value on Ethereum.”

OMG Network is said to be:

Tether released a blog post on Wednesday (August 19th) that said USDT holders will be at an advantage due to this integration since they will be able to carry out faster payments at a lower cost than with Etherum but without having to involve in security.

The Incorporation of USDT Has Some Advantages

Paolo Ardoino, CTO at Bitfinex and Tether, said: “At Tether we are committed to driving innovation and improvements to our service to better support our customers. By migrating USDT value transfers to the OMG Network, we save costs, drive performance improvement, and relieve pressure on the root chain network. This is good for Bitfinex and our customers, and the whole Ethereum ecosystem.”

Also, Vansa Chatikavanij, CEO at OMG Network, said with regards to the incorporation: “Today, we’re excited to announce the launch of Tether on the OMG Network that supports thousands of transactions per second at a third of the cost of the same transaction on Ethereum. We’re delighted to address these fundamental issues and drive further growth and adoption of open financial services.”

According to Ardoino, OMG Network will also aid with USDT deposits and withdrawals at Bitfinex, as this will allow traders to ‘react faster’ to trading chances and benefit from the arbitrage more effectively between exchanges as the network expands.

This is how Tether’s blog post detailed on the issue with the current version of Ethereum:

“The Ethereum blockchain is a valuable but limited resource, which, under heavy demand, is vulnerable to severe network congestion. As each block has only a finite space available to users, total transaction throughput is capped at approximately 12 TPS. When transaction demand exceeds 12 TPS, settlement times increase, and gas costs can rise significantly.”

Crypto exchange Bitfinex first announced its intention to integrate Tether (USDT) on the OMG Network, for users to benefit from ‘faster, cheaper transaction’ back on June 1st of this year.

The excitement revolving around yesterday’s release appears to have massively helped the price of OMG to appreciate. As per data from CryptoCompare, OMG was trading as low as $1.666 just a week ago, as the chart below shows: 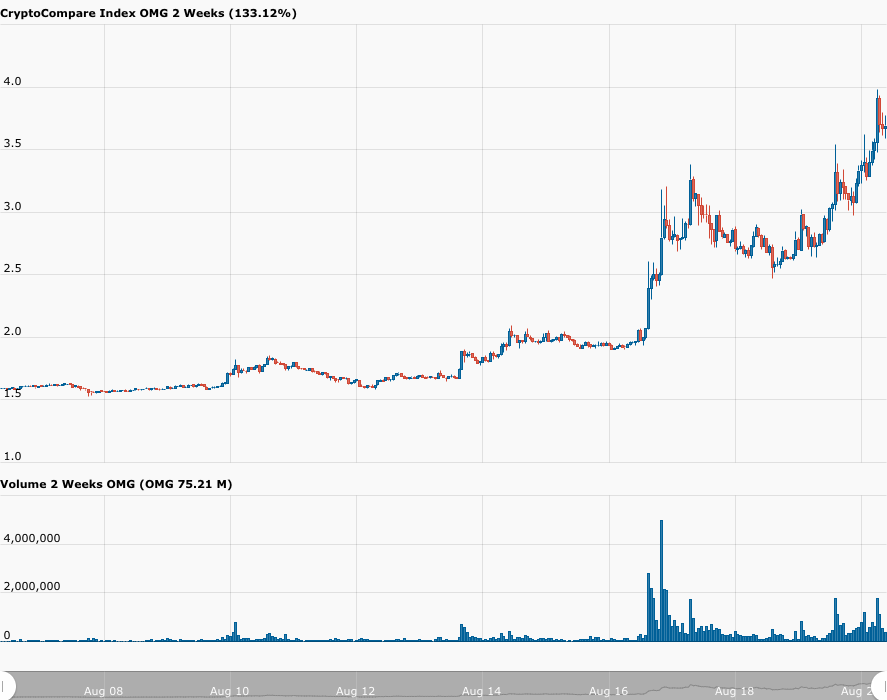 H.R. McMaster: Trump's refusal to commit to peaceful transition is a "gift to our adversaries"
We and our partners use cookies on this site to improve our service, perform analytics, personalize advertising, measure advertising performance, and remember website preferences.Ok