Why are Indonesians dying on the streets of Jakarta a month after their election?

At least six people have died and hundreds have been arrested in violent street protests over the result of the Indonesian election. It is the worst political violence in Indonesia in decades.

To try to minimise the number of people inciting or advertising the protests, Indonesia has slowed down the sharing of videos, photographs and memes across all social media sites.

The winner of the election, incumbent Joko Widodo, is a former furniture salesman and local mayor who grew up in a poor family in central Java. He won an overwhelming, 55 per cent victory against his opponent Prabowo Subianto. 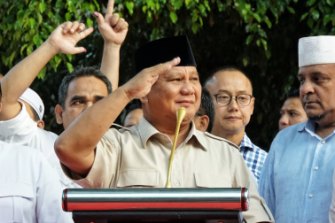 Prabowo Subianto during the election campaign.Credit:AP

What started the unrest in Jakarta?

The election was held on April 17 but, after painstaking counting, the result was announced only this week.

Warned ahead of time about street protests and potential violence, the Elections Commission brought forward the results announcement and held it in the dead of night: midnight on Monday.

Prabowo also lost the 2014 election against Jokowi, after which he likewise challenged the result (unsuccessfully) in the Constitutional Court, citing widespread fraud. Street protests were held then too, though they were muted.

This time, Prabowo had flagged mass rallies and another Constitutional Court challenge well ahead of time if he lost. Once again, he has claimed vote-rigging and fraud, including irregularities on the electoral roll.

The Elections Commission denies this, and there is no hard evidence of fraud. 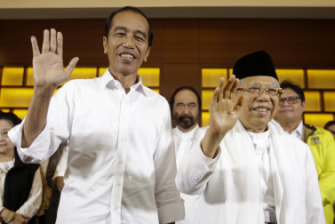 Is Indonesia a functioning democracy?

Twenty-one years after the downfall of the dictator Suharto, Indonesia has grown into a vibrant, fully-fledged democracy – a transition that has largely been successful and peaceful.

About 193 million people were eligible to vote, and, according to the Elections Commission, 153 million did lodge valid votes, even though it's not compulsory.

But the country is still wracked by problems old and new, including endemic corruption, inadequate infrastructure and insufficient environmental protections, a huge gulf between the rich few and the poor multitudes and the economy growing at 5 per cent, which is strong but not quite enough to lift large numbers of people out of poverty. 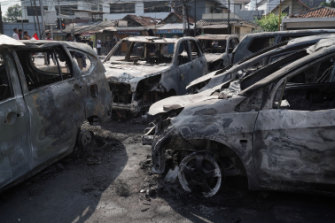 Islam, too, is playing an increasing role in defining political identity and intolerance is on the rise in a nation that has for decades prided itself on its commitment to "unity in diversity".

A large number of Indonesians swore allegiance to Islamic State, and some travelled to Iraq and Syria to fight, returning radicalised and unbowed.

Both presidential candidates appealed to Islamic sentiments but those with harder-line fundamentalist sympathies tended to support Prabowo. 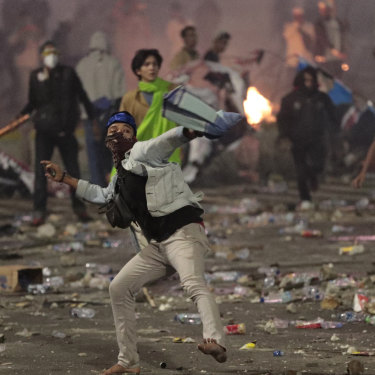 Protesters threw rocks at police and army on the streets of Jakarta.Credit:AP

Why did these protests turn violent?

In the lead-up to the election, Prabowo's supporters had vowed a "people power" movement to protest against the result, and tens of thousands of police had been called in from Friday to guard the street outside key institutions, including the Elections Commission.

Police say that when the protests began in the early evening on Tuesday they were peaceful.

But after 9pm, the peaceful protesters were replaced by people intent on violence who started burning infrastructure including a police dormitory, destroying cars and throwing stones, molotov cocktails and fireworks.

Police have suggested, without naming parties or offering evidence, that the protests were not spontaneous but were organised and paid for by an unnamed political party. They say they found an ambulance with the logo of a political party on it and, inside, envelopes full of money as well as rocks ready to be thrown. They claim that people who were arrested were found carrying envelopes of cash equivalent to several days' average pay in Indonesia.

It is likely that one of a number of radical street gangs, including groups such as the thuggish Islamic Defenders Front (FPI), have helped organise the protesters. Some of the protesters were heard shouting "Allahu Akhbar" ("God is Great)" as they threw objects. It’s Ramadan, a holy month in the Islamic calendar, which is typically a time of renewed militancy among extremists and many of those on the streets.

But protesters have claimed that it was the police themselves who provoked violence in the crowd by planting people who threw stones and firecrackers.

The Indonesian state called out the army on Wednesday to help quell the situation. 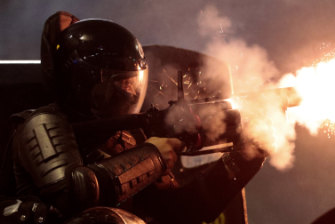 How did people die?

It's too early to tell. There are few details yet about the six people who have been killed but indications are they were protesters, not police or military officers.

The police have not explained the deaths. They have insisted that police were only firing rubber bullets and tear gas.

They have hinted that the people might have been killed by armed protesters themselves to try to provoke a more furious reaction on the streets. They say some of the protesters coming into Jakarta had been carrying guns. 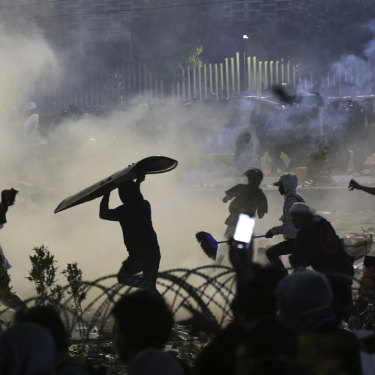 Predictions are difficult to make in this context.

Indonesian authorities advised there remains an increased risk of violence, including possible acts of terrorism. Demonstrations may continue throughout May 23, particularly around the upmarket Jakarta suburb of Menteng, and the Election Supervisory Board, and the areas Tanah Abang, Jalan Wahid Hasyim and Slipi.

Prabowo has a limited time to launch a legal challenge and he's considered likely to do so. The country's Constitutional Court will hear and consider his case, and any further protests are likely to be timed to coincide with that decision. That is what happened in 2014, though the protests on that occasion were confined to one day.

Prabowo is likely to lose that court challenge, as he did in 2014, which should mean Joko is able to govern as president for his five-year term.

Some of his supporters, including one businessman who called for street protests, have been arrested on treason charges. Prabowo's name appeared on documents relating to that arrest but police later withdrew those documents.

It is possible, though not likely, that Prabowo himself may be arrested if police can establish a direct link between him and these riots.

Whether Prabowo contests the election again in 2024 is another question.

What is advice to travellers?

The Smart Traveller website warns Australians to avoid all the areas where protests are occurring or likely to occur.

A number of public institutions as well as public transport, cultural sites and some schools remain closed. Australian tourists should avoid protests, demonstrations and rallies, and monitor local media for updates.

Australia's advice level for travellers in Indonesia, including Bali, is "exercise a high degree of caution". 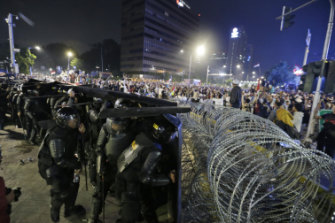