Geneva: UN investigators have implicated Venezuelan President Nicolas Maduro and other high-ranking officials in systematic human rights abuses amounting to crimes against humanity — including killings, torture and sexual violence — and called for criminal investigations to determine the extent of their involvement.

A three-member panel appointed by the UN Human Rights Council said it "had reasonable grounds to believe" that Maduro, his interior ministers and defence ministers, and the directors of the country's security and intelligence services "ordered or contributed to" the arbitrary detention, enforced disappearances and torture of critics and extrajudicial killings. The panel said they also failed to prevent abuses although they had the powers to do so. 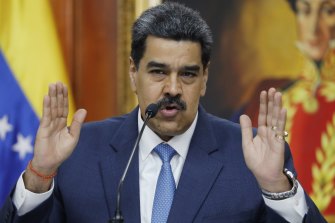 The 411-page report listed about 3000 cases and focused on events since 2014, when opposition to Maduro's government gathered force and authorities resorted to increasingly brutal tactics to stay in power.

Government critics and their relatives and friends were targeted to silence opposition to Maduro, the panel said. Security services also arbitrarily killed people as part of a crackdown on crime aimed at winning popularity before National Assembly elections.

"Far from being isolated acts, these crimes were coordinated and committed pursuant to state policies, with the knowledge or direct support of commanding officers and senior government officials," said Marta Valinas, a Portuguese jurist who chaired the panel. 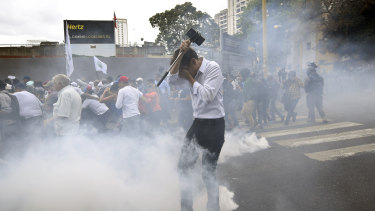 Protesters in Caracas were constantly hit with tear gas and violence while some political opponents reported torture.Credit:AP

The investigators said the information they received showed that Maduro and the various ministers of the interior and defence over the period examined were aware of the crimes and "gave orders, coordinated activities, and supplied resources in furtherance of the plans and policies set out in the report."

The extent of their involvement in these crimes "must be investigated and a determination of their individual criminal responsibility — either in a national or international jurisdiction — must be made by the competent judicial authorities," the panel said.

There was no official comment from the Venezuelan government, but the foreign minister, Jorge Arreaza, posted on Twitter that it was "a report plagued by falsehoods, written remotely, without any methodological rigour by a ghost mission biased against Venezuela, and controlled by governments subordinated to Washington".

The report, which will be presented to the Human Rights Council in Geneva next week, delivers a devastating critique of Maduro's embattled government at a point when it has made conciliatory gestures seemingly aimed at improving its image and legitimacy at home and abroad and easing the pressure of U.S. sanctions on Venezuela's crippled economy. 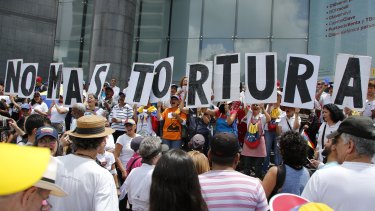 People hold placards that spell out in Spanish: “No more torture” during an opposition protest against President Nicolas Maduro in Caracas last year.Credit:AP

The government in August released 50 political opponents and said it would end prosecutions of dozens of opposition politicians and political activists in an attempt to avert an opposition boycott of congressional elections planned for December. Among those released from prison was Juan Requesens, accused by the government of involvement in a failed 2018 assassination plot against Maduro. He was moved to house arrest.

It also stepped up cooperation with the UN office for human rights over the past year, allowing officials to visit a number of prisons and interview detainees and promising to investigate allegations of extrajudicial killings and the deaths of anti-government protesters.

Michelle Bachelet, the United Nations' high commissioner for human rights, said in a statement on Monday that her staff last week visited the main detention centres of the Bolivarian National Intelligence Service and the Directorate General of Military Counter-Intelligence.

The visits represented a "remarkable leap forward" that would lead to improvements for detainees, she said.

Bitcoin price risks even bigger pullback in Q4 after sharp rejections
We and our partners use cookies on this site to improve our service, perform analytics, personalize advertising, measure advertising performance, and remember website preferences.Ok