Turmeric tablets give these dogs and owners a new lease of life.

‘My dog has a spring back in her step’: How turmeric tablets have given these dogs and owners a new lease of life

Our dogs are faithful companions and walking them is a simple pleasure millions of us enjoy. But to ensure we make the most of this daily exercise, it’s essential that dogs and their owners alike are able to walk comfortably.

As dogs age, they experience similar issues to their owners. Fortunately, as turmeric supplements have become increasingly popular, people have discovered they could be just the trick for their much-loved canine friends too.

FutureYou Cambridge, a science-backed nutritional supplement company, receives consistently high praise for the effectiveness of their Turmeric+ supplement (for humans) which also includes vitamin C*. Interestingly, It was their customers who convinced them to develop a turmeric formulation specifically for man’s best friend. 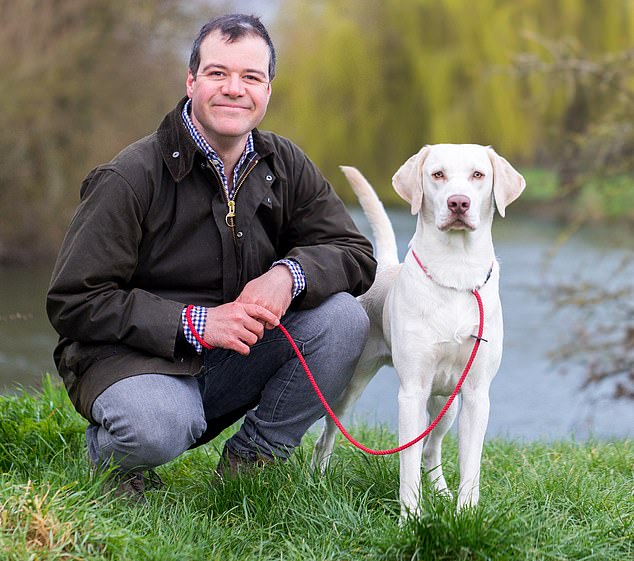 Adam Cleevely, FutureYou Cambridge’s CEO and Labrador owner, decided to develop a product specifically for dogs after discovering customers were giving Turmeric+ to their pets

‘Many customers were telling us they were giving Turmeric+ to their pets after experiencing the benefits for themselves. Most of them were sharing it with their dogs,’ says Adam Cleevely, FutureYou Cambridge’s CEO and Labrador owner.

In response to their feedback, CurcuPet-K9 was born. This highly absorbable turmeric formulation for dogs contains Curcuma Phospholipid Complex, a patented combination of curcumin – the active ingredient in turmeric – and soy lecithin, a fat from soya beans. It’s a very similar formulation to Turmeric+, which is 30 times more absorbable than standard turmeric.

Diane Pool from North Yorkshire decided to give her thirteen-year-old Golden Retriever, Pippa, CurcuPet-K9 when she began to slow down and was no longer keen to go out for a walk. 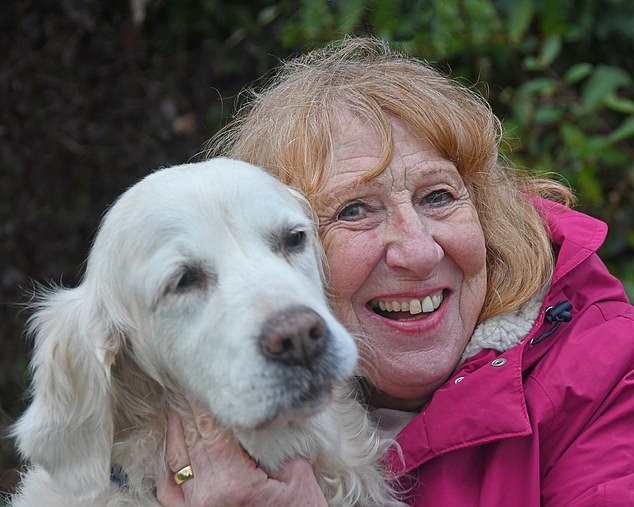 Diane Pool with her 13 year-old Golden Retriever, Pippa who starting seeing the benefits of taking CurcuPet-K9 within a few weeks

Diane says: ‘It saddened me to see Pippa stay in her basket when she saw me getting ready to go out for a walk. It wasn’t like her at all. I read about CurcuPet-K9 and felt I had nothing to lose so decided to give them to Pippa in her food. After just a few weeks, I feel like I have my old dog again, she has a spring back in her step – it’s wonderful.

‘It really made me smile that after I had started Pippa on the turmeric tablets we were out together and a young couple asked me how old my puppy was. Not bad for a thirteen-year old. I now tell all my dog-walking friends about CurcuPet-K9.’

But the story doesn’t stop there.

‘I was so impressed with the canine turmeric I decided to take the human form – Turmeric+.

‘Pippa did me a great favour. We both now enjoy our walks more than ever. I like to sew and I’m able to get out of my chair more easily when I’ve been sitting for a long time – I’m so happy we’ve both discovered these science-backed supplements. I can’t recommend them highly enough.’ 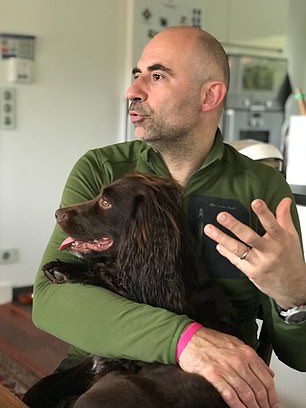 ‘I cannot overemphasise the importance of keeping fit and active to prevent so many health issues. Many of the health challenges in humans can also affect our pets. Being active is also good for the psychological wellbeing of our pets.’

Solo, a Working Cocker Spaniel, was introduced to CurcuPet-K9 as his owner, Éric Chavot, 54, a London-based French chef was taking Turmeric+. Éric had heard about the attributes of turmeric from a chef friend who recommended he take the spice. Eric struggled to incorporate enough into his diet, so he looked online for a supplement and the science behind Turmeric+ attracted him to the company. When their Cocker Spaniel began to show signs of discomfort after walking on hard terrain, Éric and his wife Christine were delighted to discover that a canine version was available, CurcuPet-K9.

‘Solo, our Working Cocker Spaniel, is nearly five now, several years ago he broke toes in both hind paws when he jumped over a balustrade to greet us and fell onto a stone path. At the time we didn’t know about the breaks as he jumped up, shook himself and ran around the lawn and seemed absolutely fine. 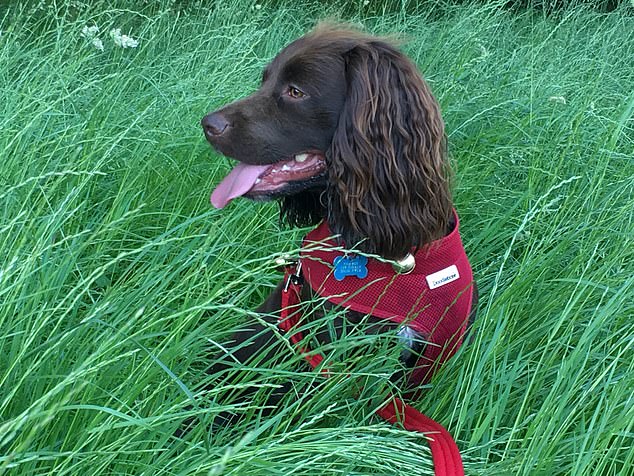 ‘It wasn’t until around a year later that we knew something was up. Solo seemed increasingly uncomfortable after walks on stony ground and rough terrain. Uncharacteristically during walks he started to sit down refusing to move and I would have to carry him back to the car. Spaniels are typically very active especially when they are so young, so of course we became very concerned when he was no longer bounding around like he used to. We discovered through X-rays he had fragmented bones in both paws.

‘I had read the reviews about CurcuPet-K9 and Éric was on Turmeric+ so we thought we would try Solo on the canine version.

‘We’re so glad we did. He’s now been on the turmeric tablets for two years and it’s made a huge difference to his enjoyment of being outdoors. He’s so much happier on his walks. He’s back to being eager to get out, no longer refuses to move and has stopped chewing his hind paws for hours after a walk.

‘He’s doing so well that when Han, our young Spanish rescue Setter-cross recently developed issues with his left elbow and shoulder, we decided to start him on CurcuPet-K9 too.’ 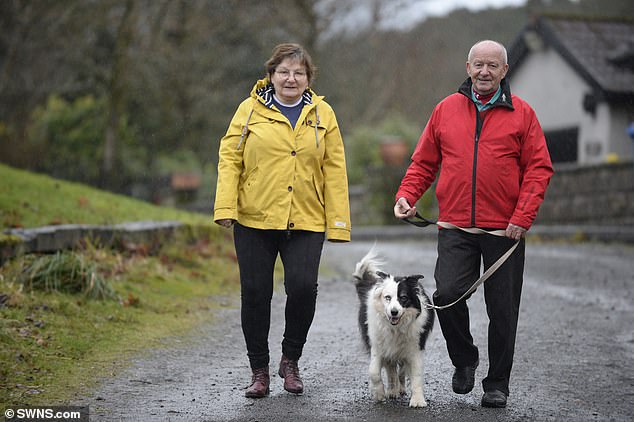 Turmeric+ customer Julie Cully, from Scotland, was one of the first dog owners to try the pet-friendly supplement CurcuPet-K9 with her 13-year-old Border Collie, Blue.

Julie, 59, and her husband Brian, 71, had fantastic results with Turmeric+, so they were keen to see how CurcuPet-K9 could help Blue as she got older.

Julie says: ‘We used to put turmeric in Blue’s food because we knew it was good – but it was nothing like the difference we saw in Blue after just two weeks on CurcuPet-K9.

‘Blue has always been obsessed with running and chasing sticks, but one day she just stopped. So as soon as we heard about CurcuPet-K9 we knew we had to try it and the results speak for themselves.’

Within weeks, Blue had ‘a new lease of life and was back to her old-self’, Julie says. Blue is now more active in the house and able to play with the couple’s two younger dogs

‘She plays again and she’s much happier. It’s tremendous to see her’ says Brian.

CurcuPet-K9 is a dietary food supplement specifically formulated for use in adult dogs. It is not intended to restore, treat or correct physiological function in pets. You should keep your vet advised of any concerns you have about your dog’s health, and make sure they are aware of any supplements your dog is taking.

To claim your £5 off promotional discount, please visit https://futureyouhealth.com/woof895 and your discount will be applied automatically. 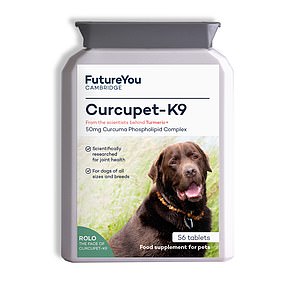 Discount cannot be combined with any other offers or used against existing subscriptions. Further offer terms and conditions available here https://futureyouhealth.com/woof895