Painting a pair of eyes on the rear of a cow could help protect it from being attacked by lions and leopards, a new study has found.

Scientists at the University of New South Wales in Australia, who conducted their research in Botswana’s Okavango Delta region, found cattle painted with eyespots were more likely to survive an approaching predator than those who were unmarked.

The research, which has been published in the scientific journal Nature, could now prove to be a cost-effective tool in reducing the number of livestock that are killed by lions in rural communities.

According to the study, looking at the painted pair of eyes created the illusion that a predator had been spotted and deterred them from approaching their prey. 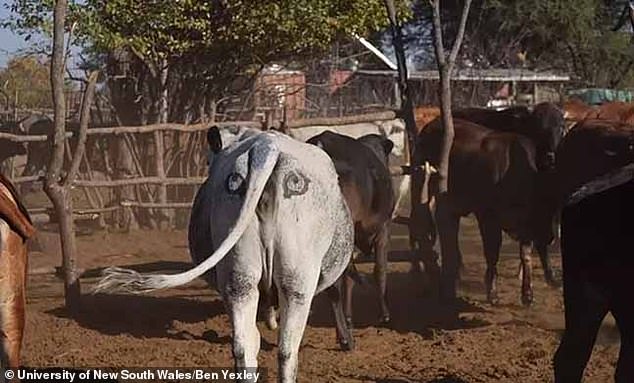 Scientists at the University of New South Wales in Australia, who conducted their research in Botswana’s Okavango Delta region, painted one-third of the cattle with an artificial eyespot

In their four-year-study, scientists painted a total of 2,061 free-ranging cattle from 14 herds in the Delta region that were prone to attacks from lions.

One-third of each herd were pained with an artificial eyespot on their backside, one-third had cross-marks painted on their rear and the remaining third were left unmarked.

Researchers undertook 49 painting sessions before releasing the cattle from overnight fenced enclosures and examining if the marking helped ward off the predators.

They found none of the 683 painted cows had been killed by predators during the study while 15 of the 835 unpainted cows were slaughtered by wild large predators.

In their paper researchers explain that visual signals have been used by a number of creatures to ward off prey.

Moths and butterflies have anti-predator eyespot markings on their wings while many other animal groups, including insects, molluscs and birds use concentric circles to deter predators.

The new findings will now prove an effective tool for farmers who until recently have relied heavily on the use of lethal measures to keep predators away from their cattle. 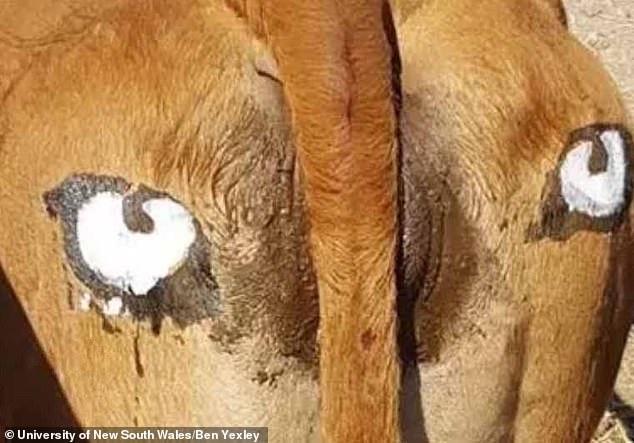 Scientists painted a total of 2,061 free-ranging cattle from 14 herds in the Delta region over the course of four years 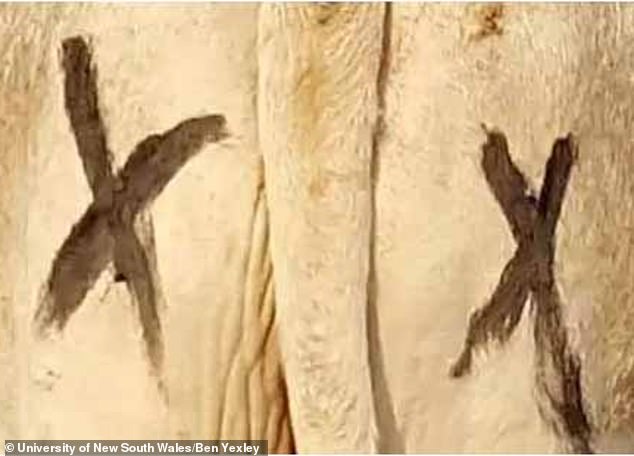 In their paper the researchers write: ‘Our results suggest that artificial eyespots were successful in deterring ambush predators (lions and leopards) from attacking cattle on which they were painted during the study period.

‘Ambush predators killed no artificial eyespot-marked cattle in the study herds, while four procedural control (cross-marked) and 15 unmarked cattle were killed by lions or leopards during the study.

‘There was strong evidence to suggest an overall effect of treatment on survival of cattle.’

Following the results of the study, Dr J. Weldon McNutt, director of the Botswana Predator Conservation, and Tshepo Ditlhabang, the group’s coexistence Officer, said the low-cost approach could reduce the costs of coexistence for some farmers.

They told the South African daily newspaper Times Live: ‘Conflict between farmers and wildlife can be intense along the borders of protected areas, with many communities bearing significant costs of coexisting with wildlife.

‘To our knowledge, our research is the first time that eye-spots have been shown to deter large mammalian predators.

‘We hope that this simple, low-cost approach could reduce the costs of coexistence for some farmers.’