No alcohol. No cars. No shops. Welcome to election day in Bolivia

La Paz: There's almost no traffic in the streets. Supermarkets are shuttered. Movies are closed. Pedestrians stroll through open-air markets set up on car-free avenues, then gather to picnic with the extended family. 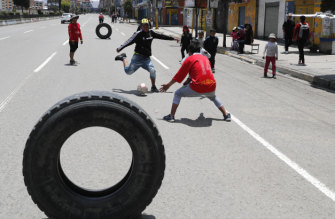 Children play soccer in El Alto, on the outskirts of La Paz, on Sunday. Cars are banned and shops are closed during national elections.Credit:AP

It's election day in Bolivia's capital, an alcohol-free holiday in a country that imposes restrictions on activities during voting hours.

Critics often say countries that hold elections on work days make it tough for voters to go to the polls. Bolivians have no such excuse.

For Carmina Quipe, 41, it's a chance to earn extra money from her street food stall on a day when formal restaurants are forced by law to close. 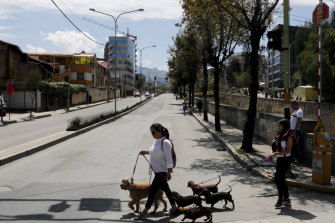 There were few signs of life on the streets of La Paz on Sunday.Credit:AP

"Now I've voted. Now I am going to take the opportunity to sell food to the people who come to vote and eat near the school where they vote," she said. "It's a day when we sell super-well."

Countries around the world commonly impose restrictions meant to avoid possible disturbances on election days. Many ban alcohol and political proselytising. Some prohibit carrying arms, or large gatherings. A few, such as Nigeria, ban most vehicular traffic. Bolivia did all of those Sunday, as President Evo Morales was trying for a fourth straight term.

Sale and consumption of alcohol was banned, even at home. Theatres, shops, restaurants and supermarkets were closed. Electoral authorities prohibited carrying of guns, knives or "heavy and dangerous" objects.

Motorised vehicles were forbidden, except those with a special permit granted to people like doctors, police, authorities and journalists covering the election. 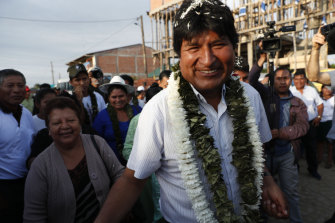 In place of vehicles, the streets were filled with youths playing soccer or bicycling, or street vendors like Quipe.

Police said they had made more than 100 arrests by mid-morning for violations of the rules.

Abraham Rojas, a 33-year-old mechanic, strolled to the polls with his wife, two children and their puppy.

"We're going to take advantage of the good weather to go for a walk," he said, "and later watch what's going to happen with the country."

Morales seeks to extend his reign

Morales – South America's longest-serving leader – was seeking an unprecedented fourth term, but polls suggested the tightest race of his career. 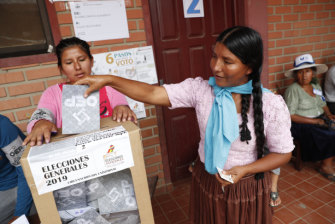 A woman casts her vote in Villa 14 de Septiembre, in the Chapare region of Bolivia on Sunday.Credit:AP

The 59-year-old leftist, who cast his vote shortly after polls opened, was favoured to win the first round vote, but he was likely to be forced into a December runoff where he could be vulnerable to a united opposition.

He allied himself with a leftist bloc of Latin American leaders and used revenues from the Andean country's natural gas and minerals to redistribute wealth among the masses and lift millions out of poverty in the region's poorest country. The economy has grown by an annual average of about 4.5 per cent, well above the regional average.

Morales has been credited for battling racial inequalities, but he has faced growing dissatisfaction even among his indigenous supporters. Some are frustrated by corruption scandals linked to his administration and many by his refusal to accept a referendum on limiting presidential terms.

While Bolivians voted to maintain term limits in 2016, the country's top court – seen by critics as friendly to the President – ruled that limits would violate Morales' political rights as a citizen.

"I'm thinking of a real change because I think that Evo Morales has done what he had to do and should leave by the front door," said Nicolas Choque, a 27-year-old car washer.

Mauricio Parra, 40, who administers a building in downtown La Paz, said he voted for Morales in 2006 in protest against previous centre-right governments.

"He did very well those four years. … (But) in his second term there were problems of corruption, drug trafficking, nepotism and other strange things". That led Parra to vote against repealing term limits in the 2016 referendum.

"He hasn't respected that. That is the principle reason that I'm not going to vote for Evo Morales," he said.

Parra said he was backing Morales' closest rival, former president Carlos Mesa, a 66-year-old journalist and historian who, as vice-president, rose to the nation's top post when his predecessor resigned in 2003 amid widespread protests. He then stepped aside himself in 2005 amid renewed demonstrations led by Morales, who was then leader of the coca growers' union.

An October 4-6 poll by the San Andres Higher University and other institutions showed Morales leading Mesa, 32 per cent to 27 per cent heading into the first round of voting, with the rest split among other candidates.

That would set up a runoff, and the poll showed Morales and Mesa practically tied at just under 36 per cent each in a two-way race – with the rest of those surveyed saying they were undecided, would cast a null ballot or declining to state a preference. The poll surveyed 14,420 people and the margin of error was 2.82 percentage points.

Bolivians will also elect all of the 166 congressional seats. Polls project that no party would have a majority in Congress, which could lead to an impasse for the upcoming administration.