Met Police has revealed the boroughs where the highest number of fines were issued for flouting lockdown – after finding the warm weather created a spike in people ignoring Covid-19 regulations.

Figures released by Scotland Yard today reveal officers issued 973 fines for breaching lockdown between March 27, the first weekend after unprecedented rules were announced, and May 14, days after Boris Johnson began to ease measures.

Boroughs on the edge of West London, Hillingdon, Ealing and Hounslow, saw the 165 fines issued during the same period – the highest number out of any of London’s basic command units. 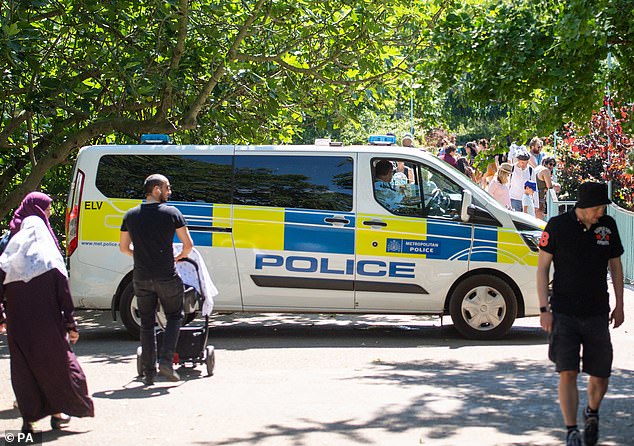 Police continue to patrol St James Park on Sunday to ensure social distancing is in place. Today Scotland Yard has revealed which parts of the capital received the most fines for flouting lockdown 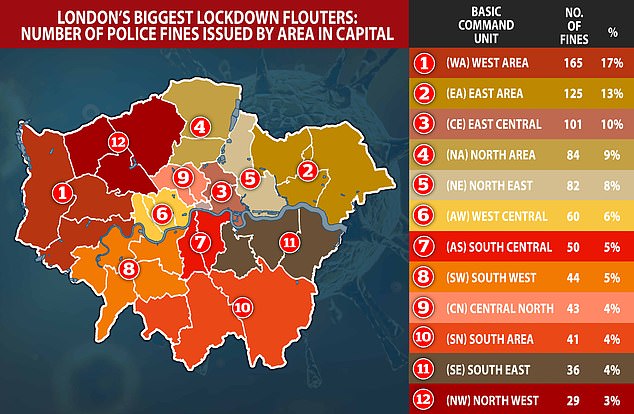 East Area basic command unit, which covers the boroughs of Barking and Dagenham, Havering and Redbridge, had the second highest number of fines issued with 125.

Barnet, Harrow and Brent, in North West BCU, had the lowest number of fines – 29 were issued, making up around three per cent of the Met’s total.

Assistant Commissioner Mark Simmons said: ‘From the start, policing this new legislation has been complex and I’m proud of how both the public and police in London have responded.

The orange line reflects the number of fines issued in the capital, with the grey behind showing the temperature in St James’ Park over time, the highest number of fines came on Easter Sunday

‘Our aim has been to protect London, and not to unnecessarily criminalise where we can avoid it. We have seen, overall, good compliance when we have intervened, meaning in most cases the need for issuing a Fixed Penalty Notice or arrest has been unnecessary.

‘I hope Londoners will be reassured as a result of the low volume of Covid-19 related enforcement that we have been using the new powers only when we have absolutely needed to.

‘We have seen very few arrests of people where they have only been in breach of the Covid-19 regulations and not been committing any other offences which further demonstrates the effectiveness of our approach.’

April 12, Easter Sunday, saw the highest number of fines handed out in London in a single day, 54, with the Bank Holiday weekend proving to be the busiest for officers. 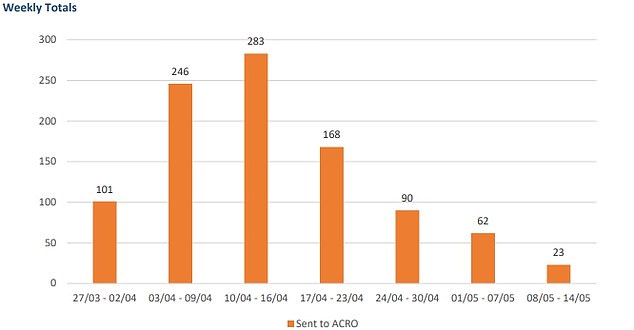 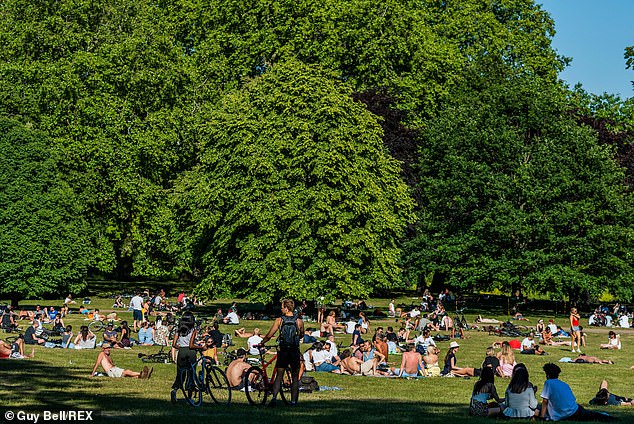 Crowds gather in St James’ Park, London on Saturday. Met Police compared temperatures at the Westminster park with the number of fines issued and established the weather did effect how many people flouted lockdown

A spokesman from Met Police said: ‘Where enforcement has been necessary we have seen a correlation with weather in the early part of lock down, age and gender. 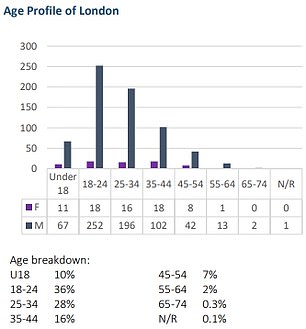 ‘The reasons for this are likely to be complex and reflect a range of factors.

‘This includes interactions between the areas subject to significant proactive policing activity targeting crime hot-spots and both the variation in the age-profile and geographical distribution of ethnic groups in London.’

Advice issued by the College of Policing and the NPCC urged officers to only enforce what is written in law, adding that ‘Government guidance is not enforceable, for example two-metre distancing, avoiding public transport or the wearing of face coverings in enclosed spaces’.

Police have instead opted to engage, explain and encourage the public to follow social distancing guidelines.