Washington: A man who was shot by a Secret Service officer near the White House on Monday evening shouted "I'm going to kill you. I'm going to shoot you," according to two law enforcement officials who are familiar with an internal DC police report.

Those people identified the injured man as Myron Berryman, 51. Police said he remained hospitalised on Tuesday in a critical but stable condition. 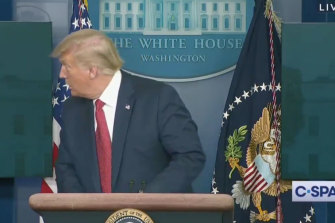 US President Donald Trump abruptly leaves the podium just minutes into a press briefing at the White House.

Berryman, who is 190 centimetres tall, had been a licensed boxer and has lived in Dayton, Ohio; Forrestville, Maryland, and more recently Wheeling, West Virginia.

He had been charged with resisting arrest and disorderly conduct in Maryland's Prince George's County in 2012, and sought to take his case to trial but it ended in a plea in 2013.

Reached by phone on Tuesday morning, Berryman's sister said she couldn't believe her brother would threaten anyone. He is a large man in stature and can appear physically imposing, she said, but she insisted that "he wouldn't hurt anyone".

"They said he had a weapon? He ran toward him?" said the sister. "This is crazy. He is a man of God. He would not have a weapon for sure. His weapon is the word of God."

The sister, who initially was identified in this article, asked to have her name removed because she is concerned about the sensitivity of the case.

After the incident, Trump returned the podium and told reporters about the shooting outside. He said that he had been escorted to the Oval Office.

Asked whether he had been rattled by the incident, he replied, "I don't know," adding, "Do I seem rattled?" He described the shooting as "unfortunate" and said the world has "always been a dangerous place."

World Bank announces $12bn plan for poor countries to buy Covid vaccines
We and our partners use cookies on this site to improve our service, perform analytics, personalize advertising, measure advertising performance, and remember website preferences.Ok