Lockdown relief in sight for regions, but Melbourne must wait

Pubs and restaurants could reopen for outdoor dining and home visits may be permitted in regional Victoria this week after Premier Daniel Andrews flagged a significant easing of restrictions in the regions as early as Tuesday.

But the news was less rosy for Melburnians on Monday, with Chief Heath Officer Brett Sutton confirming strict lockdown rules would continue in the metropolitan area until September 28, despite his prediction that the all-important 14-day average for new COVID-19 cases would drop below 50 by the end of this week. 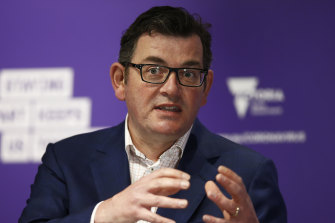 Daniel Andrews addresses the media on Monday, when he flagged good news for regional Victoria.Credit:Daniel Pockett

Mr Andrews said on Monday that he hoped to "have very good news for regional Victoria tomorrow. That is subject to the numbers that come in today."

He said there would be little notice of any changes, adding: "That is preferable [to] making people wait for another week or so."

If regional Victoria moved on to the next step out of lockdown, pubs and restaurants could reopen for outdoor dining, home visits would be allowed, up to 10 people could meet outside, accommodation would reopen and attendee limits at weddings and funerals would lift to 10 and 20 respectively.

In Melbourne, under the state government's road map, restrictions will be partially eased on September 28 if the 14-day average for new cases is between 30 and 50. Asked if that date was "set in stone", Professor Sutton said the extra fortnight was needed to ensure Melbourne could get to "extremely low numbers of cases" and enjoy greater freedoms in the long term.

The state government’s cautious approach was backed by two epidemiologists who spoke to The Age and The Sydney Morning Herald on Monday, but the CEO of the Council of Small Business Organisations Australia, Peter Strong, said he believed restrictions could be safely eased earlier given their impact on business.

There were 35 new COVID-19 cases on Monday and seven more deaths, all of which were linked to aged care. The 14-day average for new cases dipped to 54.4 in metropolitan Melbourne and 3.9 in regional Victoria.

The government and Melbourne City Council have announced a $100 million city recovery fund that would help bars and restaurants pivot to outdoor dining in the summer when restrictions are eased.

And Mr Andrews said two of the city’s biggest sporting events – the Boxing Day Test and Australian Open – would remain in Melbourne and not be delayed, although they would look very different.

"It is too early for us to determine how big any crowd might be [and] teams and players coming from overseas and coaches and officials will all have to quarantine," Mr Andrews said. "It won't be an ordinary summer from that point of view. We will get as many people as we can get there, provided it is safe."

Professor Sutton said work on five suburban contact tracing hubs, announced last week, was under way. He said the government was speaking with local GPs, hospitals and community medical centres, but it was "not a matter to rush".

He called on Victorians to continue getting tested, after just over 8000 people were checked in the 24 hours to Monday – below half of Sunday’s total.

"The issue about lockdown is the pathway out is testing," Professor Sutton said.

Mr Strong called on the state government to either ease restrictions earlier in Melbourne or "explain in proper detail" why this could not be done.

"This is impacting so much on business – there is an opportunity to open up and be safe," he said.

However, epidemiologists Mary-Louise McLaws and Mike Toole supported the government's decision to wait until September 28 before easing restrictions in Melbourne.

Professor McLaws, a World Health Organisation COVID-19 adviser, said a 14-day average of 50 new cases daily in Melbourne was still quite high and Victoria was not out of the woods.

"Professor Sutton is correctly conservative – we have seen other countries that have eased restrictions and then gone back to having a spike in cases," she said.

Professor Toole, from the Burnet Institute, said Melbourne had been through a hard time.

"I think we need to be really confident when we go to the next stage. We don't want to go into a situation like Sydney where we are putting out spot fires for 2½ months," he said.

"Our job is to manage people," he said. "It’s a far more controlled environment being in a pub or restaurant or cafe than having 10 mates over and having a beer."

"But whether that suits other retailers to lose, for example, car parking or access by vehicles is up in the air," she said.

However, she said the timeline to move out of lockdown should be accelerated if infection targets were met early.

"If we’re achieving those ahead of schedule, let’s make sure we’re responding to that and allowing elements of the economy to reopen," she said.

Our weekly newsletter will deliver expert analysis of the race to the White House from our US correspondent Matthew Knott. Sign up for The Sydney Morning Herald‘s newsletter here, The Age‘s here, Brisbane Times‘ here and WAtoday‘s here.

Yes, You Can (and Should) Still Protest Even if You Can’t Be There Physically. Here’s How
We and our partners use cookies on this site to improve our service, perform analytics, personalize advertising, measure advertising performance, and remember website preferences.Ok