As soon as the police arrived, everything changed.

Tensions at Hong Kong international airport had been high all day. The protesters had clearly chosen it under the impression that police would hold back (at least from firing tear and pepper gas) if the protesters were in close contact with civilians who were trying to go about their journeys.

At first it seemed like their strategy had worked. When the announcement came over the tannoy that the airport was closed, cheers erupted from the demonstrators.

Then things began to sour.

A group identified someone they thought was suspicious and mob mentality took over. They claimed he was a Chinese undercover policeman.

They beat him up badly and bound him with cable ties. The man was surrounded by a rabid pack of demonstrators. Some of the protesters wanted to protect him, but others had serious intentions of harm.

The man could well have been a policeman, as shortly after police began to arrive and tried to get inside.

What unfolded next was unlike anything I have ever witnessed in a building like an airport in all my years of reporting.

It was already remarkable that this number of people were able to shut an airport for two days and get away with it. The demonstrations had already been violent, including police having full-on fights with protesters and carrying out very physical arrests.

We all assumed this would simply be a clear-out operation, although I wondered how a situation like this – with many civilians present and thousands of demonstrators, could be dispersed. It would clearly be a big operation. 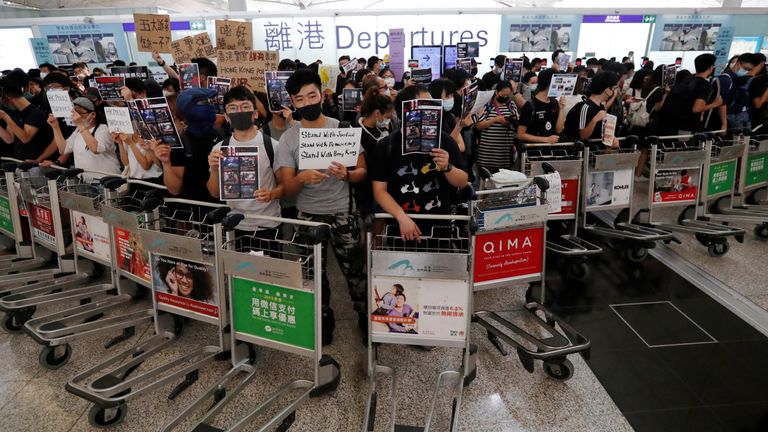 When the first officers arrived – just nine or 10 of them, if that – and stepped into the main airport building, pandemonium erupted.

As paramedics tried to weave through to reach the man, more chaos raged in the crowd.

The police drew back. The mob drove forward. Luggage, trolleys, umbrellas were lobbed like missiles at the officers.

In full retreat, this small group of cops dove back into their vans and attempted to escape but were blocked in by barricades erected by the protesters, who then tried to smash the windows.

I would not be surprised if the officers inside the vans were frightened for their lives.

Luckily for them, reinforcements arrived and riot officers poured out, smacking into protesters to clear a route. They were on a mission to get the stuck police out of danger.

The atmosphere changed. More and more arrived. This was going to be a confrontation. 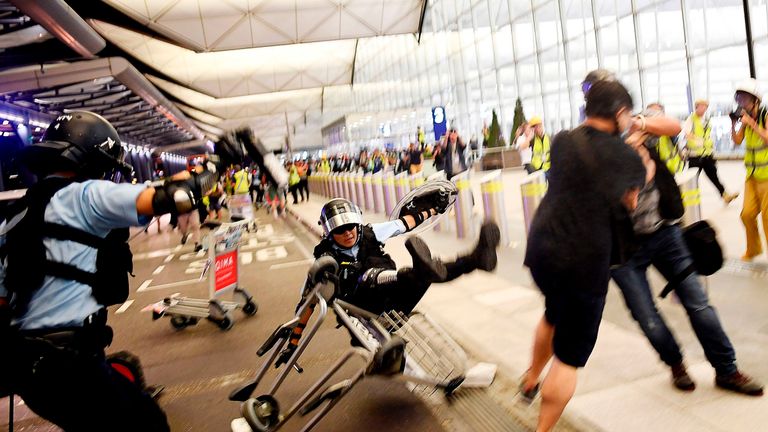 Some of the protesters realised and ran back inside, but others tried to keep charging forward only to be beaten back.

All the time police kept arriving and now seemed to know who they were looking for, ignoring some but grabbing others and throwing them into detention in the back of their vans.

To add to this scene of chaos, because only outbound flights were cancelled at this stage, an enormous jet arrived and passengers began to get off – greeted by the wall of noise coming from the protest.

What tipped the scales for the police was the arrival of a special forces unit. Dressed all in black and highly skilled in martial arts, these guys are serious business. They really are rock hard and you would not be surprised if they could kill a man with one punch.

No one went anywhere near them.

They calmly grabbed the other officers still stuck outside and disappeared.

Meanwhile, inside, a scene from earlier appeared to replay. Another group caught a man they found suspicious. Again, they cable tied him and beat him furiously. He was in a pretty serious condition and not well at all. 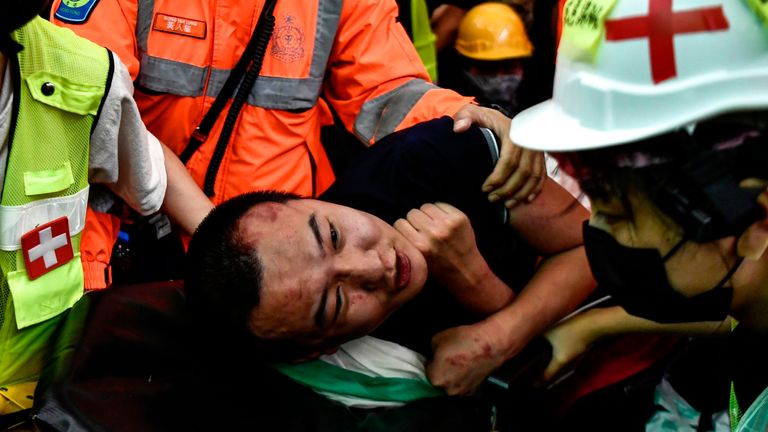 Some people seemed to be considering killing him. Among the items used to hit him with, they pelted him with the now famous symbol of their resistance – umbrellas.

Throughout this 10-week battle, paramedics have assisted both sides and have managed to stay as neutral as possible. Because of this, a group of medics managed to reach the injured man, despite some of the protesters not liking it.

They got him on a gurney and tried to get out. Hands of demonstrators could be seen grabbing and pulling at the man in an attempt to slide him off this life-saving raft.

But the medics managed to save him. Without them, he would probably still be here and dead.

As I write this, many protesters have left. The smell of pepper spray lingers in the air and on my clothes, still involuntarily making my eyes water. 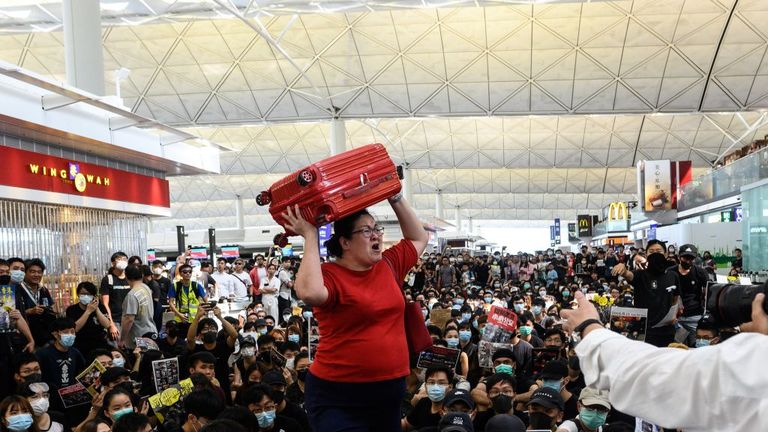 A surreal scene of dazed, frustrated and tired passengers wondering around waiting for check-ins to open and glancing at the boarding signs is beginning to replace the mass of bodies that filled almost every inch of this cavernous airport entrance.

The question now is what is going to happen next?

Harry and Meghan to return £2.4m of taxpayers’ cash spent on Frogmore Cottage… but how will they pay it back – The Sun
Crypto

Harry, Meghan to quit royal jobs, give up 'highness' titles

"You're stealing our water": Germans protest against Tesla gigafactory
We and our partners use cookies on this site to improve our service, perform analytics, personalize advertising, measure advertising performance, and remember website preferences.Ok