Washington: House Democrats unveiled broad legislation on Tuesday to protect the country's elections as they investigate whether President Donald Trump inappropriately solicited foreign election help from Ukraine ahead of the 2020 vote. 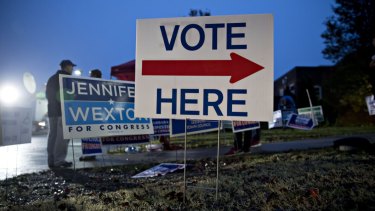 The 2020 election looms in the US.Credit:Bloomberg

A House committee could advance the election security bill as soon as next week. It would tighten the laws around the exchange of campaign information between candidates and foreign governments, require that campaigns report illicit offers of foreign help to the FBI and limit some campaign spending by foreign nationals.

House Democrats are conducting an impeachment inquiry into Trump's dealings with Ukraine, including his request on a July phone call for the country to open an investigation into Joe Biden and his family. Trump says he did nothing wrong and calls the conversation "perfect."

Democrats are also reviewing special counsel Robert Mueller's report, which said there wasn't enough evidence to establish a conspiracy between Russia and the Trump campaign in 2016 despite multiple contacts between the two. Democrats say they want to prevent such interactions in the future – and ensure that campaigns know they are illegal.

"Most Americans know that foreign governments have no business interfering in our elections," said House Administration Committee Chairwoman Zoe Lofgren, who introduced the bill on Tuesday. She said it would ensure "that individuals engaging in conduct with foreign actors intending to influence the outcome of our elections will be held accountable by law."

In a June interview with ABC News, Trump was asked about whether his campaign would accept information on a political opponent from a foreign government or report it to the FBI.

"I think maybe you do both," Trump said in the interview. "I think you might want to listen, there's nothing wrong with listening. If somebody called from a country, Norway, (and said) 'we have information on your opponent' — oh, I think I'd want to hear it."

The House bill would require TV stations, cable and satellite providers and social media companies such as Facebook to make "reasonable efforts" to ensure political advertising is not purchased by people outside of the US, either directly or indirectly, in part by requiring that the customer provide a valid US address.

This summer, Facebook announced it would be tightening its rules around political ads and requiring those who want to run ads pertaining to elections, politics or major social issues to confirm their identity and prove they are in the US with a tax identification number or other government ID.

The legislation would also expand authorities' ability to prosecute those who knowingly spread false information about voting processes such as polling locations and voting days and times along with public endorsements.

The bill specifically prohibits the sharing of such false statements within 60 days of a federal election and provides a maximum penalty of $US100,000 ($148,000) and five years in prison. It also requires the US Attorney General to correct any "credible report of materially false information regarding elections" if state and local election officials have not already done so.

A separate House election security measure passed the House at the beginning of the year, but Senate Majority Leader Mitch McConnell has declined to take it up.