With the total number of cases worldwide now closing in on 900,000, scientists the world over are scrambling to identify vaccines and other treatments. Dr Jacob Glanville, CEO of Distribute Bio, has revealed he and his team have adopted a pioneering approach which offered the potential for dramatic results. He tweeted: “After 9 weeks we have generated extremely potent picomolar antibodies that block known #neutralizing #ACE2 #epitopes, blocking the novel #coronavirus from infecting human cells.”

Speaking to New Zealand Radio’s Checkpoint programme, he added: “I’m happy to report that my team has successfully taken five antibodies that back in 2002 were determined to bind and neutralise, block and stop the SARS virus.

“We’ve evolved them in our laboratory, so now they very vigorously block and stop the SARS-CoV-2 [COVID-19] virus as well.”

The antibodies would make suitable medicines once they had gone through a process of human testing, Dr Glanville explained.

Describing the new virus was a “cousin” of SARS, which emerged in the far east in 2003, he added: “What we’ve done is we’ve created hundreds of millions of versions of those antibodies, we’ve mutated them a bit, and in that pool of mutated versions, we found versions that cross them over. 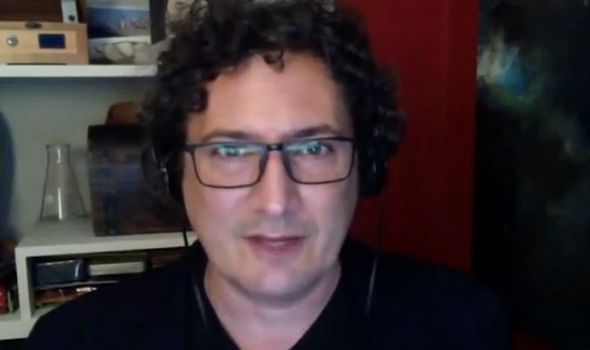 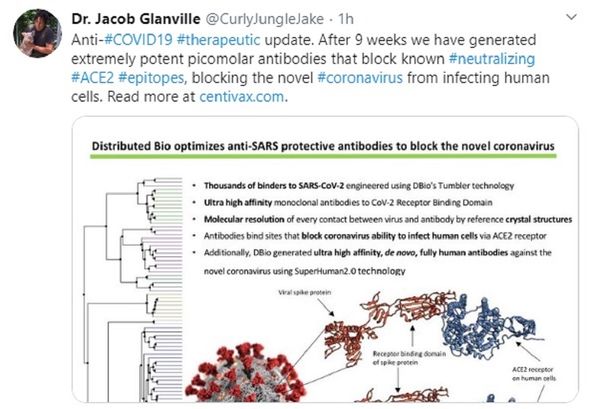 “So now we know they bind on the same spot as the new virus, COVID-19.

“It binds the spot that the virus uses to gain entry into your cells. It blocks that.

“At this point we know it binds the same spot extremely tightly with high affinity.”

Military scientists work with the virus itself, Dr Glanville stressed, as he did not want either COVID-19 or SARS in his lab. 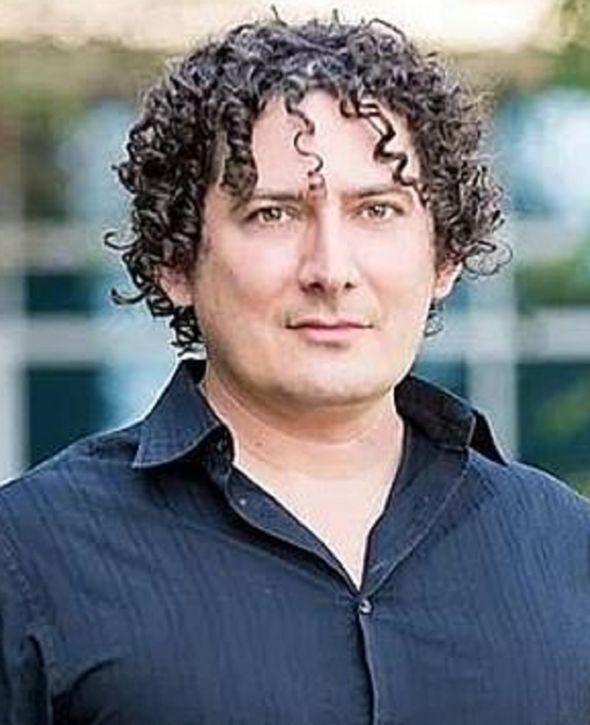 He said: “The next step is we send the antibodies to the military, and they will directly put those on the virus and show that it blocks its ability to infect cells.

“The other nice thing about it is you want the stamp of approval of a government military to independently test your work.

“This is one of the foundations of good science.”

Dr Glanville added: “Antibodies are attractive because you can give them to a patient right when they’re in the hospital like an antiviral. 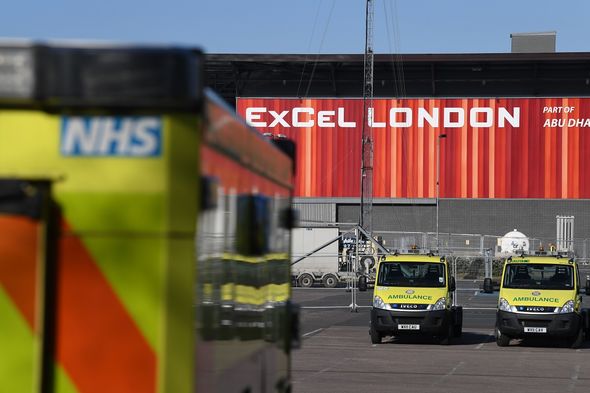 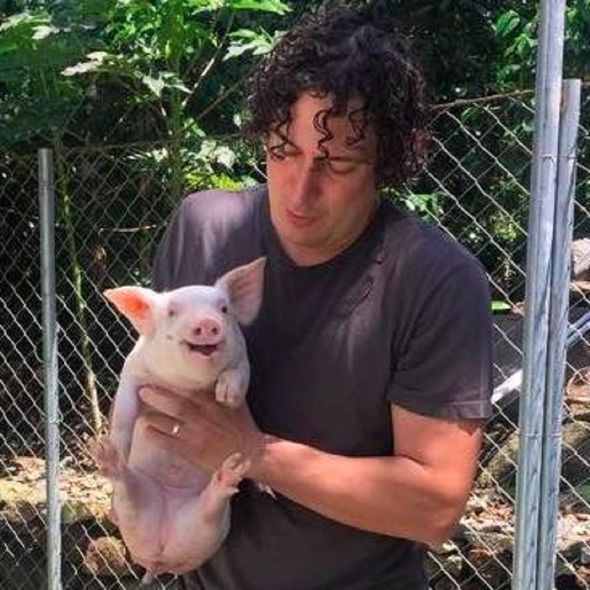 “You can also give them to doctors, you could give them to the elderly people to prevent them from getting sick.”

Other scientists around the world are also working on developing antibodies, Dr Glanville said, while emphasising his belief that he and his team had a head-start.

He explained: “Part of the reason we think we’re moving pretty fast is that instead of starting from scratch discovering an antibody, we went to these existing antibodies that were already extremely well characterised against SARS. And we’ve adapted them. So we’re piggybacking on two years of research.

“It’s sort of like a short-term vaccine, except it works immediately.

“A vaccine could take six to eight weeks to take effect, where this will take effect within 20 minutes. You could give it to a patient who’s sick, experiencing COVID-19, then within 20 minutes of receiving the shot, their body is flooded with those antibodies.”

Unlike a vaccine, antibodies would only offered short-term protection, perhaps between eight and 10 weeks, Dr Glanville stressed, but nevertheless if it worked it would have the potential to relieve pressure on health services significantly.

And crucially, treatments could theoretically be available by the autumn.

Dr Glanville said: “We use very exacting manufacturing standards called GMP for making a medicine, and that can take multiple months. 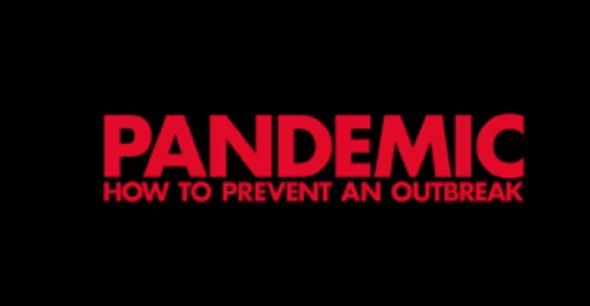 “Once that material is ready we go into a human trial.

“That’s a trial where you give it to a series of 400 to 600 people who are in hospitals experiencing symptoms, and then you watch over the next five to 10 days to see whether it helped or not.

“We have saved potentially years of research by piggybacking on the SARS antibodies and our technology is very good at engineering these things to cross and we’ve succeeded in doing that.

“The next step, the big-time consuming part, is the GMP manufacturer. Traditionally, that takes nine to 12 months, obviously, we can’t wait that long. So we’ve worked with two different partners to try to accelerate that to take a few months but that does take time and there’s really no way around.” 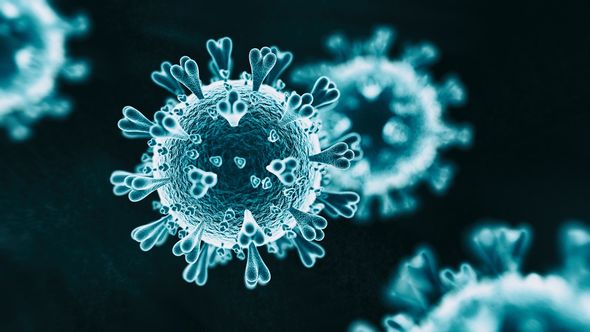 “Assuming that we’re able to complete our study, at the end of summer and it looks good, then we would use something called compassionate use.

“So that’s as fast as we can conceive of having this medicine widely available.”

Pandemic: How to Prevent and Outbreak is a six-part series released on Netflix on January 22, 17 days after the World Health Organization announced the first cases of COVID-19.

It profiles the men and woman leading the fight against influenza, as well as predicting where the next global pandemic will come from – although given it was filmed several months earlier, there is no reference to the one which was already taking hold.