Brazil tops 30,000 coronavirus deaths with a record 1,262 fatalities in the last 24 hours as the disease continues to rip through South America’s worst-hit country

Brazil surpassed 30,000 deaths from the coronavirus outbreak on Tuesday as the disease continued to rip through South America’s worst-hit country.

Figures released by the health ministry showed a new record 1,262 deaths in the previous 24 hours, as well as 28,936 new infections.

The figures come as some Brazilian states began to emerge from weeks of economically-stifling quarantine measures despite warnings from the WHO and epidemiologists.

The overall number of confirmed cases – 555,383 – makes Brazil the second most affected country after the United States.

The official COVID-19 death toll of 31,199 released on Tuesday is the fourth-highest in the world, after the US, Britain and Italy.

Experts estimate the real number of infections could be up to 15 times higher than official figures, given relatively little testing across the vast country of 210 million. 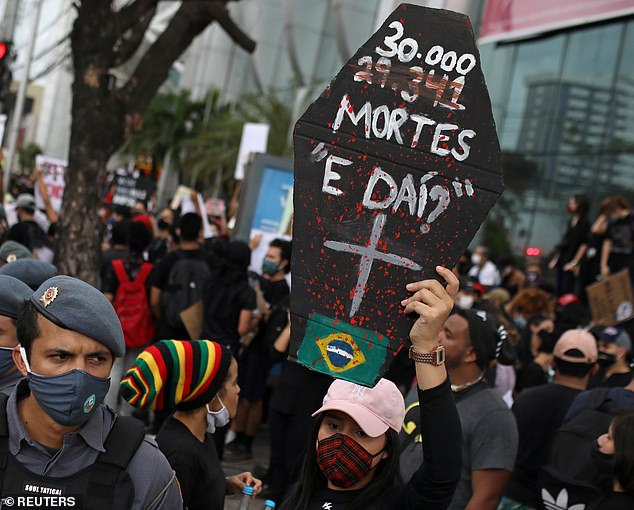 An anti-government protester takes part in a protest called ‘Amazonas for Democracy’ on June 2, 2020 against the country’s president Jair Bolsonaro and his approach to tackling the coronavirus crisis, which has now seen more than 30,000 related deaths in the country. The protester’s sign reads ‘30,000 deaths. “So what?”‘

The fresh record comes as some Brazilian leaders, including right-wing President Jair Bolsonaro, continue to belittle the virus, warning that the economic fallout from quarantine measures will be worse than the virus itself.

‘We lament all deaths, but it’s everyone’s destiny,’ Bolsonaro said in front of the presidential residence in Brasilia earlier on Tuesday.

Even in states and cities where leaders had previously instituted lockdown orders, authorities have been rapidly loosening restrictions in recent days, despite the number of daily new cases continuing to grow in most regions.

Sao Paulo state on Tuesday recorded its highest daily figures for both deaths and infections, on the day when cities across the state began reopening shopping malls and offices.

In Sao Paulo itself, Mayor Bruno Covas has put back reopening non-essential businesses until after June 15. 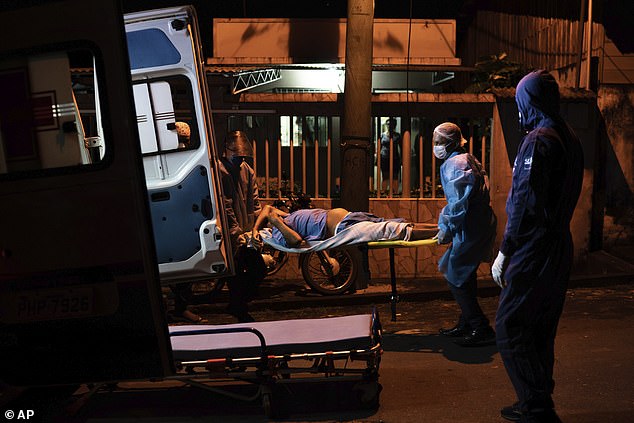 Pictured: Emergency workers carry an elderly patient to an ambulance, amid the coronavirus outbreak in Manacapuru, Amazonas state, June 2, 2020. Brazil has recorded 555,383 cases of coronavirus, and is second only the U.S. in numbers of cases. Experts estimate that the figure could be 15 times higher than the official number 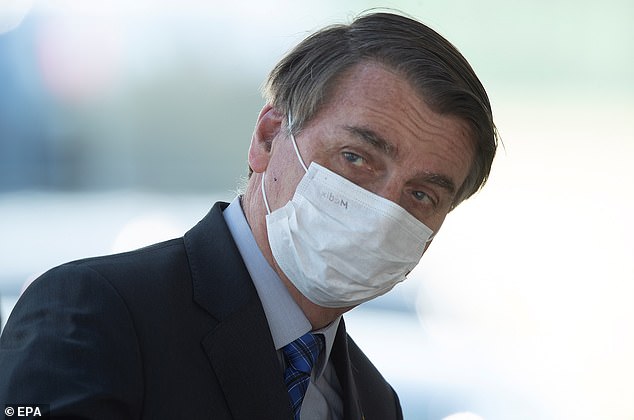 Brazil’s right-wing President Jair Bolsonaro, pictured on June 2, 2020 in Brasilia leaving the Palacio do Alvorada, headquarters of the presidency. Bolsonaro has been heavily criticised for his attitude towards the coronavirus crisis

‘In the current situation, relaxing the measures is adding gasoline to the fire,’ Rafael Galliez, an infections expert at the Federal University of Rio de Janeiro, told AFP.

The regional office of the World Health Organization warned Brazil on Tuesday against reopening ‘too quickly as there is a risk of a resurgence of COVID-19.’

The health ministry said there was ‘no way to specify when the peak of deaths will occur’ due to the country’s size and geographic diversity.

Brazil’s health crisis has merged with a political crisis, as far-right President Jair Bolsonaro has openly clashed with local authorities that insist on lockdown measures. 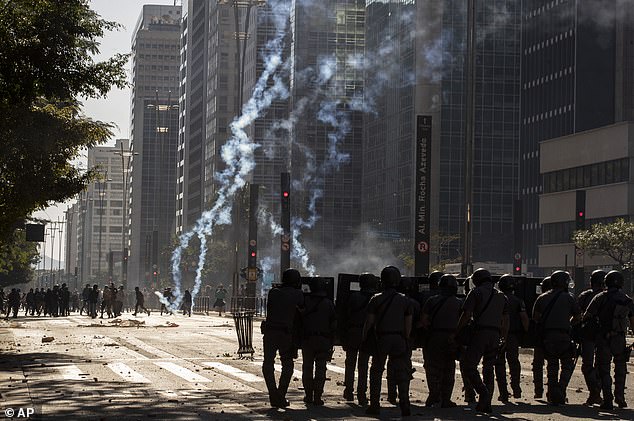 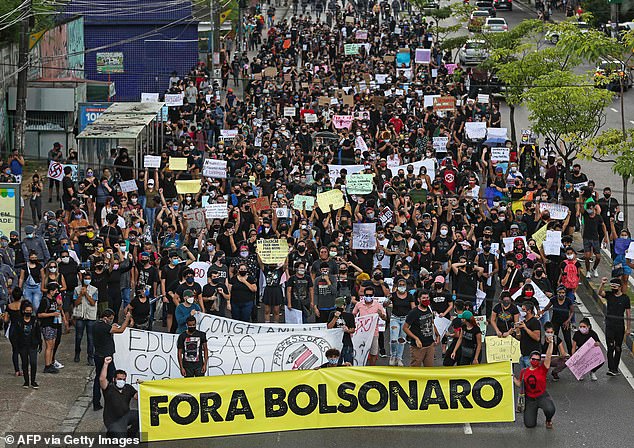 The ‘Amazonas for Democracy’ march, pictured making its way through Manaus on June 2, 2020, was a demonstration against fascism and Bolsonaro. The banner at the front of the march calls for Bolsonaro to leave office,with ‘Fora’ meaning ‘Out’

Meanwhile, Brazil has seen days of protests. On Monday, Bolsonaro urged his supporters to put off their protests against the country’s Supreme Court next weekend after counter-demonstrations triggered violent clashes on Sunday.

Bolsonaro’s critics say he has undermined democracy by endorsing almost weekly protests against the top court, which authorised an investigation into the president for allegedly interfering with police appointments for personal motives.

Activists clashed with police over the weekend as they marched in solidarity with the Black Lives Matter movement in the United States, which itself is seeing swathes of protests across the country.

Some activists in Brazil were protesting against police brutality in the country, whose capital Rio saw a record number of police killings in 2019 – 1,814 – and whose political leadership has said it would ‘dig graves’ to stop crime.

Anti-fascist Protesters in the northwestern Amazonas region also took to the streets of Menaus in a demonstration against Bolsonaro.

The group, calling themselves ‘Amazonas for Democracy’, held signs calling for the president to be ousted from government, with one holding a sign, shaped as a coffin, that said ‘30,000 deaths, “so what?”‘

Big Tech may not be afraid of a boycott. But it might fear a regulator

Do or Die For Bitcoin Bulls: Here’s What Could Trigger A Sharp Decline
We and our partners use cookies on this site to improve our service, perform analytics, personalize advertising, measure advertising performance, and remember website preferences.Ok