The founders of Australia’s first women-only mental health hospital say women are avoiding treatment because they feel unsafe in mental health wards housing both genders at a time when the pandemic has driven family violence and serious mental health issues to record highs. 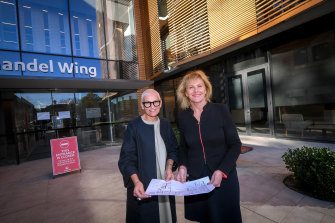 “A lot of women don’t get help because the thought of having to go into a shared mental health space makes them feel unsafe,” Ms Sherwood said. “The increase in domestic violence has reinforced the need for gender-specific mental health care.”

Cabrini’s 30-bed centre, Australia’s first women-only mental health hospital, will specialise in the treatment of depression and anxiety, post-traumatic stress disorder and addiction and offer gender-targeted therapies. The private hospital will open in September and offer stays of up to 10 days.

Cabrini Health CEO Sue Williams said the Lisa Thurin Women’s Health Centre would offer 24/7 admission. She expected demand to be high as women’s mental health had fared worse than men’s during the pandemic.

In September 2020, psychiatrists reported a record number of Victorian women were requiring mental health treatment, including many who had not previously reported problems. 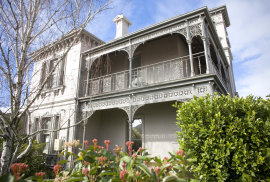 The Lisa Thurin Women’s Health Centre will operate from an Elsternwick property already owned by Cabrini.

“Particularly during the pandemic, the incidence of mental health problems has increased extraordinarily; we already know women are twice as likely to have anxiety or depression and two times more likely to experience PTSD and a whole range of [other] things,” Ms Williams said.

“Because of social isolation and financial hardship, the increase in mental health issues has just grown and will be a longstanding problem for the next 10 years.”

Reported rates of violence against women during the pandemic increased, with police recording an overall rise in family violence incidents of 9.4 per cent in 2020 compared with 2019.

“Because we are a mission-based organisation, we thought it was important to address unmet need for those vulnerable women,” Ms Williams said.

The centre will operate from a refurbished property owned by the group in Elsternwick and will include up to five beds available to patients in the public system. Ms Williams said stays in traditional mental health hospitals lasted an average of 18 to 20 days, but under the Cabrini model women would stay for a maximum of 10 days, then be “intensively” supported with a mix of telehealth, home visits and day programs run by case managers to try to help them avoid readmission.

Ms Williams said feedback from doctors, psychiatrists and the community on the venture had been so strong that Cabrini was already considering ways to expand the service or to build a satellite centre in another part of Melbourne.

Ms Sherwood said women who had experienced “addiction by stealth” during the pandemic – creeping dependence on substances including alcohol – could be helped by the new hospital.

“For a cohort of middle-class females, there’s a lot of stigma around [addiction]. You don’t tell anyone. It’s the same with domestic violence; people think in the ‘leafy eastern suburbs’ there is not as much domestic violence. It’s in there just as much as in other areas of Melbourne, but it’s hidden,” she said.

“They’re violent places, as a … female who has an addiction problem or is suffering from PTSD or some kind of complex trauma, do you really want to put yourself in that situation to get better? They’re not trauma-informed environments.”

Four psychiatrists have been hired for the hospital, which is being housed in a former rehabilitation home owned by Cabrini. Rooms in the hospital will be named after prominent Australian women.