A man fatally shot by police in Illinois was covered by a blanket ‘while he was still breathing’ and was left to die, his girlfriend says 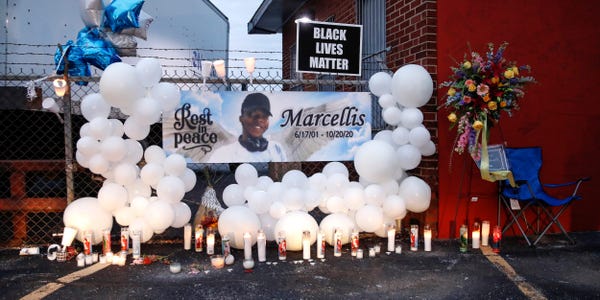 Tafara Williams, a Black woman who survived an October 20 police shooting in Illinois that killed her boyfriend, Marcellis Stinnette, says officers covered him with a blanket after he was shot and left him there to die.

Williams, 20, spoke to reporters from her hospital bed via Zoom on Tuesday, where she described the shooting that killed 19-year-old Stinnette in Waukegan, Illinois.

"They laid Marcellis on the ground and covered him up with a blanket while he was still breathing," Williams said during the zoom, NBC News reported. "I know he was still alive."

"They allowed him to die," she later added, according to The Guardian. "They wanted us to bleed out on the ground."

The Waukegan police officer who shot Stinnette and Williams has not been publicly named but the department confirmed he was fired on Friday. Department Commander Edgar Navarro said in a press release reported by multiple outlets the officer was fired after he carried out "multiple policy and procedure violations."

The shooting happened just before midnight on October 20.

Waukegan Police initially described the incident as a traffic stop gone wrong, but Williams' description of the incident seemed to contradict what law enforcement said.

Police accused Williams of fleeing the scene after a police officer approached her car, then reversing her vehicle toward another officer, who said he opened fire out of "fear for his safety," CNN reported.

According to multiple reports, Williams said on Tuesday that she and Stinnette were in a parked car smoking shortly after putting their 7-month-old baby to sleep when an officer pulled up to their car.

"I rolled down my windows and turned on all the lights inside the car so the officer could see I had no weapons and I wasn't doing anything illegal," Williams said, according to the Chicago Sun-Times.

She said the officer said he knew Stinnette from jail and held his hand on his gun in its holster as he approached them.

Williams said she asked if they were under arrest or if they could leave, and as the officer stepped away without saying anything, she slowly started to drive away.

"I drove away very slowly because I was scared to get out of the car," she said in the Zoom conference call, according to ABC News. "I drove out to MLK and turned onto it, the officer was not following me, the police lights were not on, when I turned onto MLK it seemed like there was another officer there waiting for us."

She said that at that point she lost control of the car and ended up slamming into a building. As she told the officer she didn't have a gun, Williams says the officer opened fire.

"He told me to get out of the car. I had my hands up and I couldn't move because I had been shot," Williams said. "Marcellis had his hands up. I kept asking him why why he was shooting. My blood was gushing out … They would not give us an ambulance until we got out of the car."

She said the officer eventually dragged her away from Stinnette before she was "ignored" when she asked police to examine Stinnette's wounds, and watched as officers put a blanket over Stinnette's body.

Williams and Stinnette were eventually both taken to a nearby hospital, where Stinnette died.

Lawyers for Williams' and Stinnette's families, Ben Crump and Antonio Romanucci, called for Waukegan officials to conduct a criminal investigation into the officer's actions at the press conference. The FBI and Illinois State Police are investigating the shooting.

Waukegan Police did not immediately respond to Insider's request for comment.

Beware of these 4 home and auto insurance scams

IATSE To President Biden: Stagehands Can Convert Theaters And Arenas Into Covid Vaccination Sites
We and our partners use cookies on this site to improve our service, perform analytics, personalize advertising, measure advertising performance, and remember website preferences.Ok