WASHINGTON — Gov. Jay Inslee, who focused his presidential campaign on the threat of climate change, has ended his bid for the White House.

The Democrat made the announcement Wednesday during an interview on MSNBC.

His decision comes a week before the cutoff date to qualify for next month’s Democratic primary debate in Houston.

Inslee, 68, has served as the governor of Washington since 2013. Previously, he served in the U.S. House of Representatives from 1993 to 1995 and from 1999 to 2012. After a failed run for governor in 1996, he served as a regional director of the Department of Health and Human Services under President Bill Clinton.

Inslee announced his candidacy in March, emphasizing the issue on which he staked his campaign: aggressive climate action.

“Our country’s next mission must be to rise up to the most urgent challenge of our time: defeating climate change,” Inslee said in his campaign announcement video. Inslee’s team released many detailed policy plans on his website, though they were framed primarily within the context of climate action.

“We have to act now,” Inslee said during the second Democratic primary debate. “Look: climate change is not a singular issue, it is all the issues we Democrats care about — it is health, it is national security, it is our economy.”

During the first Democratic debate, Inslee grilled former Vice President Joe Biden on his own plan to tackle climate change. “Mr. Vice President, your argument is not with me, it’s with science,” he told Biden. “And your plan is just too late.”

When asked if he would lead the country in moving away from coal- and fracking-based energy, Biden said he’d “work it out… we will make sure it’s eliminated and no more subsidies for either of those, any fossil fuels.”

“We cannot work it out,” Inslee interrupted. “The house is on fire.” 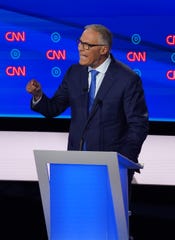 Inslee’s team fundraised $2.25 million during the first quarter of his campaign and $3 million during the second. Although his polling and funding numbers were well behind those of top tier candidates, Inslee’s bold message about climate change drew strong support from the few it reached.

The super PAC Act Now On Climate raised about $2.2 million of Inslee’s total haul from eight donors, as they reported to the Federal Election Commission in August.

Inslee was one of only three Democratic candidates whom super PACs supported during this election cycle, along with former Colorado Gov, John Hickenlooper and New Jersey Sen. Cory Booker. Of the three, Inslee was the only one to embrace a super PAC’s support.

In a tweet Wednesday night, Inslee told his followers that “I know you agree that our mission to defeat climate change must continue to be central to our national discussion — and must be the top priority for our next president.”