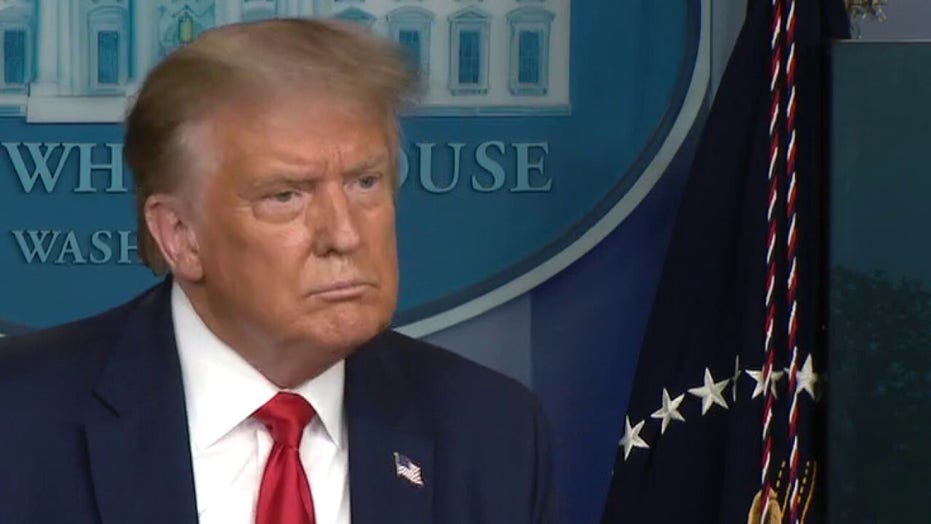 Trump: Universal mail-in ballots a ‘disaster,’ will be ‘great embarrassment to country’

President Trump said Monday that it could take two months for Americans to see a result from November's presidential election – a comment that came amid a tense back-and-forth over the merits of universal mail-in voting during an interview with Axios journalist Jonathan Swan.

The comments during the "Axios on HBO" interview come as the debate over universal mail-in voting — which many states are doing despite Swan incorrectly asserting otherwise several times during the interview – has reached a fever pitch. Universal mail-in voting is a relatively novel practice in the U.S. in which states, largely because of the coronavirus pandemic, are mailing ballots (not applications for ballots) to all voters whether they request one or not.

Inauguration Day is about two-and-a-half months after Election Day. Swan replied that there is nothing necessarily wrong with having a delayed result, as long as the result is correct.

"It could be decided many months later," Trump said. "Do you know why? Because lots of things will happen during that period of time. Especially when you have tight margins, lots of things can happen. There's never been anything like this … Now, of course, right now we have to live with it, but we're challenging it."

The president was referencing the lawsuits the Republican National Committee (RNC) and his campaign are bringing against some states over universal mail-in voting or other, similar issues.

Trump also tweeted Monday that the "Post Office could never handle" the increased number of mailed ballots "without preparation."

Democrats, on the other hand, have cited studies saying voter fraud via mail is relatively rare in the U.S., and noted that Trump and many on the right have voted via mail with absentee ballots — ballots a voter requests through a process before mailing in their vote. But universal mail-in voting has never been tried on the scale Democrats propose this fall, with the aim of keeping voters safe from the coronavirus.

Already, increased mail-in voting has led to problems throughout the country, including four men being charged with voter fraud in Paterson, N.J., 100,000 ballots rejected in California during the March presidential primary, and more.

But presumptive Democratic presidential nominee Joe Biden has accused Trump of trying to "indirectly steal" the election by casting doubt on the reliability of universal mail-in voting.

And in Nevada, which just passed a new law that made it the eighth state to automatically send all voters mail-in ballots, the Democratic leaders in its legislature condemned Trump and RNC Chairwoman Ronna McDaniel for their criticism of the move.

"The comments made by President Trump and RNC Chairwoman Ronna McDaniel regarding Assembly Bill 4 are disgraceful and patently false," Nevada Senate Majority Leader Nicole Cannizzaro and Assembly Speaker Jason Frierson said. "This is a clear fear-mongering attempt by the GOP to suppress voters this November as part of an effort to shield themselves from the backlash of a failed administration."

And Nevada's Democratic Gov. Steve Sisolak, in a series of tweets Monday, expressed confidence that his state would be able to hold "a safe, fair and accessible election."

"This bill will help prevent Nevadans from experiencing the long lines at polling locations they faced during the primary election, which will protect their safety, safeguard their right to make their voices heard, and help reduce the spread of COVID-19," he said.