President Donald Trump on Wednesday issued a full pardon for Conrad Black, a former media mogul who was convicted of obstruction of justice and fraud in 2007.

Black, 74, once owned one of the world’s largest English-language newspaper empires, Hollinger International, but was charged with stealing millions from investors. He was sentenced to 6.5 years in prison in 2007 on multiple fraud charges and one charge of obstruction after a judge said his crimes amounted to “very serious acts.” Two of the fraud charges were later overturned, but Black still served 3.5 years in prison.

He was released in 2012 and deported to Canada, where he now lives.

Black wrote in a statement that Trump “could not have been more gracious and quickly got to his point, that he was granting me a full pardon, that would ‘Expunge the bad wrap [sic] you got,’” Canada’s CTV reported.

The businessman has spent the past few years lavishing praise on Trump and even wrote a book about the president, calling him a leader “like no other.” He also regularly writes editorials lauding Trump and tearing down his political enemies. 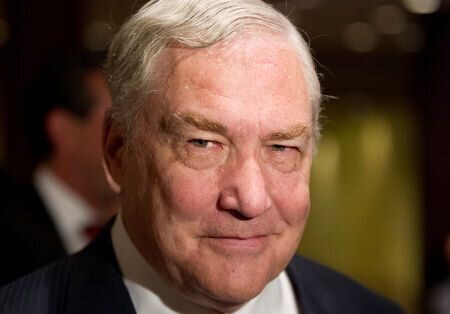 The White House championed Black as an “entrepreneur and scholar” in a statement announcing Trump’s decision, saying he had made “tremendous contributions to business.”

“Lord Black’s case has attracted broad support from many high-profile individuals who have vigorously vouched for his exceptional character,” press secretary Sarah Huckabee Sanders said in a statement. “Consistent with his distinguished reputation for helping others, while in prison, Lord Black served as a tutor for 150 students, helping them achieve their educational goals. In light of these facts, Mr. Black is entirely deserving of this Grant of Executive Clemency.”

Trump has pardoned several of his most vocal defenders since he took office, including the conservative activist Dinesh D’Souza and former sheriff Joe Arpaio. He also issued a pardon to Dick Cheney’s former chief of staff, Scooter Libby, and a former U.S. soldier convicted of killing an Iraqi prisoner, among others.

Black had gone after a presidential pardon before without much luck. He asked former President George W. Bush for clemency in 2008 but was rebuffed.