President Trump announced Sunday that the U.S. government "must" again pursue the death penalty for Boston Marathon bomber Dzhokhar Tsarnaev, after a federal appeals court Friday threw out the death sentence because the judge who oversaw the case did not adequately screen jurors for potential biases.

A three-judge panel of the 1st U.S. Circuit Court of Appeals has ordered a new penalty-phase trial on whether 27-year-old Tsarnaev should be executed for the 2013 attack that killed three people and wounded more than 260 others.

"Rarely has anybody deserved the death penalty more than the Boston Bomber, Dzhokhar Tsarnaev," Trump wrote on Twitter Sunday. "The court agreed that this 'was one of the worst domestic terrorist attacks since the 9/11 atrocities.' Yet the appellate court tossed out the death sentence. So many lives lost and ruined. The Federal Government must again seek the Death Penalty in a do-over of that chapter of the original trial. Our Country cannot let the appellate decision stand. Also, it is ridiculous that this process is taking so long!"

An attorney for Tsarnaev said after his sentence was tossed that they are grateful for the court's “straightforward and fair decision: if the government wishes to put someone to death, it must make its case to a fairly selected jury that is provided all relevant information."

“But make no mistake: Dzhokhar will spend his remaining days locked up in prison, with the only matter remaining being whether he will die by execution,” Judge O. Rogeriee Thompson wrote in the ruling, more than six months after arguments were heard in the case.

The Justice Department (DOJ) had been expected to appeal even before Trump's tweet. Legal observers predict prosecutors will turn straight to the U.S. Supreme Court without asking for a hearing before the full 1st Circuit. The U.S. government recently resumed federal executions following a 17-year pause and, under Trump, has pursued capital punishment in an increasing number of cases. 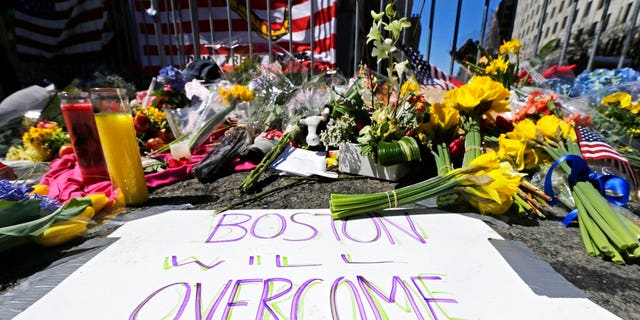 FILE – In this April 17, 2013 photograph, flowers and signs adorn a barrier, two days after two explosions killed three and injured hundreds, at Boylston Street near the of finish line of the Boston Marathon at a makeshift memorial for victims and survivors of the bombing. A federal appeals court has overturned the death sentence of Dzhokhar Tsarnaev in the 2013 Boston Marathon bombing, Friday, July 31, 2020, saying the judge who oversaw the case didn’t adequately screen jurors for potential biases. (AP Photo/Charles Krupa, File)

Tsarnaev’s case is uniquely complicated in that an entire city — if not the whole country — considered itself the target of the bombing, said George Kendall, an attorney who filed a brief contending it was a mistake to hold the trial in Boston. Prosecutors said Tsarnaev and his brother intended the attack to punish the U.S. for wars in Muslim countries.

Should Friday's ruling stand, however, attention will shift to whether an impartial jury can be impaneled in a city still traumatized by the 2013 attack. Tsarnaev's defense team may renew its request to transfer the case out of Boston, where they have long contended public opinion is immutably slanted.

"He is a threat to all of us and he needs to die."

The mother of Krystle Campbell, a 29-year-old killed in the attack, expressed outrage at the court's decision.

“I just don’t understand it,” Patricia Campbell told The Boston Globe. “It’s just terrible that he’s allowed to live his life. It’s unfair. He didn’t wake up one morning and decide to do what he did. He planned it out. He did a vicious, ugly thing.”

“He needs to die,” survivor Adrianne Haslet wrote on Instagram about Tsarnaev, who was convicted and sentenced to death in 2015.

Haslet, 40, a dancer who lost a leg in the attack, was one of 17 people left without at least one limb as a result of blasts set off by bombs that Tsarnaev and his brother, Tamerlan Tsarnaev, planted as a crowd gathered near the finish line one of America’s most famous running events.

The brother was killed in a shootout with police after a manhunt.

“The death penalty should be used in this particular case,” Haslet wrote. “This terrorist admitted in court he was guilty of crimes committed against our country. He confessed. … He is a threat to all of us and he needs to die.”

Another attack survivor, Rebekah Gregory, wrote on Twitter that the court’s decision was “Disgusting.” Gregory, 32, a young mother, also lost a leg as a result of the attack.

“So people are sitting on death row for far less, and the US Appeals court chooses to overturn the sentence of this COWARD??!” Gregory wrote.

“All this does is give him the attention he wants, and prolongs the nightmare we have been living the last SEVEN years. Disgusting.”

Fox News' Dom Calicchio and The Associated Press contributed to this report.