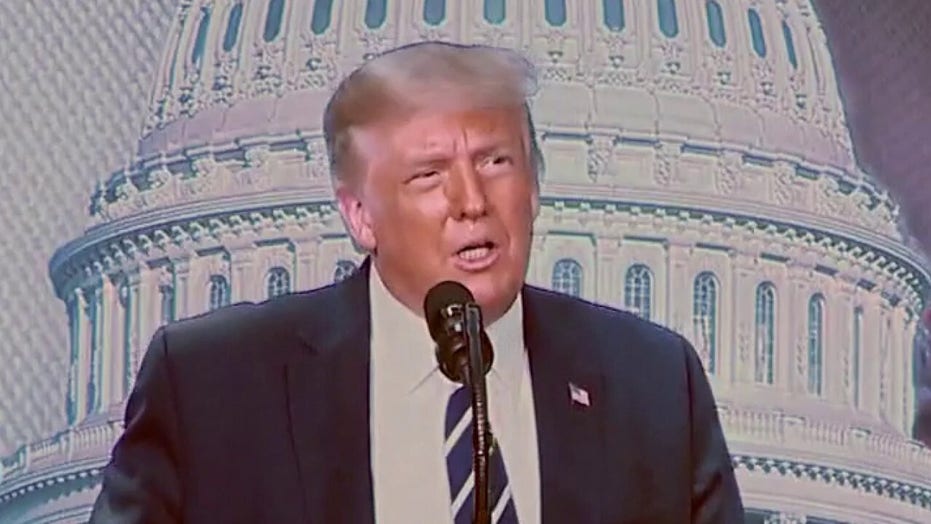 President Trump on Saturday accused the “deep state” at the Food and Drug Administration of making it hard for drug companies to test coronavirus treatments — and suggested the agency is trying to delay them until after Election Day.

“The deep state, or whoever, over at the FDA is making it very difficult for drug companies to get people in order to test the vaccines and therapeutics,” he tweeted. “Obviously, they are hoping to delay the answer until after November 3rd. Must focus on speed, and saving lives!”

He also tagged FDA Commissioner Stephen Hahn in the tweet. Trump later re-tweeted a Twitter Moments story from June that reported on the FDA’s decision to revoke emergency-use authorization for hydroxychloroquine — a drug Trump has promoted as a "game changer" in the pandemic.

“Many doctors and studies disagree with this!” he said.

Trump has repeatedly urged agencies to push forward with experimental treatments as part of the effort to move beyond the virus and reopen the country. But some in those agencies and other federal officials have been more cautious.

Trump’s tweet appears to be partially in response by a move by the FDA to stop the planned emergency use authorization for blood plasma as a treatment for COVID-19 patients.

The FDA was reportedly planning last week to allow emergency use of blood plasma. But The New York Times reported that the authorization is now on hold after experts, including Dr. Anthony Fauci, said evidence supporting the move  was not strong enough.

The FDA often approves emergency-use authorizations during public health emergencies when there are no other adequate and available alternative treatments.

In May, Trump announced that the FDA authorized emergency use of Gilead Science's experimental antiviral drug remdesivir after early results of a clinical study indicated the drug helps speed recovery from coronavirus. But it had also revoked authorization for hydroxychloroquine in June.

Trump has hailed plasma as a “beautiful ingredient” that can be used to improve the conditions of those suffering from the virus.

H. Clifford Lane, clinical director at the National Institute of Allergy and Infectious Diseases, told the Times that the authorization was on hold pending more evidence, but it could be granted in the near future.

“The three of us are pretty aligned on the importance of robust data through randomized control trials, and that a pandemic does not change that,” Dr. Lane said, referring to himself, Fauci and Dr. Francis Collins, director of the National Institutes of Health.

Trump had a similar response when asked at a White House press briefing Wednesday about the halting of the authorization.

“Well, I hear great things about [plasma]…That’s all I can tell you.  And it could be a political decision, because you have a lot of people over there that don’t want to rush things because they want to do it after November 3rd. And you’ve heard that one before,” he said.

World Bank announces $12bn plan for poor countries to buy Covid vaccines
We and our partners use cookies on this site to improve our service, perform analytics, personalize advertising, measure advertising performance, and remember website preferences.Ok