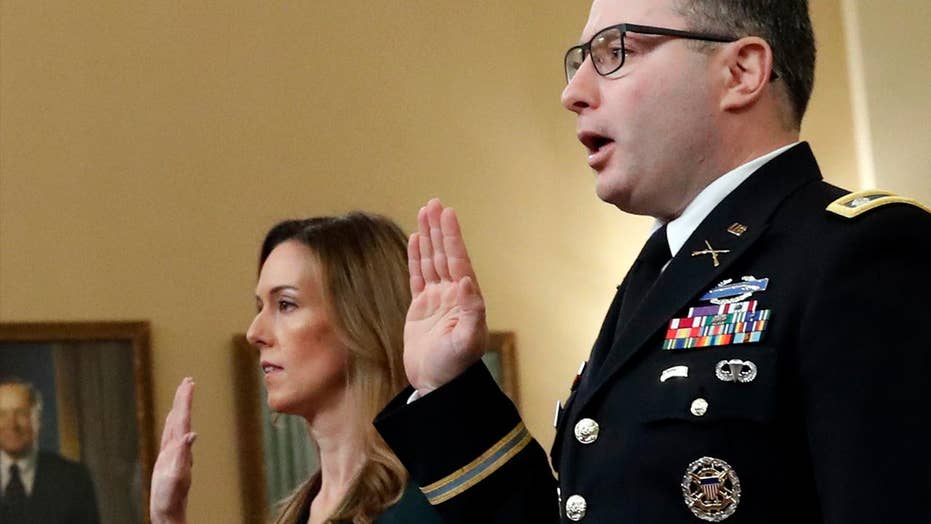 What are the main takeaways from impeachment hearings so far?

Day Three of the House Intelligence Committee impeachment hearings is in the books and by any reasonable account it was a long and bad day for impeachment advocates.

Perhaps the most startling news of the day was that House Speaker Nancy Pelosi, D-Calif., is continuing to block progress on the U.S.-Mexico-Canada Agreement on trade, apparently in exchange for commitments on impeachment.

As we consider key takeaways, keep in mind that last week’s witnesses never spoke to President Trump. They also were not on the July 25 call between Trump and Ukrainian President Volodymyr Zelensky – the call that launched the baseless impeachment inquiry.

By contrast, two of the witnesses Tuesday were listening in on the call. They are National Security Council Ukraine expert Army Lt. Col. Alexander Vindman and State Department Foreign Service Officer Jennifer Williams, who is an adviser to Vice President Mike Pence on Europe and Russia.

The other witnesses testifying Tuesday have firsthand knowledge of the evolving relationship between the U.S. and Ukraine. They are former U.S. Special Representative to Ukraine Kurt Volker and former National Security Council aide Tim Morrison.

Overall, here are the key takeaways from Tuesday’s testimony.

The day of the diplomat

The early testimony has been dominated by diplomats, along with Lt. Col. Vindman.

All of these people told us about their foreign policy views – diplomatic views the Democrats suddenly find inviolate. The Democrats do this despite the fact that they did not press President Barack Obama to give military aid to Ukraine that those same witnesses favored at the time.

Among those views, consider Vindman’s deposition testimony that he and other foreign policy experts in government have “the best, most informed judgment.” He said he was the “most knowledgeable” and said it was not appropriate for other government officials to act to “counter” the views of him and his fellow experts.

Perhaps Vindman’s feeling of self-importance can be placed in context, given that he was offered a senior position in Ukraine as defense minister, which he said he declined and never considered accepting.

These hearings have demonstrated that our ambassadors and other U.S. government officials were involved in the internal politics of Ukraine. Indeed, when he was vice president, Joe Biden engineered the firing of a Ukrainian prosecutor.

Just imagine if a Ukrainian official was able to have former Special Counsel Robert Mueller fired.

Vindman testified that he told Ukrainian officials that they should not get involved in American domestic politics. So why are Democrats suddenly OK with America intervening in Ukraine’s internal politics? Likely for the same reason they said nothing when President Obama worked to defeat Israeli Prime Minister Benjamin Netanyahu in Israeli elections.

Before Tuesday, there had been a fairly one-sided story told about Ukraine. That story was that President Trump was wrong to seek information about the activities of Joe Biden and his son Hunter in Ukraine.

Tuesday was different, however. Rep. Devin Nunes, R-Calif., told a national audience tuning in on TV these important facts:

A) In September 2015 the U.S. ambassador to Ukraine asked for an investigation into the president of Burisma, the Ukrainian natural gas company on whose board Hunter Biden served, reportedly at a salary of about $50,000 per month. Hunter Biden has no expertise on Ukraine or on the natural gas industry.

B) Deputy Assistant Secretary of State George Kent, who testified last week in the impeachment hearings, characterized Hunter Biden’s position on the Burisma board while his father was vice president as a potential conflict of interest (as other witnesses have confirmed).

E) Burisma’s lawyers pressured the U.S. State Department in February 2016, after a law enforcement raid on the home of Burisma’s president, and used Hunter Biden’s name as a reason to intervene.

F) Joe Biden called the president of Ukraine at least three times after the raid on the home of Burisma’s president.

Learning these facts, which are based on documents and interviews, the question is whether the American people will now see that, at the very least, the Bidens should not be above investigation – and that Joe Biden may have acted to serve the best interest of his son when demanding the firing of the Ukrainian prosecutor.

Perhaps the tensest moments of the hearing were when Vindman refused to answer questions about who he spoke to about the Trump-Zelensky phone call.

House Intelligence Committee Chairman Adam Schiff, D-Calif. – who lied about his committee’s contacts with the so-called whistleblower, who kicked off the whole impeachment inquiry – stepped into that discussion to stop any possibility of outing the whistleblower.

Schiff’s motivation for doing that may well be to hide his own wrongdoing.

The Democrats’ bias against President Trump

This entire impeachment inquiry is based on the Democrats’ view that President Trump could only have acted in his own personal interest when asking about information related to the Bidens.

The Democrats refuse to acknowledge that Trump’s actions could have been prompted by a different motivation – that he was requesting information pursuant to a U.S.-Ukrainian treaty that permits heads of state to request information related to investigations – in this case, a U.S. investigation.

On the other hand, despite ample evidence that Joe Biden could have been acting in his own self-interest, the Democrats say the only possible conclusion for Biden’s motivation was innocent. The Democrats claim Bind was acting on the consensus view (which Biden helped build) that the prosecutor had to be fired because he was corrupt.

In other words, the Democrats assert President Trump can only act in his own self-interest and that Joe Biden could only be acting in our national interest.

Also, it may be that the Ukrainian prosecutor fired under pressure from Biden was corrupt. It does not necessarily follow, however, that the prosecutor’s investigation of Burisma was a corrupt act. Indeed, witnesses testifying before Schiff’s committee have made it abundantly clear that Burisma was corrupt.

In advance of each witness, Chairman Schiff gave what amounted to a statement summarizing the evidence as he sees it. The witnesses, however, have not testified consistent with Schiff’s summaries, as the cross-examination by the Republicans has often established.

It was telling that at one point Vindman suggested that his opinion was “informed speculation.” In plain truth, the facts at issue remain rather few and are not as damning as Schiff and the Democrats claim.

It is true that Trump sought investigations related to the Bidens. It is true that the Ukrainians wanted military aid. However, as the policy developed, and more was learned about the new Ukrainian president, the aid was given without restriction and without a quid pro quo, according to Volker, who painted an image of a developing and complicated process.

Further, as Rep. John Ratcliffe, R-Texas, pointed out at the hearing, the two witnesses listening to the Trump-Zelensky phone call had different views on the importance of the call.

Based on all of the above, the Democrats didn’t advance the ball on the third day of the impeachment hearings. Indeed, Volker and Morrison undercut the Democrats.

On the other hand, Tuesday’s hearing harmed Joe Biden’s campaign for the Democratic presidential nomination – and, given the length and lack of revealing information at the hearing, it may have caused Americans’ eyes to roll at the thought of impeachment.