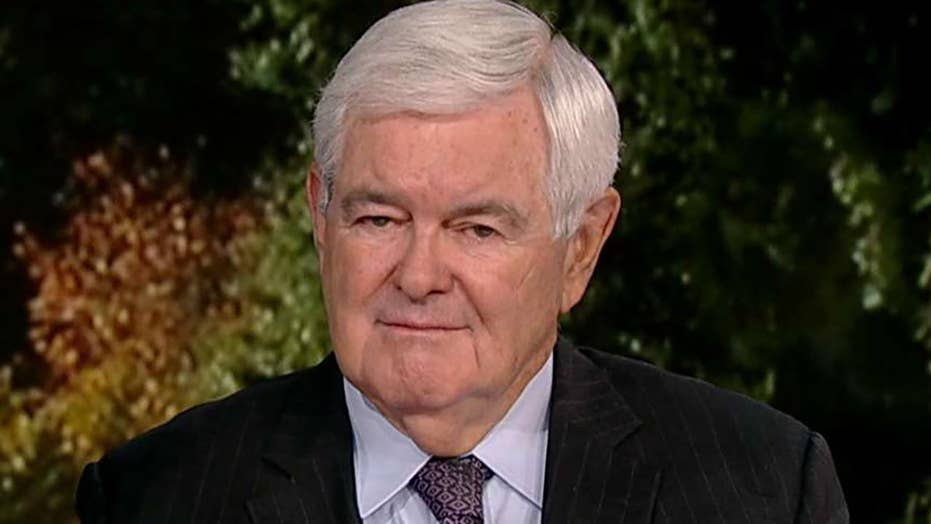 Newt Gingrich: Why do Pelosi and Schiff feel they have to make an impeachment case in secret?

Former House Speaker Newt Gingrich weighs in on why Democrats have chosen to have closed-door impeachment hearings.

The reason for the extended timetable, we read, is that Democrats want to make the “simplest and most devastating case” possible against the president.

What rot. Despite the numerous witnesses that have been questioned, the numerous closed-door interviews and purposeful leaks, it is quite clear that Democrats have discovered little beyond the original phone call between President Trump and President Zelensky of Ukraine with which to make their case.

DAVID BOSSIE: IMPEACHMENT, ADAM SCHIFF, 2020 AND THE CLINTONS – SO MANY QUESTIONS (AND STILL NO ANSWERS)

Even the recent testimony by William Taylor, described as a “top diplomat”, whose testimony CNN described as the “smoking gun” investigators have been seeking, has been tainted by reports https://therightscoop.com/report-adam-schiff-staffer-met-with-whistleblower-witness-on-ukraine-trip-in-august/ that in August Taylor met with an aide to Representative Adam Schiff, who is orchestrating the impeachment hearings in the House. The meeting was apparently arranged by the Atlantic Council, which just coincidentally is in part reportedly funded by Burisma, the Ukrainian company that put Hunter Biden on its board and that lies at the center of this controversy. The plot thickens.

The only reason that the closed-door political assassination effort might go longer than expected is because Democrats think it is working for them. They see polls, like one just announced by CNN, that indicates more Americans wanting the president impeached and removed from office.

CNN’s poll http://cdn.cnn.com/cnn/2019/images/10/21/rel12a.-.trump,.impeachment.pdf  shows that 50 percent of respondents say that President Trump should be impeached and ousted – a record.

Democrats are giddy with the outcome, which would suggest that the Adam Schiff-led investigation is winning over the public. That would be disheartening for the president and for Republicans, who have been arguing that the clandestine House proceedings are politically motivated and illegitimate.

The good news for Trump supporters is that the poll does not suggest anything like a public lovefest with the impeachment inquiry.

Here’s what CNN did not tell you about their poll:

President Trump is not alone in having upside-down approval ratings. Democrats also have net negatives, according to the CNN poll, with 48 percent of all respondents having an unfavorable opinion of the party and only 45 percent having a positive one. That’s worse than at the end of last year, thanks to a five-point surge in negative readings.

Could it be that when voters gave the House back to Nancy Pelosi’s team last year they expected to have more to show for it than endless behind-door interviews and mostly empty accusations against President Trump?

It may be, for instance, that voters consider passing the USMCA important to the nation’s wellbeing and want Speaker Pelosi to allow a vote on the floor. Democrats have expressed great concern about the pain inflicted on farmers by President Trump’s trade battle with China. The USMCA contains some real wins for American farmers. If they are sincerely concerned about the farm belt, why don’t they get moving on the NAFTA re-do?

We know the answer. The USMCA would especially benefit dairy farmers, like those in Wisconsin. Why would Democrats want to give Trump a win in that critical state? As with the impeachment process, it’s all about politics.

Public Mint Launches, Announces 200 Banks Are On Board

Explosive Book Written By Trump’s Niece Can Be Published After All, Judge Rules
We and our partners use cookies on this site to improve our service, perform analytics, personalize advertising, measure advertising performance, and remember website preferences.Ok