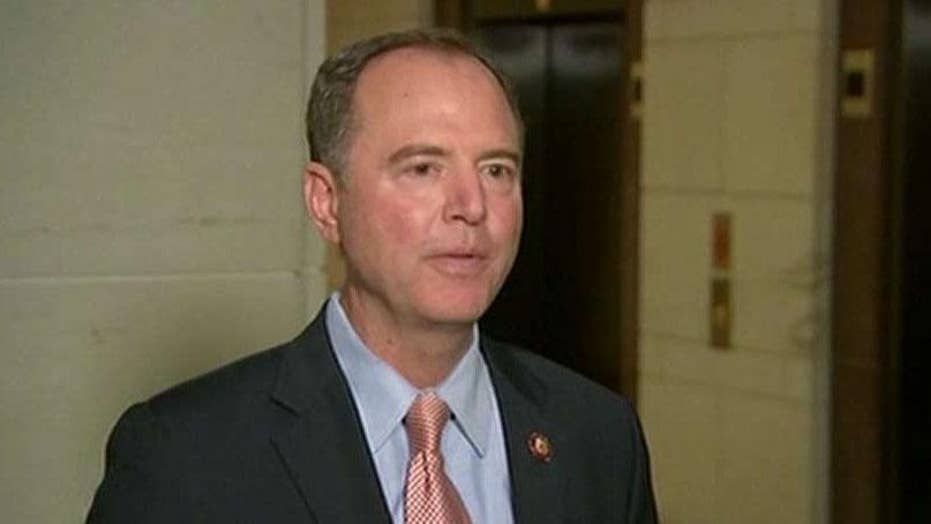 A prank call by Russian deejays fished in Rep. Adam Schiff, D-Calif., but a Republican challenging him for his House seat doesn't think the call, in which Schiff expressed eagerness to get "compromising material" on President Trump, is a laughing matter.

Jon Hollis, who is running for the Los Angeles-area seat held by Schiff since 2001, has filed an ethics complaint against his opponent based on the 2017 call, in which a phony Ukrainian politician claimed to have graphic photos of the then newly-inaugurated President Trump.

“This letter serves as an official complaint to the Office of Congressional Ethics (OCE) regarding Rep. Adam Schiff’s illegal collusion with foreign entities and misuse of taxpayer resources for opposition research on political enemies,” one complaint, dated Aug. 28 and filed by Jon Hollis, a Republican challenger for the seat in California’s 28th Congressional District, stated. “The evidence supporting Adam’s Schiff's violations of the law is compelling and irrefutable.”

The filing primarily points to that wincing 2017 call that continues to haunt.

At the time, Schiff assumed he was talking with Ukrainian politician Andriy Parubiy, who solicited potentially damaging information and compromising pictures of Trump from his visit to Russia for the Miss Universe pageant four years earlier.

Schiff stressed in the call that he would “be in touch with the FBI” to make arrangements with regard to accessing the supposedly explicit materials and cautioned the voice on the other end not to divulge anything he would not want “our Russian friends” to hear, warning that they were likely listening.

However, in reality, the then-ranking member of the House Intelligence Committee was conversing with someone far from the political powers of Kiev. Instead, he was being pranked by two Russian comedians — Vladimir Kuznetsov and Alexey Stolyarov. Schiff became chairman of the committee this year.

“It is clear from the recorded phone call that Rep. Schiff knows he should not be trying to obtain opposition research on a political opponent from foreign nationals. He attempts to mask his wrongdoing by, on numerous occasions, mentioning that he will work with the FBI,” Hollis asserted in the letter. “In so doing, Rep. Schiff is attempting to involve the FBI in his corrupt attempt to obtain dirt on President Trump. The FBI should not be in the business of teaming up with politicians to use the power of government to dig up dirt on political opponents.” 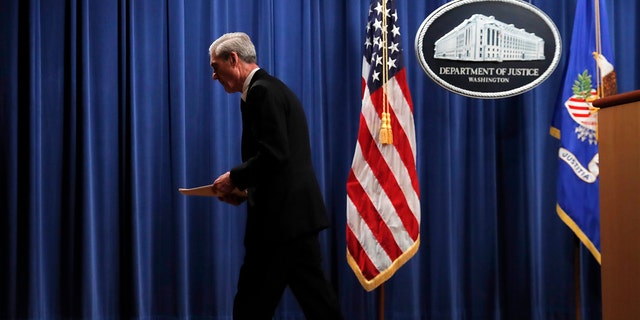 Special Counsel Robert Mueller walks from the podium after speaking at the Department of Justice on May 29, 2019, in Washington, about the Russia investigation. (AP Photo/Carolyn Kaster)

Last week, the conservative nonprofit Tea Party Patriots Action group also filed an ethics complaint with regard to the controversial “Ukrainian” call, “requesting an inquiry into multiple violations of House ethics rules by Schiff,” also alleging that he had “used and abused his position” in the endeavor to “seek damaging and negative information about President Trump.”

A representative for Schiff did not immediately respond to a request for comment, but a spokesperson for the congressman previously told the Atlantic that the committee “informed appropriate law-enforcement and security personnel of the conversation, and (the) belief it was probably bogus.”

Hollis is alleging Schiff's role in the call was a blatant “abuse of power” and remains a hallmark talking point as he attempts to unseat the long-standing democratic figure in the 2020 election. Throughout much of Trump’s first term in office, Schiff – who has served in Congress as a member of the Democratic Party since 2001 – was a primary pursuant of the Robert Mueller-led probe into whether the Trump campaign “colluded” with Russia to secure 2016 election victory.

“Watching Schiff push a false narrative over and over again with Russia and now with the whistleblower complaint tells us the only thing he cares about it fake investigations,” Hollis told Fox News. “Meanwhile, we have 60,000 homeless people in Los Angeles County, and his district is falling apart.” 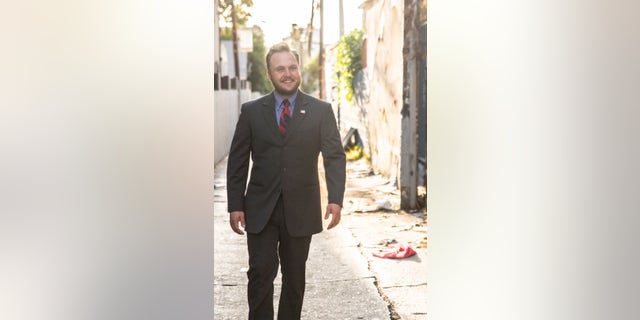 Hollis, a 29-year-old political rookie who grew up in the central Californian city of Fresno, is also pledging to fix his ailing homestead, which he accuses Schiff of neglecting.

“The district historically has a 40 percent turnout, so we need to get the young people to vote. For me, the rampant homelessness is the No. 1 issue followed by mental health reform,” Hollis continued. “Mental Health is the root cause of many issues we are facing today. And our infrastructure is falling apart – our roads, schools, energy and water systems.”

And yet, he emphasized, Californians are paying one of the highest tax rates in the nation, with 32 new taxes slapped on residents in 2019 alone.

Hollis, who has spent a decade working in the film industry as an assistant director and now a location scout for major studios, is one of five challengers so far striving to defeat Schiff from the 28th district, which spans pockets of central Los Angeles and West Hollywood to the eastern fringes of Burbank and Glendale. He is one of a multitude of conservative critics accusing Schiff of “wasting millions of dollars and countless hours pushing lies” in a “witch hunt” against the President.

“Mr. Schiff is out there with his dog and pony show,” Hollis added. “But if our district isn’t helped, we won’t get back from the brink.”