A cabinet minister has insisted the UK is making “significant progress” in boosting coronavirus testing despite hundreds of thousands of NHS staff still not being screened.

Questions have been raised about the country’s current level of testing, following comparisons with nations such as Germany, which is estimated to now be conducting as many as 500,000 tests per week.

Robert Jenrick, the housing, communities and local government secretary, said the UK is now able to test 12,750 people for COVID-19 every day.

He said 8,240 people were tested for coronavirus on Monday, with more than 900 NHS staff tested over the weekend. 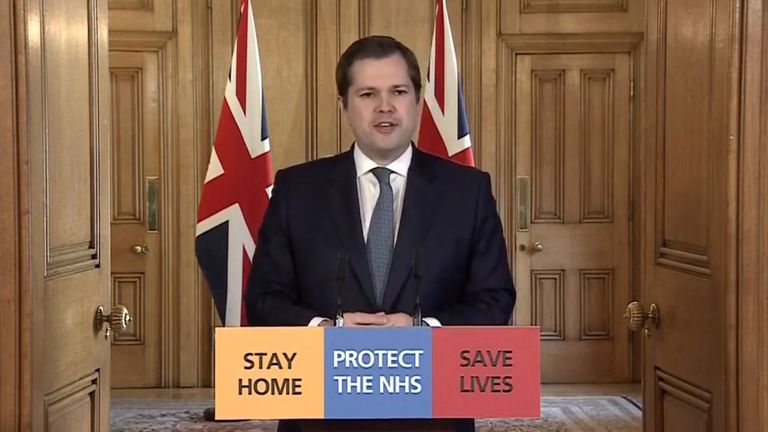 Speaking to Sky News’ Kay Burley @ Breakfast show, the cabinet minister said the UK had initially been focusing its testing capacity on those in critical care.

“That was the best way to save people’s lives so hospital staff could understand what the condition was of those people who were in critical care, and know how to treat them appropriately,” he said.

The government has previously highlighted a shortage of substances known as reagents for hindering the UK’s ability to increase its testing capacity.

However, the Chemical Industries Association has suggested supply of reagents could be boosted when it receives clarity on the level needed in the UK.

It said in a statement: “While there is of course an escalating demand, there are reagents being manufactured and delivered to the NHS.

“Every business here in the UK and globally is looking at what they can do to help meet the demand as a matter of urgency.

“To clarify the exact NHS need and meet it, all relevant UK industries are continuing to work closely with government.”

But Mr Jenrick said “not all” the ingredients needed to make an efficient coronavirus test are available in the UK.

“We need to bring together the right group of chemicals and other materials to produce the tests,” he added.

“We are trying to do that, the industry is doing a fantastic job but this is a huge effort.

“But, I think as we can all understand, there’s extremely high demand internationally.

“All other developed countries want to be procuring these tests at this moment, because testing is essential to providing an exit strategy from the virus.”

Mr Jenrick said the UK would “obviously learn lessons” later on about which countries pursued the right strategies to deal with COVID-19.

But he stressed the government was focused on getting “as many of the tests brought forward as we possibly can”.

“Although I appreciate it’s from a base that is lower than any of us would wish, we are now making significant progress,” he added.

He also said, by next week, there should be “thousands more” ventilators available to the NHS, including for new make-shift facilities such as the Nightingale Hospital at London’s ExCel Centre.

This follows a call for British manufacturers to switch their factories to producing ventilators to deal with the COVID-19 pandemic.

The UK currently has more than 12,000 ventilators but a “significant increase” was still needed, Mr Jenrick said.

It follows concerns expressed by one of US President Donald Trump’s team about the UK’s supply of ventilators, which have proved crucial in treating severe cases.