Climate Change, Wildfires And COVID-19 Are Creating A Hellish Combo For California Prisons

More than 500 wildfires have been ignited across California this week, the result of a record-shattering heat wave and about 12,000 lightning strikes. The governor has declared a statewide emergency, and tens of thousands of people are under evacuation orders, yet many of them are reluctant to head to shelters amid the coronavirus pandemic.

The thousands of people incarcerated in California prisons — some of which have already been devastated by COVID-19 — do not have the option of fleeing the flames. Instead, they are forced to wait out the crisis behind bars, breathing in smoke and polluted air that could make them even more vulnerable to dying of the coronavirus. Some of the prisoners are fighting the flames themselves, earning just a few dollars a day for the life-threatening work. And because of the coronavirus’s toll on the state’s prisons, the firefighting crews dispatched from the prisons this year are stretched thin.

It is a convergence of crises on a level the state has never seen.

“What does it say about a civilized society, that they leave people to die of COVID in prisons — and then regret that decision that they left them to die in prisons because now it’s fire season and we need them to die for us on the fire line,” Kate Chatfield, a senior adviser at the Justice Collaborative said in an interview. “It’s really quite barbaric. And this was entirely foreseeable. We have fire season every year.”

Incarcerated firefighter crews are the “backbone” of the state’s wildland firefighting operations, a high-ranking firefighter told HuffPost in 2018. Those who are accepted onto crews earn $2 to $5 a day, and they get an extra dollar an hour when actively fighting a fire. They receive time off their sentence in exchange for the high-risk, low-wage work. But because of the state’s restrictions on individuals with felony convictions, many people who serve as firefighters while incarcerated are unable to get a job with a fire department after they are released.

The exploitative system saves the state of California nearly $100 million a year. Prison labor is so intrinsic to California’s firefighting efforts that officials — including those in the attorney general’s office under Kamala Harris’s leadership — have fought criminal justice reform measures aimed at combating overcrowding because it would cost the state access to incarcerated firefighters. (Sen. Harris, now the Democratic vice presidential candidate, has said she was unaware of her office’s efforts and eventually ordered it to stop.)

Now, as the pandemic forces California to depopulate its prisons, the state is grappling with its reliance on prison fire crews. Last month, after more than 2,000 California prisoners tested positive for COVID-19, Gov. Gavin Newsom (D) ordered the expedited release of up to 8,000 people nearing the end of their sentences, a long-overdue effort to create more distancing space in the prisons. Some of the people approved for expedited release were incarcerated firefighters. As a result, there are 236 fewer incarcerated firefighters right now than there were in August 2019.

The conditions in California have overwhelmed the state’s Department of Forestry and Fire Protection, better known as Cal Fire. With so many blazes, firefighters are overextended and equipment is sparse. “California’s firefighting resources are depleted as new fires continue to ignite,” Cal Fire public information officer Jeremy Rahn told HuffPost earlier this week.

The state has used $72 million in emergency supplemental funds to backfill more than 800 seasonal firefighter jobs, in part to offset the loss of incarcerated firefighters, Newsom said at a Friday news conference. 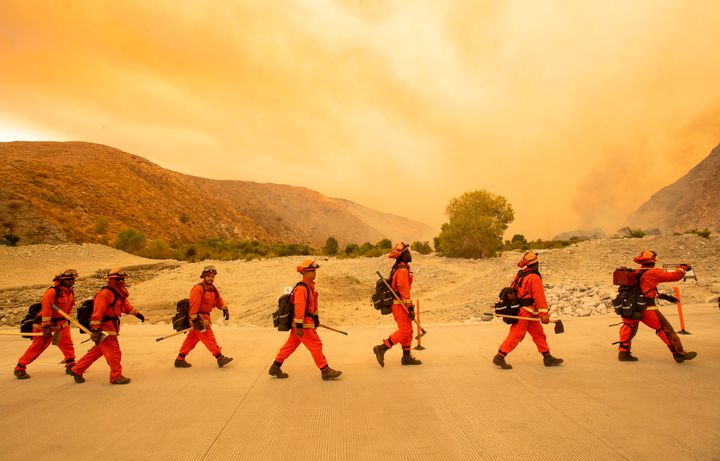 In less than a week, the wildfires have charred more than 771,000 acres (roughly the size of Rhode Island), killed five people and forced tens of thousands of  Northern California residents to evacuate. But people who are incarcerated do not have the ability to choose when to escape approaching flames. Two California prisons — Solano State Prison and California Medical Center — are near residential areas that have been evacuated, but prison officials have resisted relocating the people in custody. Asked repeatedly to describe their evacuation plan, a spokesperson for the California Department of Corrections and Rehabilitation declined to provide one.

“We are actively monitoring the Lightning Fire in Vacaville, but are not being directed to evacuate and the institutions are not in immediate danger,” Aaron Francis, a spokesperson for the state’s corrections department, wrote in an email. “For safety and security reasons, we are not releasing evacuation plans to the public.”

Rasheed Lockheart, who served as an incarcerated firefighter at San Quentin before he was paroled earlier this year, said the only evacuation plans and disaster drills he ever saw at the prison were for staff, not prisoners. Lockheart helped facilitate disaster drills every month from 2017 to January 2020. “Every one of them was for the staff. We never once did any for the inmates. And I’ve never even heard of there being a plan for the inmates,” Lockheart said. The plan, he added, “is for staff to save themselves — and then us, if possible.”

Lockheart remembers doing earthquake safety drills when he was incarcerated in a juvenile detention facility shortly after the 1994 Northridge earthquake. “All these kids were telling me, ‘This is bullshit because when the earthquake happened, all the staff took off and all you could hear was boys in their cells crying and yelling,’” he recalled.

In a March episode of “Uncuffed,” a podcast made by incarcerated people in California that airs on KALW public radio in San Francisco, several people imprisoned at Solano recalled the last time a wildfire threatened the prison, in 2018. As the fire crept down a hill behind the property and their cells filled with smoke, prison staff fled, they said.

“The power went out and all the air in the building was gone, and then the building started to fill up with smoke,” Bryan Mazza, who is incarcerated at Solano, said in March. “They left us in there, locked inside that building like that.”

Even people in prisons that aren’t in immediate risk of catching fire are struggling with the poor air quality caused by the flames. Prisons have notoriously poor ventilation, a problem that may have exacerbated the spread of the coronavirus. It also means that people imprisoned near the fires are likely breathing in fine particulate pollution, which can cause short- and long-term health problems, including respiratory diseases. Exposure to wildfire smoke may also increase an individual’s vulnerability to COVID-19. San Quentin State Prison, located near Bay Area fires, is currently the biggest COVID-19 cluster in the country.

Adnan Khan, the executive director of Re:Store Justice, who was formerly incarcerated at Solano State Prison and San Quentin, was told by a friend who is still in Solano that correctional officers are walking into the building with ash on their shoulders and their hats. “Whatever the air quality was outside, whatever the temperature was outside, that’s what the ventilation system would blow in the cell,” Khan said, recalling his time at Solano.

Staff and incarcerated individuals near the fires have been provided with N95 masks, according to Francis, the CDCR spokesman, although it is not clear how many N95s, which are designed for single use, are available for each person. Khan was told by his friend in Solano that N95s had not been available to every person in his dorm.

Until recently, the California Medical Center, a prison for those who are terminally ill or medically vulnerable, was using outdoor tent structures to create more space for social distancing and prevent the spread of COVID-19. Because of the dangerous air quality and encroaching flames, people housed in those tents have been moved back inside the prison — a move that potentially decreases their risk of being harmed by the fires but could increase their risk of contracting the coronavirus.

Fires have become a near year-round ordeal in the Golden State, with devastating effects on communities, forest ecosystems and the firefighters who respond. Multiple factors are driving California’s wildfire crisis. Decades of fire suppression have left forests overgrown. A growing number of people living in wildland areas often means more homes are destroyed in a blaze. And, of course, global climate change is driving up temperatures, fueling drought and triggering larger and more extreme fires.

Anthropogenic climate change has doubled the amount of land that’s burned in Western forests since the 1980s, a 2016 study found. And without drastic cuts in greenhouse gas emissions, the amount of land scorched annually in California is expected to increase 77% by 2100, according to a 2018 state climate assessment.

The Trump administration has responded to California’s wildfire crisis not with thoughtful leadership or the empathy it has shown for Republican-led states reeling from disasters, but with threats and partisan politics. It has repeatedly dismissed and downplayed the role of climate change. “This has nothing to do with climate change,” Trump’s first interior secretary, Ryan Zinke, told a Sacramento TV station during a visit to the fire-scorched state in 2018. Trump has blamed fires on everything from a lack of raking to a nonexistent water shortage resulting from “bad environmental laws.” In late 2018, Trump signed an executive order to boost logging on millions of federal acres to combat extreme fires.

In a Thursday address at the Democratic National Convention, Newsom slammed Trump for threatening — yet again — to withhold federal wildfire relief funds over perceived forest mismanagement by the state. At a campaign rally in Pennsylvania earlier that day, Trump insisted California has “gotta clean your floors, you gotta clean your forests” of “leaves and broken trees,” adding that “maybe we’re just going to have to make them pay for it because they don’t listen to us.” Many of the state’s worst fires have been on land managed by the federal government, not the state.

“The hots are getting hotter. The dries are getting drier,” Newsom said in his DNC address. “If you are in denial about climate change, come to California.”

On Sunday, the temperature in Death Valley, California, soared to a disturbing 130 degrees Fahrenheit ― potentially the hottest temperature ever recorded on Earth.