(Reuters) – U.S. Representative Duncan Hunter, a leading California conservative, said on Monday he would plead guilty to a federal charge of misusing campaign funds in a corruption case that could help Democrats seize his traditionally Republican seat. 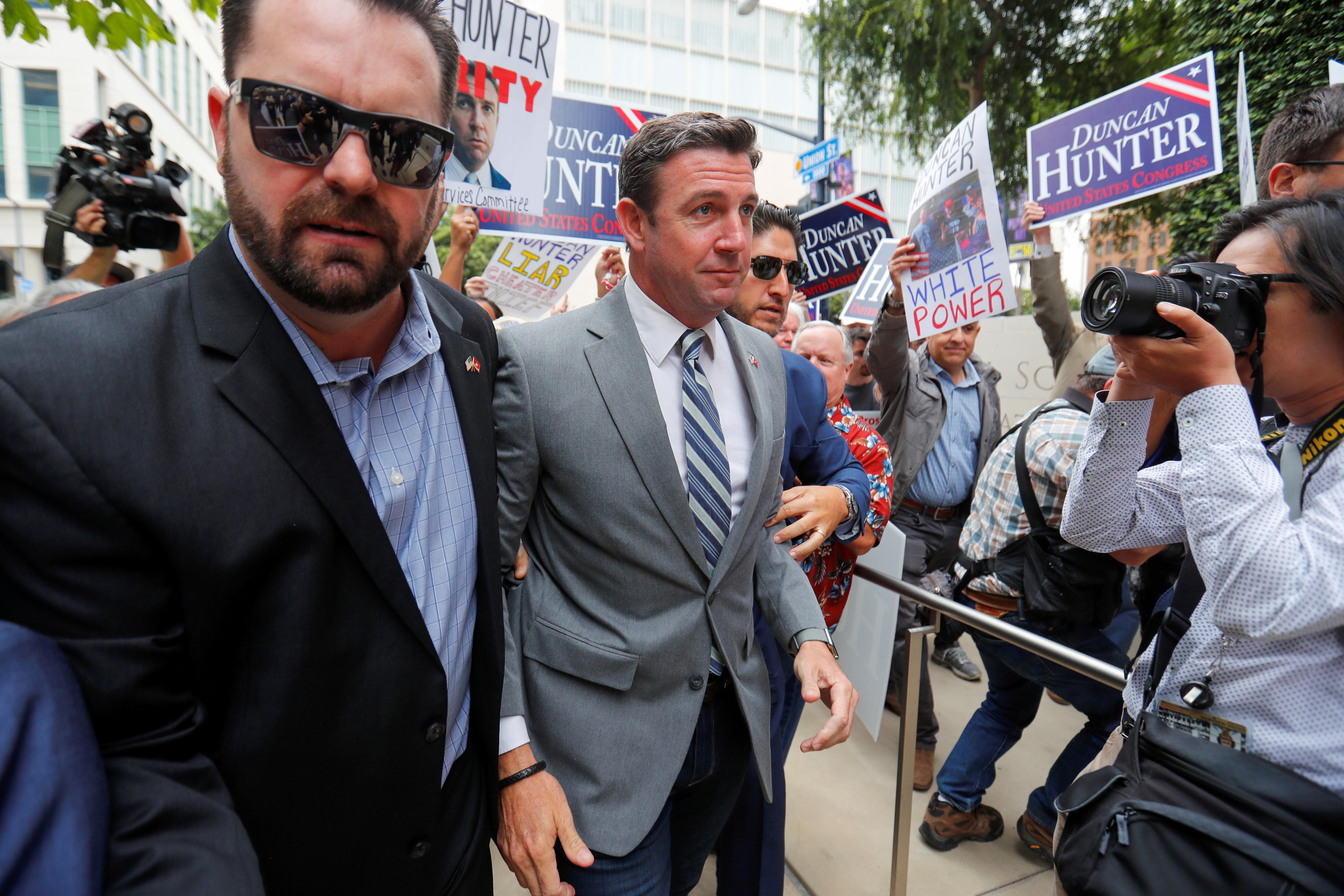 Hunter, 42, a U.S. Marine Corps combat veteran and early supporter of President Donald Trump, had insisted he was the victim of a politically motivated prosecution. He announced his plans to enter a guilty plea on Tuesday during a brief interview aired on a local television station.

Hunter also indicated, without saying so explicitly, that he would not seek re-election next year to the San Diego congressional seat he first won in 2008, succeeding his father and fellow Republican, Duncan Lee Hunter.

“I’m confident that the transition will be a good one. My office will remain open, I’ve got a great staff,” he said. “We’re going to pass it off to whoever takes the seat next year.”

Hunter and his wife, Margaret, were indicted in 2018 on charges of misappropriating $250,000 in campaign donations to pay for personal expenses, including their children’s private school tuition, lavish travel, expensive meals at restaurants, groceries and clothing.

Margaret Hunter pleaded guilty in June to conspiring to misuse campaign funds, and agreed to cooperate with prosecutors in the case.

Duncan Hunter’s TV appearance on Monday coincided with the posting of a notice for him to appear for a change-of-plea hearing, set for 10 a.m. PST on Tuesday in U.S. District Court in San Diego. It was filed in the case docket without any further documentation specifying details of the prospective plea agreement.

But Hunter told KUSI-TV he had agreed to plead guilty to a single count of “misuse of my own campaign funds” in a deal he said he accepted to avoid subjecting his family to the spectacle of a trial that was set to open on Jan. 22.

“It’s important not to have a public trial for three reasons, and those three reasons are my kids,” he said on camera, dressed in a suit and tie.

The case is seen as giving a boost to Democrats’ bid to seize control of the traditionally Republican seat in California’s 50th Congressional District. His 2018 Democratic challenger, Ammar Campa-Najjar, a former Obama administration aide of Mexican and Palestinian heritage, lost his bid to unseat Hunter in last year’s race despite the incumbent’s indictment.

But the dynamics of a guilty plea would presumably play more to Democrats’ favor in 2020. The party already holds a big majority of the 53 U.S. House of Representatives seats in California.

Hunter appeared to have blamed his wife for misuse of campaign funds in a Fox News interview last year, saying he had given his spouse power of attorney while he was deployed to Iraq in 2003, and that she oversaw his campaign finances.

On Monday, Hunter acknowledged: “I did make mistakes,” though he sought to draw a distinction between campaign funds and taxpayer dollars.

“Not a single dime in taxpayer money is involved in this,” he said. “I did not properly monitor or account for my own campaign money. I justify that plea with the understanding that I am responsible for my campaign, what happens to my campaign money.”

Hunter said that if he were sentenced to prison, he was prepared to “take that hit,” adding: “My only hope is that the judge does not sentence my wife to jail. I think my kids need a mom at home.”

The six-term congressman also said he was most proud of his support for members of the U.S. armed forces that he believed were wrongly prosecuted for alleged battlefield misconduct. Among those were Navy SEAL Edward Gallagher, who was convicted by court-martial of illegally posing for photos with a dead Iraqi detainee before Trump granted him clemency.

Hunter served in Iraq and Afghanistan before becoming the first combat veteran of either conflict to serve in Congress.

U.S. Construction Spending Jumps Much More Than Expected In August

Facebook cofounder Dustin Moskovitz just scored his second billion dollar-plus exit with Asana's successful listing. Here's how much his stake — and those of other insiders — are now worth
We and our partners use cookies on this site to improve our service, perform analytics, personalize advertising, measure advertising performance, and remember website preferences.Ok