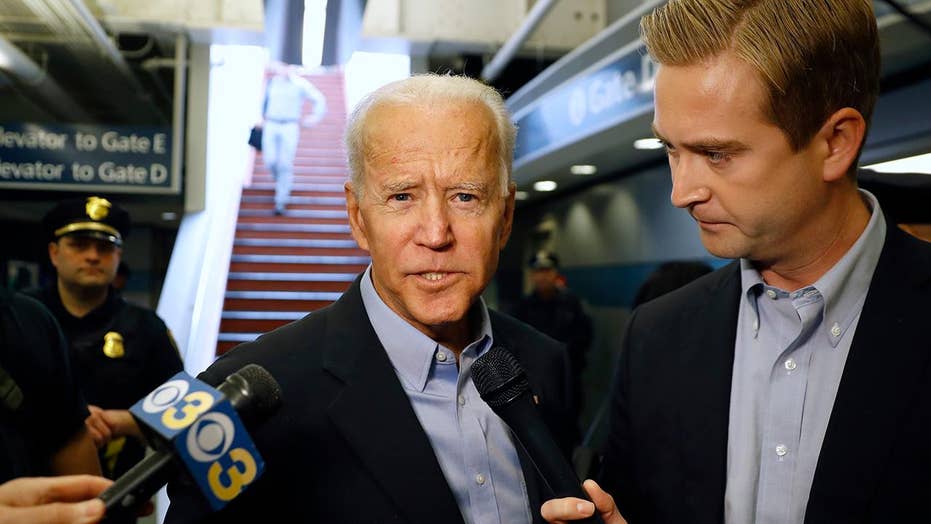 Joe Biden: I asked President Obama not to endorse

Speaking to reporters in Wilmington, Delaware, 2020 presidential candidate Joe Biden says whoever wins the Democratic nomination should win it ‘on their own merits.’

The reaction came fast and furious.

“Joe Biden stands in near complete opposition to where the center of energy is in the Democratic Party today,” the Justice Democrats wrote on their Twitter feed.

Taking aim at Biden — who’s perceived to be more moderate than many of the current contenders for the Democratic presidential nomination, including progressive favorites Sens. Bernie Sanders of Vermont and Elizabeth Warren of Massachusetts – the group argued that “we can't let a so-called 'centrist' like Joe Biden divide the Democratic Party and turn it into the party of 'No, we can’t.'”

Justice Democrats — who also called Biden “out-of-touch” –  is an increasingly influential group among the left of the party. They’ve championed progressive rock-star Rep. Alexandria Ocasio-Cortez of New York as well as Sanders. The group was founded by members of Sanders 2016 presidential campaign.

While Sanders himself didn’t torch Biden as he jumped into the race, it’s clear that many of his progressive supporters view the former vice president as a threat.

Biden’s entry into the race – at least in the early going – sets up a battle between himself and Sanders, who thanks to his fierce fight with eventual nominee Hillary Clinton for the 2016 Democratic nomination, enjoys name ID on the level of the former vice president.

But it's not just Sanders supporters who are targeting Biden.

The head of the Progressive Change Campaign Committee – which has backed Warren — also took aim at Biden, who enters the race as the front runner in most national polls and early primary and caucus voting state surveys, slightly atop of Sanders and well ahead of the rest of the large field of 20 contenders.

"With billionaires deciding not to run, progressive candidates have been in need of a foil. If Joe Biden positions himself as the political insider from yesteryear who says big ideas like universal child care, student debt relief, and a wealth tax on ultra-millionaires are not possible, he would be an easy foil, Adam Green, the co-founder of PCCC, told Fox News.

These kind of jabs from progressive groups could be the appetizer for a building clash between the progressive and establishment sings of the party.

Biden has pushed back against the perception that he's a moderate in a party that's increasingly moving to the left. Earlier this month he described himself as an “Obama-Biden Democrat.”

And Biden said he'd stack his record against "anybody who has run or who is running now or who will run."

Highlighting his early public push for same-sex marriage, he said, "I'm not sure when everybody else came out and said they're for gay marriage."

Former Democratic National Committee chair Donna Brazile – a Fox News contributor – highlighted that “Joe Biden can occupy his own lane in large part because he’s earned it. He’s earned the right to call himself whatever.”

But she emphasized that “elections are not about the past, they’re about the future…I do believe he has the right ingredients. The question is can he find enough people to help him stir the pot.”

And she spotlighted that Biden’s “challenge is going to be to convince a new generation of Democrats that he can represent their views as well.”

A leading Republican strategist suggested that Sanders could have the upper hand over Biden.

“I predict a slow and steady drop in the polls for Joe Biden. A politician who has been in the public eye since before Watergate is going to find a far different Democratic Party than even the one he remembers from even the Obama-Biden years,” argued Colin Reed, a veteran of presidential and senate campaigns who later served as executive director of the pro-Republican opposition research shop America Rising.

Reed claimed that age is a bigger factor for the 76-year old Biden that for Sanders, who’s a year older.

“Bernie Sanders is pushing 80 years old, but his socialist policy prescriptions are the present and future as far as liberal primary voters are concerned,” Reed spotlighted. “All the Beltway chatter about Biden's perceived strength in a general election means nothing if he can't get through the raucous primary contest before him.”

With slightly more than nine months to go until the first votes are cast in Iowa and New Hampshire, it's far from a sure thing that Biden and Sanders will remain standing atop the rest of the pack.

“While Bernie and Biden have some advantages, there is a lot of time for other candidates to break through. In other words, we will see if the two front-runners have peaked too early,” noted Wayne Lesperance, vice president of academic affairs at New England College.

And University of New Hampshire political science professor Dante Scala said he’s “not convinced that those two combined, take all the oxygen out of the room and then it becomes a two person race.”

And he questioned Biden’s staying power more than that of Sanders, saying “I’m still curious whether Biden’s appeal to moderate Democrats is going to be as enduring as Sanders is so far among progressives.”