Alexandria Ocasio-Cortez to Back First 2020 Challenger to Sitting Democrat

WASHINGTON — Representative Alexandria Ocasio-Cortez plans on Tuesday to announce her endorsement of Marie Newman, a progressive candidate seeking to oust Representative Daniel Lipinski, a conservative-leaning Illinois Democrat, marking her first move of the 2020 campaign cycle to back a primary challenger to an incumbent.

Ms. Ocasio-Cortez’s high-profile support amounts to a powerful seal of approval, telegraphed to her legions of ardent liberal fans, on behalf of Ms. Newman, and a reflection of the zeal of the party’s progressive left to leverage its nascent power to continue targeting sitting Democrats.

Ms. Newman is backed by Justice Democrats, the group that propelled Ms. Ocasio-Cortez’s insurgent campaign and upset victory last year over a veteran Democratic congressman who she argued was out of step with his constituents. A businesswoman who has described herself as “a real Democrat,” Ms. Newman also ran in 2018 against Mr. Lipinski and lost by about 2,000 votes.

“Marie Newman is a textbook example of one of the ways that we could be better as a party — to come from a deep blue seat and to be championing all the issues we need to be championing,” Ms. Ocasio-Cortez said in an interview.

Of Mr. Lipinski, she said: “The fact that a deep blue seat is advocating for many parts of the Republican agenda is extremely problematic. We’re not talking about a swing state that is being forced to take tough votes.”

Mr. Lipinski, 53, bills himself in his campaign ads as “a workhorse, not a show horse,” and the eight-term congressman, who opposes abortion rights and voted against the Affordable Care Act, has repeatedly expressed his concerns that it is “detrimental” for the party to push out conservative lawmakers. He succeeded his father, William O. Lipinski, who held the seat for more than two decades before the younger Mr. Lipinski was elected in 2004.

Ms. Newman, 55, a supporter of abortion rights who founded a consulting business, argues that the incumbent congressman is far more conservative than the district, a swath that includes the southwestern suburbs of Chicago.

“This campaign is about putting someone in place that is in alignment directly with the district on issues like affordability for the middle class and working families, the Green New Deal,” Ms. Newman said in an interview on Monday, adding that she and Ms. Ocasio-Cortez “share some very similar values.” 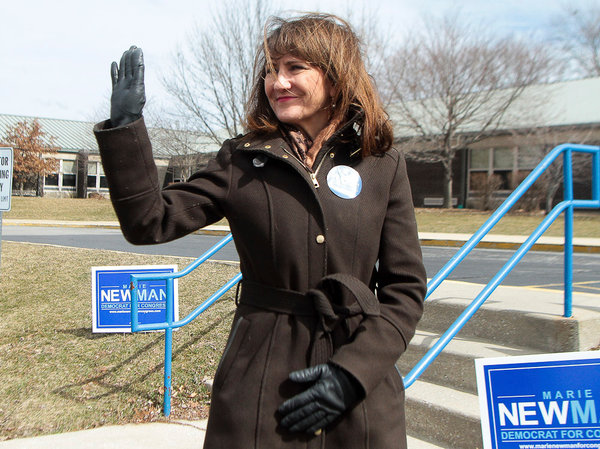 But the move also reflects a careful political calculus by Ms. Ocasio-Cortez, a Bronx Democrat. She came to Congress vowing to take down any Democrat she considered insufficiently progressive, but has, until now, refrained from taking on any of her fellow incumbents directly. In challenging Mr. Lipinski, she is targeting an incumbent Democrat, but one who has broken sharply with party orthodoxy, and has already lost the support of some of his other Democratic colleagues.

The House Democrats’ campaign arm in April formally broke committee business ties with political consultants and pollsters who sign on to work for primary challengers, infuriating progressive Democrats. The blacklist, Ms. Newman said, “was a very expensive issue for a while on my campaign.”

Progressive groups and lawmakers, however, have still flocked to support Ms. Newman. Representative Ro Khanna of California, and two Illinois lawmakers, Representative Jan Schakowsky and then-Representative Luis V. Gutiérrez, broke with party leadership in 2018 to endorse Ms. Newman, and Mr. Khanna renewed his endorsement this year. Representative Cheri Bustos of Illinois, the chairwoman of House Democrats’ campaign arm, canceled a fund-raiser in support of Mr. Lipinski in May after facing a backlash from the left.

Ms. Cisneros, who was recruited to run against Mr. Cuellar by Justice Democrats and is described by some as the next Ms. Ocasio-Cortez, has yet to win the endorsement of any sitting House Democrat.

“We are so proud that Marie Newman is the first Justice Democrat of this cycle to receive an endorsement from Congresswoman Alexandria Ocasio-Cortez,” said Alexandra Rojas, the executive director of Justice Democrats. “The momentum is growing in our movement to make the Democratic Party fight for solutions as big as the problems we face and create a party that fights for its voters, not corporate donors.”

Until this week, Ms. Ocasio-Cortez had largely focused on helping incumbent freshmen lawmakers, like Representative Joe Neguse of Colorado, a well-liked freshman and member of Democratic leadership whom she will support at a fund-raiser in Boulder this week. In April, she rallied around some of her colleagues who flipped districts President Trump won in 2016, encouraging her Twitter followers to donate to their campaigns.

Ms. Ocasio-Cortez said that she would continue to assess whether she would weigh in on other primary challenges, but that she had no interest in intervening in competitive races that could tip the balance of power in the House.

“If we’re going to make these changes, they need to come from safe blue seats,” she said.