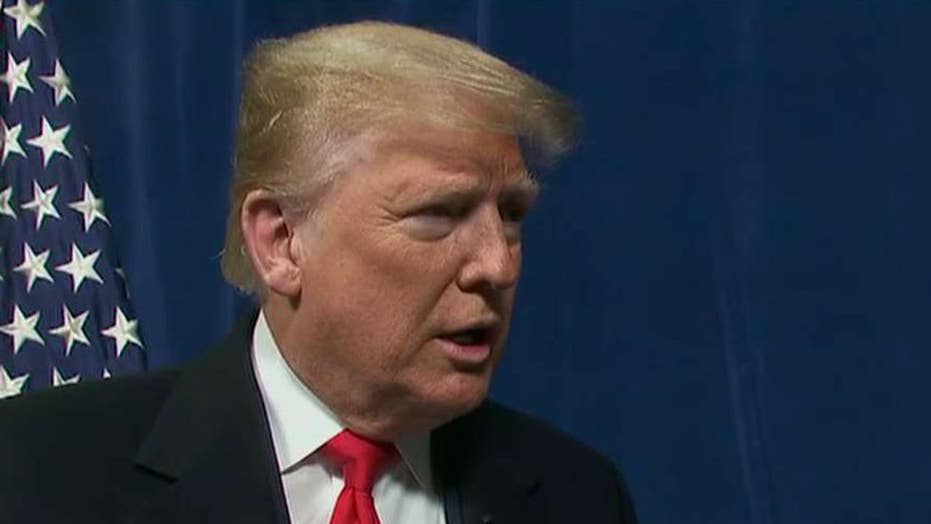 President Trump told Fox News' "The Ingraham Angle" in an exclusive interview Friday that his defense team in the Senate impeachment trial merely has to "be honest" in laying out the case for why he shouldn't be removed from office before calling the proceedings a "fraud."

"What my people have to do is just be honest, just tell the truth," Trump told Raymond Arroyo at the March for Life rally in Washington. "They’ve been testifying, the Democrats, they’ve been telling so many lies, so many fabrications, so much exaggeration. And this is not impeachable."

The president’s team of lawyers, led by White House Counsel Pat Cipollone, have vowed to lay out an aggressive case in defense of the president when they begin their opening arguments Saturday morning. Democrats say Trump wrongfully sought to withhold military aid from Ukraine until the country's president announced an investigation into dealings involving natural gas company Burisma Holdings, where former Vice President Joe Biden's son, Hunter sat on the board.

Trump has repeatedly denied any wrongdoing in the matter.

"Can you imagine being impeached and you didn’t commit a crime?"

Trump also disagreed with the claim by some Democrats that Hunter Biden had nothing to do with the president's impeachment.

"When you look at the Bidens and the Biden family, when somebody with actually, not a job, who just was taken out of the Navy — I mean, thrown out of the Navy, had nothing, all of a sudden the father becomes vice president … the son is making millions and millions of dollars," Trump said. "It’s corruption."

Arroyo also asked Trump about the claim by Democrats that the president wasn't interested in corruption in Ukraine until Biden began climbing up the Democratic presidential polls.

"Well it looks to me like he might not even make it, and he was one of how many, 25 or 26 people? And it’s so ridiculous to think that," Trump said, before defending his July 25 phone call with Ukraine President Volodymyr Zelensky, which is at the center of the Democrats' impeachment case

"And you have to understand when I made that call, there might have been 25 people on the call. You know, I know that there are many people on all of those calls.

"Can you imagine … with all of these people on the call, I’m going to say something that’s inappropriate?" Trump said.

The president also said he did not instruct indicted Rudy Giuliani's business associate Lev Parnas to engineer the removal of Marie Yovanovitch from the post of U.S. ambassador to Ukraine, but added: "I have a right to hire and fire ambassadors."

"Were you relying on Lev Parnas to get rid of your ambassador [Yovanovitch]?" Arroyo asked Trump.

"No, no, but I have a lot of people and he's somebody that I guess, based on pictures that I see, goes to fundraisers," the president said of Parnas, before adding: "But I am not a fan of that ambassador."

The president was responding to an ABC report which claimed Trump told a group that included Parnas and his associate Igor Fruman in April 2018 that he wanted Yovanovitch removed "tomorrow."

"But were you telling Parnas to get rid of her?" Arroyo asked. "I mean, you have a State Department."

"Well, I wouldn't have been saying that," Trump responded. "I probably would have said if it was Rudy there or somebody. But I make no bones about it. I won't have ambassadors — I have every right. I want ambassadors that are chosen by me."

A source familiar with the recording told Fox News that the ABC report did not reflect the context of the conversation and added that Trump did not make the remark in a "serious" fashion. In response to the report, White House Press Secretary Stephanie Grisham said: "Every President in our history has had the right to place people who support his agenda and his policies within his Administration."

Yovanovitch was formally recalled in May 2019. Parnas and Fruman were arrested in October of that year and are charged with making illegal campaign contributions in order to further their business interests and political goals. Both have pleaded not guilty.