Humanitix makes a virtue out of booking fees

Two young Sydneysiders have created a service that could change the way you feel about booking fees.

Humanitix is an online ticketing platform backed by tech giants Google and Atlassian – and also a not-for-profit organisation funding education projects in Australia and abroad. 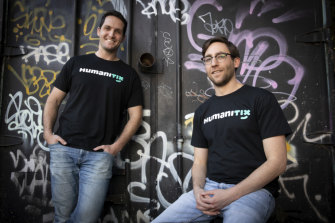 “Ticketing is seen as a necessary evil, there's billions of dollars in these booking fees and no one likes them but event organisers put up with it because they need to do it,” said Humanitix co-founder and director Joshua Ross.

“Our objective isn't to make booking fees zero, it's to solve inequality through education programs. But we think there's a massive opportunity in ticketing, where fees can be more modest, and you can have the best of both worlds. It doesn't have to be rorting customers.”

For charity events, Humanitix donates the money straight back to the organisation. For other events, the organiser can choose whether to fund girls’ education in the developing world with Room to Read, Indigenous scholarships in Australia with Yalari, or nutrition for school children with OzHarvest.

A few months ago Humanitix crossed the milestone of having donated $250,000 to the three charity partners. “We’re expecting this year to fund 300,000 meals for disadvantaged school children, put 430 girls through a full year of school, and fund seven Indigenous scholarships around Australia,” Mr Ross said.

The two largest ticketing companies in Australia, Ticketmaster and Ticketek, were forced to improve their pricing practices in 2014 after the Australian Competition and Consumer Commission investigated them for “drip pricing” where consumers are not told about unavoidable fees until late in the transaction.

This year the Federal Court found ticket reseller Viagogo misled consumers by referring to itself as “official” and creating the impression of scarcity when there were plenty of tickets available on other platforms. Viagogo had also been luring customers in with a headline price without disclosing additional fees including a 27.6 per cent booking fee on most tickets.

Humanitix offers a standard price of 4 per cent plus 99c, inclusive of credit card fees and GST, while organisers of bigger events can negotiate a better rate. The nearest competitor is Eventbrite, which has a basic package that is cheaper but a like-for-like price is 5 per cent plus 99c plus GST.

Mr Ross, 31, worked in funds management, while his co-founder Adam McCurdie, also 31, was a management consultant. When they came up with the idea for Humanitix, they both moved back home to live with their parents, while Mr McCurdie quit his job and they shared Mr Ross’ salary “on a handshake” for about 15 months.

The pair volunteered their time for two years, then eventually received donations from private philanthropists to fund development of the technology. Last year they won the $1 million prize from the Google Global Impact Challenge and recently, the Atlassian Foundation provided a $1.2 million grant.

Humanitix recently expanded to New Zealand and is hoping to hit the United States within the next 12 months.

Most events range from 10 people to 20,000 but the founders say the technology, hosted on Google’s cloud platform, is capable of bigger events.