(Reuters) – European shares tumbled on Wednesday in their first trading session of the quarter, with growing evidence of the economic damage from the still rapidly spreading coronavirus fanning fears of a deep global recession. 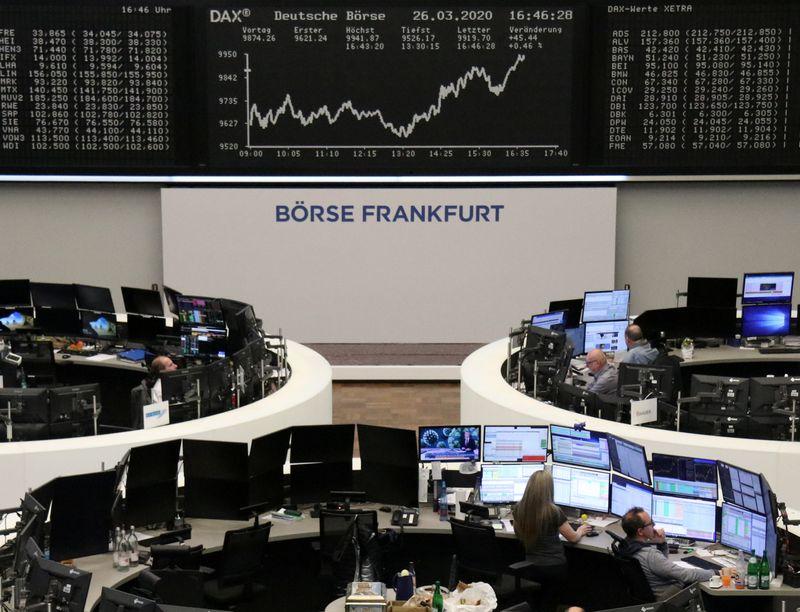 The pan-European STOXX 600 index was down 2.9%, with Tuesday’s session rounding off its worst quarter in 18 years during which it lost about $2.8 trillion in market value.

HSBC (HSBA.L), Santander (SAN.MC) and Lloyds of London (LLOY.L) were among the biggest drags on the benchmark index after joining European peers in suspending dividend payments to shore up liquidity.

The wider banking index .SX7P fell back near record lows following a rebound last week that was powered by aggressive fiscal and monetary stimulus from around the world.

“The optimism that we saw is very very early days and it’s way too early to call a turning point in this crisis,” said Bert Colijn, senior economist at ING in Amsterdam.

“In Europe, we see cautious signs that the containment measures may be having an impact, but things in the U.S. continue to develop quite quickly. Investors are swinging between the two and that’s dominating markets at the moment.”

U.S. President Donald Trump warned Americans of a “painful” two weeks ahead, with signs the U.S. death toll could stretch into the hundreds of thousands even with strict social distancing measures.

Adding to dismal economic figures from Asia, data from the euro zone showed a collapse in manufacturing activity in March, with analysts predicting a prolonged halt in supply chains could deepen the decline in the next few months.

“It would be naive to assume that the virus saga is already priced in,” said Charalambos Pissouros, senior market analyst at JFD Group.

“We see decent chances for equities to trade south and for safe-havens to shine again.”

Profit for companies listed on the STOXX 600 is now expected to slide by a fifth in the second quarter, deepening a European corporate recession, while dividends paid by those firms are forecast to fall by about 40%.

Commodities miner Glencore (GLEN.L) fell 3.9% after becoming the latest high-profile firm to defer a decision on its dividend pay out for this year, warning of material disruption to production.