Nearly 48 hours after Tropical Storm Isaias blasted the Northeast, around 1.7 million customers are still without power in Connecticut, New Jersey and New York.

The governors of New York and Connecticut are now calling for probes into how utility companies responded to the storm.

New York Gov. Andrew Cuomo said he was directing the state's Department of Public Service to launch an investigation into the storm response by Verizon, PSEG Long Island, Con Edison, Central Hudson Gas & Electric, Orange and Rockland Utilities and New York State Electric & Gas to understand "how such a failure could have taken place."

Thousands of households remain without power in the New York City metro area.

"We know that severe weather is our new reality and the reckless disregard by utility companies to adequately plan for tropical storm Isaias left tens of thousands of customers in the dark, literally and figuratively," the governor said. "Their performance was unacceptable."

POWER IN NEW YORK KNOCKED OUT BY ISAIAS WON'T BE FULLY RESTORED UNTIL SUNDAY, SAYS CONED

According to the governor's office, utilities have deployed 7,000 workers to help with damage response and restoration and service. The New York Democrat declared a state of emergency on Wednesday afternoon, as 703,000 still remained without power. 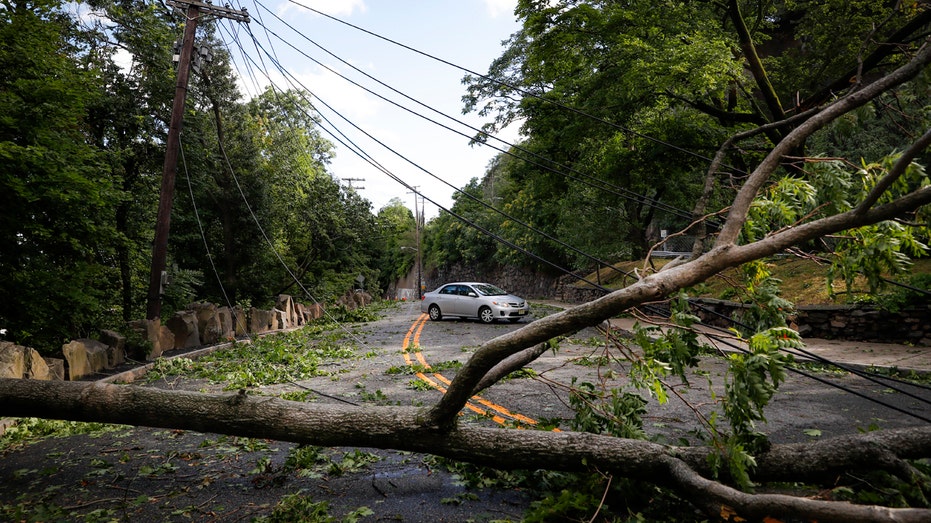 Debris and power lines lie in a road brought down by high winds and rain, Tuesday, Aug. 4, 2020, in Edgewater, N.J. (AP Photo/John Minchillo)

As of Thursday morning, ConEd said that those crews have reached the "halfway mark" in restorations after the storm brought down thousands of trees, 78 poles, and other equipment, causing over 580 road closures and approximately 300,000 customer outages.

“This storm’s impact to the tri-state area was historic,” Matthew Ketschke, Con Edison senior vice president of Customer Energy Solutions said in a statement. “We are making significant progress as we work around the clock to restore power. New Yorkers are depending on us.”

POWER IN NEW YORK KNOCKED OUT BY ISAIAS WON'T BE FULLY RESTORED UNTIL SUNDAY, SAYS CONED

ConEd expects power to return to most by Sunday. 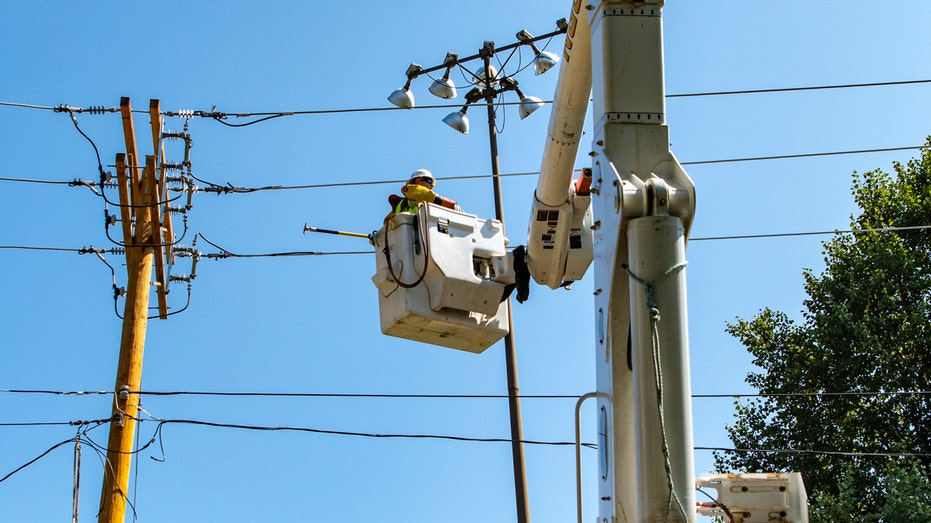 In Connecticut, Gov. Ned Lamont declared a state of emergency due to the widespread power outages in that state.

Lamont said that over 700,000 customers were impacted, and called on the Public Utilities Regulatory Authority to  investigate the state's utility companies' response to the storm in order to determine "whether the companies are meeting their legal obligations and whether any penalties need to be applied." 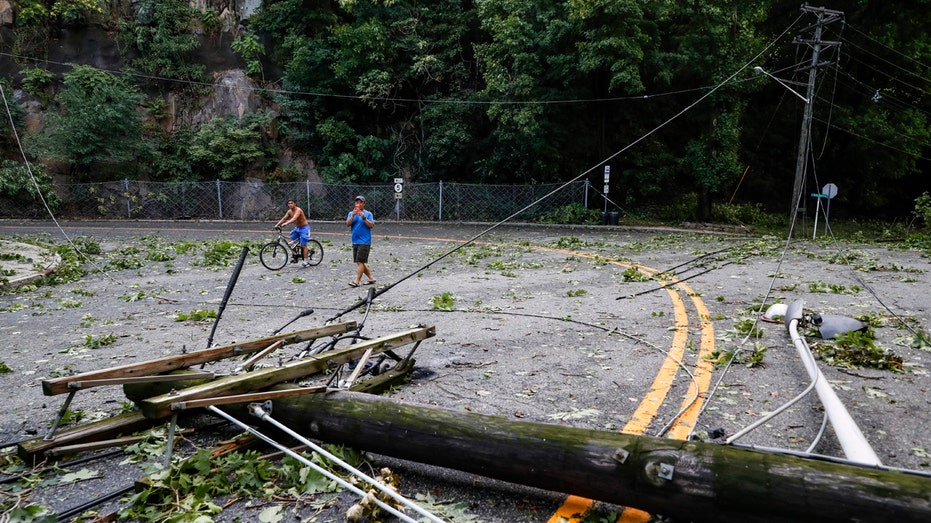 Debris from trees and power lines lie in a road brought down by high winds and rain, Tuesday, Aug. 4, 2020, in Edgewater, N.J. (AP Photo/John Minchillo)

"Several years ago, Connecticut experienced large-scale outages that took days to recover from, and we were told that the utilities were improving their resources so that they can be prepared for the next time Mother Nature inevitably hits again," the Connecticut Democrat wrote in a series of tweets. "And now here we are, with a wholly inadequate response to another storm."

Eversource said in a statement that crews had restored power to about 100,000 Connecticut customers as of 10 a.m. Wednesday but that restoration to all customers "will take multiple days."

HURRICANE SEASON 2020 NAMES AND HOW THEY GET PICKED

"The impact from this storm, in terms of power outages, is greater than Superstorm Sandy," Eversource Vice President of Electric Operations in Connecticut Michael Hayhurst said in a statement Wednesday. "The fierce winds with this storm caused widespread power outages and historic damage, affecting customers in all of the 149 communities we serve in Connecticut."

Stocks in this Article

In New Jersey, 569,190 customers remained without power on Thursday morning, according to poweroutage.us.

Utility officials have said that customers may not get their power back until Monday, NJ.com reported.

While his neighboring Democrats blasted utilities, New Jersey Gov. Phil Murphy on Wednesday held back, saying "we’re still in the third quarter of the game." 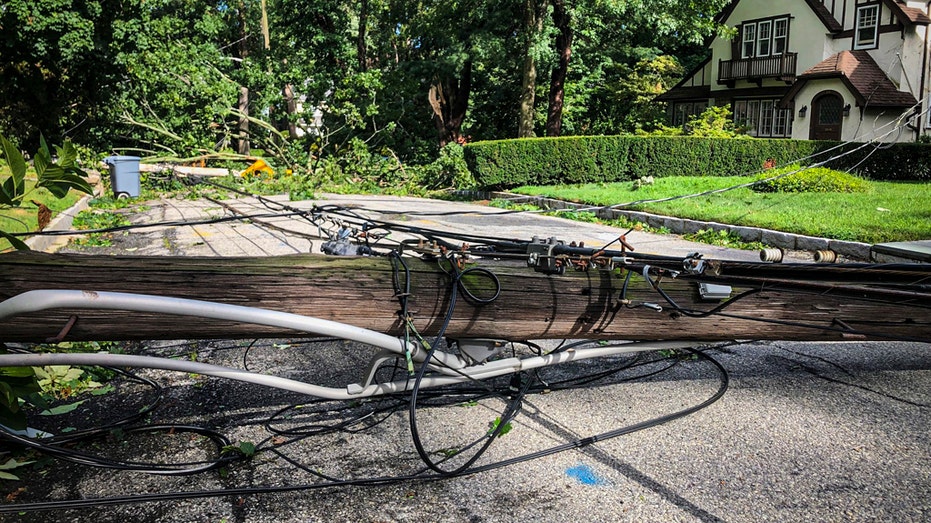 Hurricane Isaias made landfall near Ocean Isle Beach, N.C. around 11:10 p.m. on Monday night with 85 mph winds, before rocketing northward as it was downgraded to a tropical storm.

The storm's wicked winds that triggered tornadoes, downed trees, and floodwaters have left at least 9 dead, including a 5-year-old girl in Pennsylvania.

Banks and hedge funds are tracking your movements to help make bets on a pandemic recovery, and it's sparking a geolocation gold rush for the alt-data industry

PepsiCo to consider entering alcoholic beverages business
We and our partners use cookies on this site to improve our service, perform analytics, personalize advertising, measure advertising performance, and remember website preferences.Ok