Coronavirus may be smaller risk to Chinese manufacturing than feared, says JPMorgan

The coronavirus outbreak, that has sickened 43,000 people and killed at least 1,018, according to the latest numbers from the World Health Organization, may be a smaller risk to Chinese manufacturing than feared, according to JPMorgan.

Analysts included this map of China in a note published Tuesday with the yellow dots indicating the location of manufacturing facilities in China, and their position relative to Hubei province, home to Wuhan City, viewed as the epicenter of the virus after the first cases emerged there late last year.

The dispersion and severity of cases are indicated by the differing shades of pink. 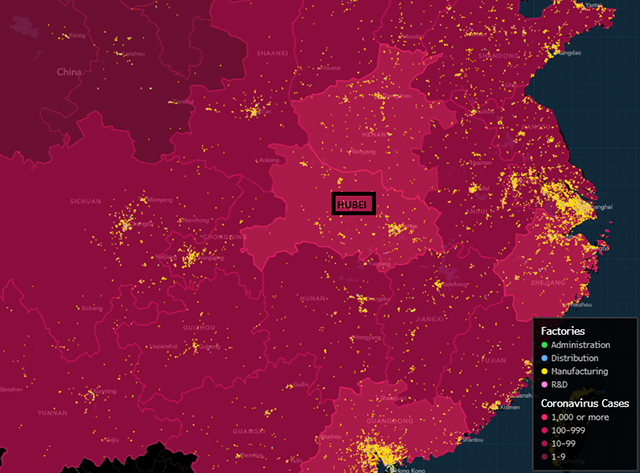 As the map shows, manufacturing facilities in Hubei are limited, they wrote. And the biggest industries, autos and health care, are not very time-sensitive, they wrote.

“In this regard (time sensitive and complex supply chain), the tech sector still needs to be monitored for idiosyncratic dislocations,” they wrote. “So far, gradual supply resumption seems on track. Some new products (like iPhone SE2 AAPL, +0.22%) may get delayed but existing products appear to have sufficient inventory. Thus, our analysts worry more about demand than supply.”

The potential damage to consumer sentiment is the key issue, they wrote. Until the current outbreak, data globally was good with only bond and commodity markets showing some skittishness.

“In a somewhat cyclical argument, it is important for the market to hold up as, contrary to popular belief, we find price action shaping narratives and sentiment as much as (if not more than) the other way around,” said the note.

The outbreak has triggered three types of investor reaction, according to the note.

Most investors appear to have to have opted to just ride out the storm, assuming the market response will be temporary and hard to time. A second group is expecting the situation to suddenly take a turn for the worse, and are calling views on the economic cycle into question, they wrote in a note Tuesday.

A minority of investors are actually raising risk exposure, assuming the infection spread is under control, after measures including the full quarantine of Chinese cities in the region and restrictions on travel. That group is assuming the supply disruption will be short-lived as factories can go back to operating at 100% capacity as soon as the infection risks are reduced, the analysts said.

Read now: Coronavirus could drive up out-of-stocks at stores by April: Wells Fargo

JPMorgan isn’t expecting Asian markets to gain significantly past their pre-virus levels, as they did after the severe acute respiratory syndrome (SARS) outbreak, which led to the deaths of 774 people in 2002 and 2003. Asia was enjoying stronger growth after the SARS crisis and emerging from a six-year downturn. This time around, growth is more subdued and earnings are not off-trend to a wide degree.

“While there may be a temporary overshoot (as above), we believe markets will remain rangebound for most of the year, reflecting the modest cycle expansion,” said the note.