Victoria is seeking an exemption from federal rules that would lock in back-up power to handle heatwave emergencies further in advance, as concerns mount about a tight supply and elevated blackout risk across the state this summer.

Lily D'Ambrosio, Victoria's energy minister, will announce on Wednesday that the state government will launch a bid to allow the energy market operator to enter into multi-year contracts for reserve power in Victoria – both with companies capable of generating more power and large energy users to power down. 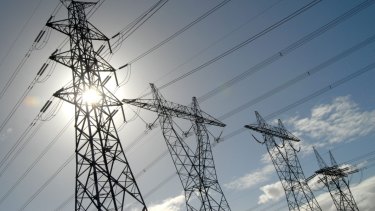 Victoria will seek an exemption from federal laws in the hope of locking in cheaper reserve power supplies.Credit:Bloomberg

The push comes as Victoria is becoming increasingly susceptible to energy supply issues as a result of reliance on an ageing fleet of coal-fired power generators, with rising unplanned outages causing instability in the market.

Under national energy rules, the Australian Energy Market Operator can only negotiate reserve power arrangements up to a year in advance – a limitation the Andrews government said caused uncertainty, less competition and higher costs.

"Victoria is not willing to wait on the sidelines when it comes to planning for our energy future – which is why we're breaking free from the federal government's outdated rules and getting it done ourselves," Ms D'Ambrosio said.

"Securing longer-term reserve power is not a silver bullet, but it's important we use everything in our arsenal to help AEMO balance our energy supply and demand during prolonged hot weather."

The AEMO, through its Reliability and Emergency Reserve Trader (RERT) process each year, seeks to secure strategic reserves of power that can be used in the event of emergencies such as multi-day summer heatwaves when millions of people switch on their airconditioning units at the same time.

Ahead of this summer, AEMO has warned that up to 1.3 million Victorian households could face blackouts unless power plants are repaired or additional supplies of electricity are secured. The regulator strains on the grid during peak summer demand will be exacerbated this year if repairs of a unit of AGL's Loy Yang A coal-fired power plant in the Latrobe Valley and one at Origin Energy's Mortlake gas-fired plant were not completed according to schedule.

The Victorian government said the ability to negotiate multi-year agreements would encourage smaller generators capable of supplying additional power for longer to participate in the reserve scheme, rather than relying on major electricity users to power down for a short period, and would reduce the price of costly reserve power.

Longer contracts would help mitigate the risk to the grid posed by unexpected outages at the state's ageing coal-fired power generators in the Latrobe Valley, the government said.

The Victorian government's request for the exemption from the national energy rules would be made with the Australian Energy Market Commission, which sets rules, to give the AEMO, the market operator, the option of negotiating multi-year RERT contracts "where it is cheaper to do so".

A spokeswoman for AEMO on Tuesday said it supported Victoria's application as it would allow the operator to secure reserve resources "well in advance" and for a lower cost than annual, short-term contracts.

"AEMO is concerned that reliability and system security risks are increasing as ageing thermal generators suffer reductions in reliability," the spokeswoman said.

The Australian Energy Council, representing the nation's major electricity and gas companies, was yet to see Victoria's rule change proposal but said the RERT mechanism had been reviewed earlier this year and extended to a maximum of 12 months.

The industry group said the RERT was intended to be an "emergency top-up" rather than a long-term safeguard, pointing to the outages that affected hundreds of thousands of Victorian households over two days in January. It warned that extending the scheme would be a "market intervention" that would compromise the investment decisions of new entrants.

"Providing a longer term for reserves will reduce electricity market efficiencies and ultimately result in increased costs for consumers," a spokesman said.

"While the RERT may be able to reduce the risk of customer outages, it can't remove the risk as we saw in January this year."

Ethereum Close Below $200 Would Make Case for Larger Decline
We and our partners use cookies on this site to improve our service, perform analytics, personalize advertising, measure advertising performance, and remember website preferences.Ok