Many parents missing mark in teaching kids how to save

Sydney mother of three Julia Thomas is the first to admit she could have approached financial literacy with her children with greater consistency.

While her 12, 15 and 25-year-old children were asked to do jobs around the house to receive pocket money, she didn’t teach them how to effectively save a good percentage of the cash they earned. 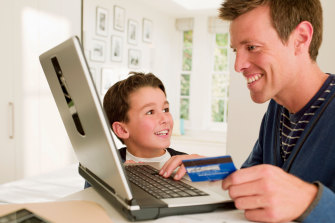 Teaching your kids about how to save can help establish good money habits for life.Credit:

“The kids do save a little, but we haven’t really thought about the concept of teaching them fully about money management,” she says.

Julia is not alone. Research reveals that the majority of Australian parents are missing the mark when it comes to teaching their kids everything they need to know about their money.

Many parents focus on restricting spending rather than saving. More than half encourage their children to save pocket money for purchases, which helps instil some appreciation for savings, but the concept is built on purchases and is not ideal to foster good long-term savings habits.

According to research conducted by investment app Raiz Invest, about 40 per cent of adults surveyed believed that their own parents could have done more to teach them good financial habits.

“It’s common for Australians to focus on expenditures, which are important. But investing and finding the best rates for savings are also important,” Lucas said.

The research revealed that three out of five respondents believe that parents are responsible for educating their children about money but they also want schools to take a bigger role.

Almost 75 per cent say schools are not doing enough to equip students with the financial skills they will need as an adult.

A big part of the problem is that children's view of money is skewed by the fact that they don’t often associate purchases with money in an age of online shopping, credit cards and internet banking.

The website provides a wealth of information on how to show your children the financial basics, such as how to budget and save, which will help establish good money habits for life.