VERGE (XVG) Price Rockets Away as Mystery Partnership is Announced

Verge is a cryptocurrency envision by its development team as an improvement on the original Bitcoin blockchain and to fulfill its initial purpose of providing individuals and businesses with a fast, efficient and decentralized way of making direct transactions while maintaining their privacy. It is the privacy part that is of most importance to XVG. Verge’s Wraith Protocal guarantees privacy during transactions by allowing the user to switch between public and private ledgers on the Verge blockchain. It is currently available on Windows, with the OSX version still being worked on.

Despite the bullish momentum that has reached its limit for the time being and is feeling exhausted in Asia, there is an altcoin as usual flying away to the moon with 38.00% increase in the last 24-hours – Verge (XVG). 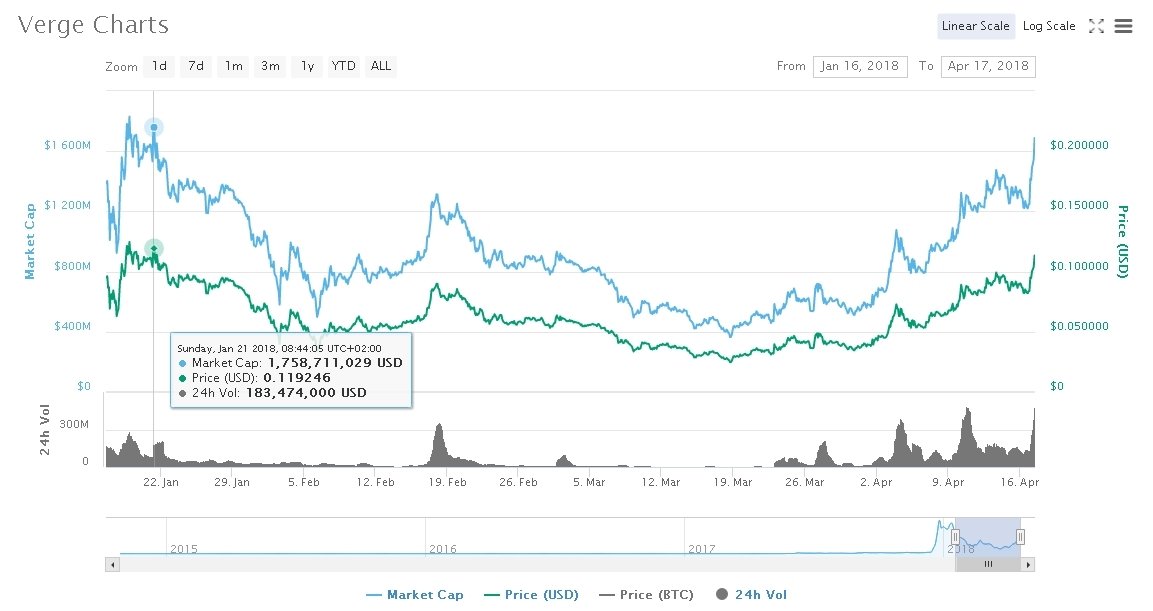 Source: coinmarketcap – According to CMC, the pair XVG/USD has reached the levels that were being experienced back in January – is this leading to a full reverse?

Many are quick to lambaste these altcoins on social media but there is no disputing the likes of Verge and Tron have been some of the better performing cryptos in recent weeks. The current momentum has come from the imminent announcement of Verge’s new partner today. A Medium post indicates that the official press release will be made at 10am EST.

Verge did run a crowd sale to secure this new partnership by raising funds, but most of the 75 million tokens were donated by TokenPay. This is a strong indicator as to who the new partner will be. Either way, Verge is showcasing better results mid week now with only Cardano that tried to keep up in the morning but did drop at 7% gain in the last day.

Binance has taken the bulk of the trade in XVG over the past day with almost 40% of the total. South Korean exchange Upbit has 30% with Bittrex in third with 21% of the total. Trade volume has risen almost five times from $110 million to around $513 million where it currently stands. Verge has surged back into the top 25 and is currently 17th with a market cap of $1.6 billion.

Token sale on ON! gamblica.io