Edward Snowden, former Central Intelligence Agency (CIA) employee, has put National Security Agency (NSA) documentation at the disposal of online news organization The Intercept displaying a secret program that was set to spy on Bitcoin trading on the cryptocurrency market.


“If the government’s criminal investigations secretly relied on NSA spying, that would be a serious concern. Individuals facing criminal prosecution have a right to know how the government came by its evidence so that they can challenge whether the government’s methods were lawful. That is a basic principle of due process. The government should not be hiding the true sources for its evidence in court by inventing a different trail,” – American Civil Liberties Union’s Patrick Toomey explained his view on this situation.

The Intercept has published some interesting information that can drastically influence the financial market. The top-secret documents, obtained from world-famous whistleblower Edward Snowden, prove that the NSA has been monitoring Bitcoin trading transactions and their performers. The online newspaper also reports that the program was launched in order to track down the possible money flow to terrorist organizations.

Inside the NSA’s Plan

The U.S. Security institution has been tracing users’ activity with the help of MONKEYROCKET. It is an Oakster subprogram, being advertised in 2012 as a system guaranteeing anonymity. The MONEYROCKET subprogram allegedly aims at targeting users, particularly in Asia, Europe, and the Middle East. One of the memos read: 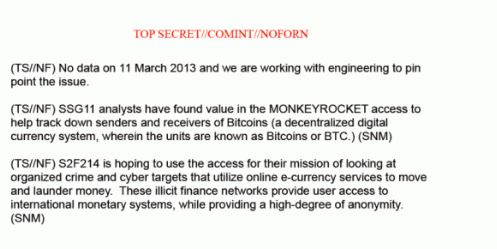 Furthermore, it is said that data gathering didn’t stop at transactions. The U.S. authority has also collected personal details available on users’ computers, such as passwords, activity history, and MAC addresses, a unique hardware identifier. It is something similar to a social security number (SSN) in America. As well as SSN for people, the code is linked to a device forever.

Generally, the experts expressed concerns towards the revealed information about the NSA targeting Bitcoin, based on Blockchain technology. For instance, Matthew Green, assistant professor at the Johns Hopkins University Information Security Institute, said: “[This is] bad news for privacy, because it means that in addition to the really hard problem of making the actual transactions private … you also have to make sure all the network connections [are secure].”

While Emin Gun Sirer, associate professor and co-director of the Initiative for Cryptocurrencies and Contracts at Cornell University, acting less categorically, told The Intercept that what the fintech users value most of all is its privacy. Thus, having learned about the NSA’s hidden activity, privacy-conscious people are likely to choose another more secure option for their digital currency aims.