Australian computer scientist and entrepreneur Dr. Craig Wright has been granted a victory in the Kleiman v. Wright case after he was able to provably send a transaction from one of the Bitcoin wallets known to belong to Bitcoin creator ‘Satoshi Nakamoto’, thereby verifying his claims that he is, in fact, the undisputed creator of BTC.

The transaction, worth roughly 01.04 BTC was sent and received by Dr. Wright and his legal team in the presence of Judge Bruce Reinhart on Tuesday, March 31st, who granted the ruling later the same day.

While there is no certainty that any Bitcoin wallet belongs to Satoshi Nakamoto, the transaction in question was executed from the wallet where the block reward from the first block on the Bitcoin blockchain, known as the Genesis Block, was originally deposited (1A1zP1eP5QGefi2DMPTfTL5SLmv7DivfNa). The wallet had previously lain dormant for years. 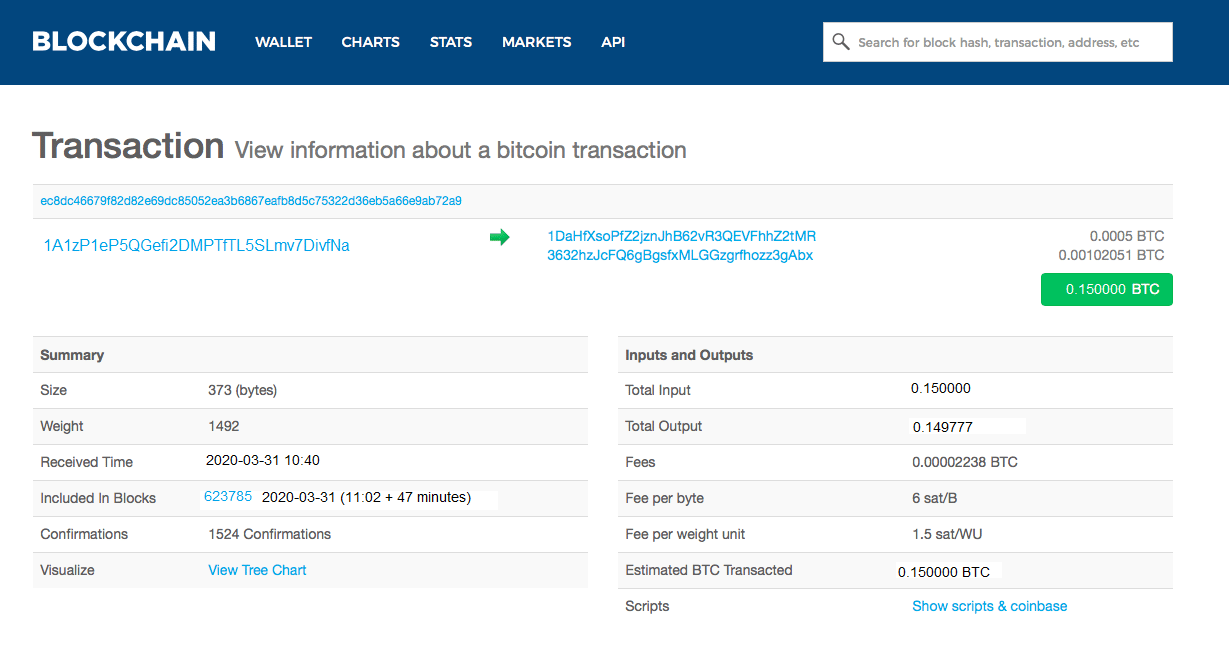 “One of the most significant legal events” in crypto history

Dr. Wright’s legal representation called the victory one of the “most significant legal events” in the history of cryptocurrency at large.

“We fought and won a victory for justice and democracy,” said Anu Saukko, a representative from Dr. Wright’s legal team.

“It upholds a fundamental principle of justice: that the justified claims to Dr. Wright’s life and work cannot be undone by malicious attempts to thieve physical and intellectual property…For the court to hold otherwise would have given the government free rein to sweep away any truth it did not agree with.” 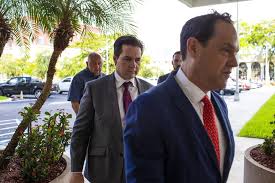 Wright himself has not yet spoken publicly about the victory, but is expected to speak out in a live broadcast set for 13.00 EST on April 1st, 2020–the broadcast can be viewed at that time here.

The news is particularly surprising given the fact that the ongoing Kleiman v. Wright case has included so many instances in which Dr. Wright and his defense team were unable to produce the private keys necessary to send a transaction from one of the wallets that are known to be associated with Satoshi Nakamoto.

Wright’s legal team was able to recover the keys in a series of encrypted documents that were discovered in electronic storage on Mr. Wright’s estate.

However, it’s been a long road to victory from Wright and his team: after a mysterious bonded courier who was allegedly responsible for delivering the keys to Wright and to the court failed to materialize earlier this year, the judge presiding over the case expressed serious doubts that Wright’s claims were truthful. Wright argued that he was unable to prove his access to the trust due to attorney-client privilege.

Naturally, the revelation that Wright really is Satoshi has caused quite a bit of a stir in the crypto space–for years, Wright’s claims to Satoshi’s identity have been the subject of heated debate in addition to several lawsuits.

Some analysts in the crypto sphere are particularly shocked at the abruptness of the ruling. Richard ‘Dick’ Hedd, chief operating officer of Sydney-based cryptocurrency investment management firm A1 Crypto Solutions, commented on Twitter that the judge must have been “on one.” Hedd also appears to be the originator of the #WrightisWrong hashtag, which has begun trending on Crypto Twitter. 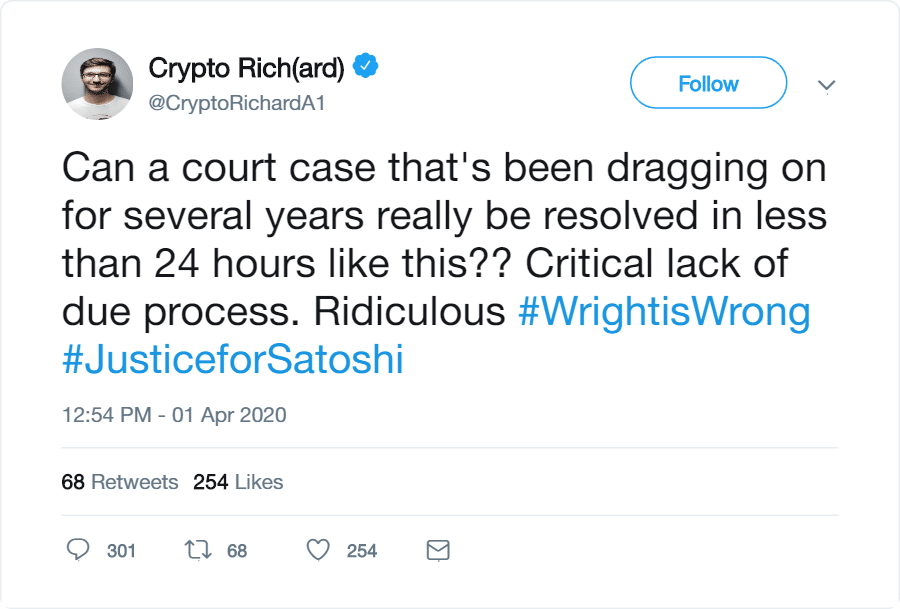 “[It’s] completely baffling,” wrote Paul Ennis, founder of cryptocurrency trading platform CryptoXO, on Twitter. “I literally have no idea what to say…first the coronavirus takes over the world, and then Craig Wright is Satoshi Nakamoto.” 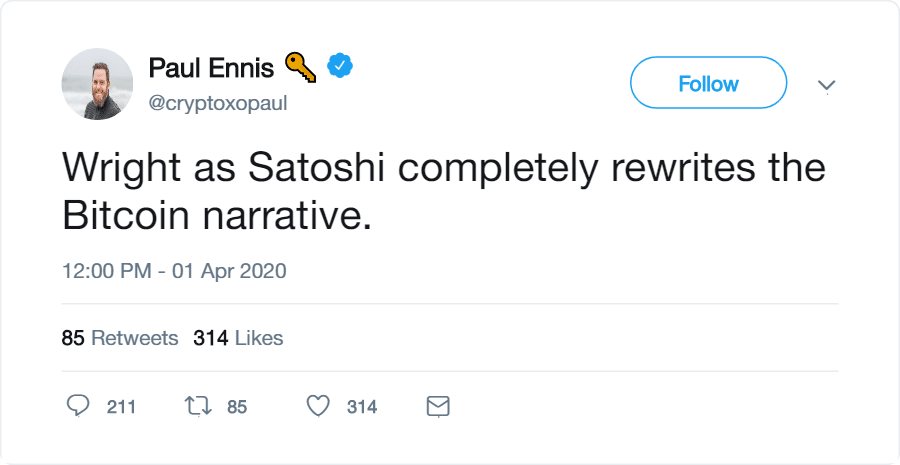 On the other hand, Wright’s base of die-hard supporters and Bitcoin SV (BSV) enthusiasts are celebrating the victory. 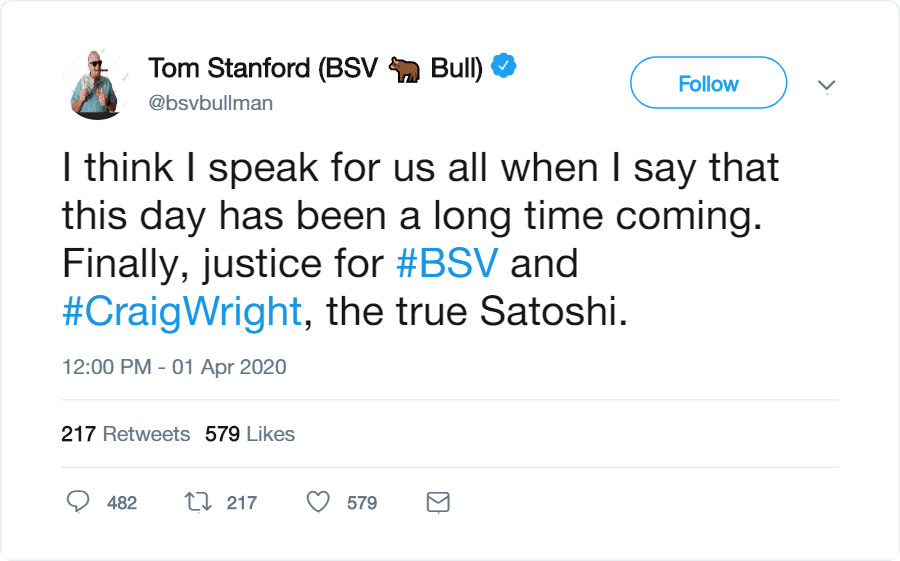 Wright originally became embroiled in the Kleiman v. Wright case in 2018, when Ira Kleiman–brother of the late David Kleiman, a developer and former business partner of Wright’s–sued Wright for half the bitcoin holdings in the so-called “Tulip Trust” a massive stockpile of BTC that Wright allegedly mined in partnership with David Kleiman; Ira Kleiman alleged that Wright defrauded the family’s estate.

The dispute eventually came down to whether or not Wright could prove his ownership of 1.1 million bitcoin (worth roughly $7.5 billion) held in the Trust; the transaction executed in court yesterday was regarded as undeniable proof.

The implications for the Bitcoin network at large have not yet been fully realized.

In February, Dr. Wright wrote in a blog post that while forks of bitcoin (BTC) would be allowed under the open-source MIT license under which bitcoin was released, copying the database would constitute infringement of ownership rights; as such, he alleged that Bitcoin Core and Bitcoin ABC, which respectively maintain the Bitcoin and Bitcoin Cash networks, “have sought to use my database without authority.”

“As the sole creator of Bitcoin, I own full rights to the Bitcoin registry. People can fork my software and make alternative versions. But, they have no rights to change the protocol using the underlying database,” Wright wrote.

“Oh yeah, and one more thing,” Wright wrote, taking a sip from a cool glass of Macallan 1926. “April Fools.”

Venues in crisis: ‘We couldn’t survive if we opened 10 nights a week’

Merkel, Citing Global Virus, May Skip Trump’s Rescheduled G-7
We and our partners use cookies on this site to improve our service, perform analytics, personalize advertising, measure advertising performance, and remember website preferences.Ok