New York (CNN Business)As a recent wave of mob-led store robberies has put retailers, mall operators and communities on edge, one popular shopping center is keeping an unusual security measure in place through the holiday season.

The Grove, a famous open-air shopping complex in Los Angeles, has added a high coil fence barrier that resembles barbed wire at the property’s entrances and exits.
Management added the “tangled tape” coil fencing, which is made from a custom aluminum-and-steel mesh, ahead of Thanksgiving weekend. The fencing is installed nightly after the mall closes and removed before it reopens, and it’s just one of the security measures the complex put in place after a rash of November smash-and-grab robberies at high-end stores in San Francisco and other cities. 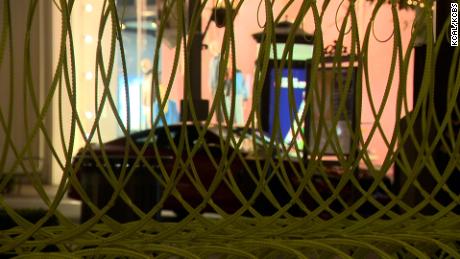 The shopping center has also heightened its security presence with additional personnel including off-duty police officers — but the fencing is a more novel addition to the options operators can choose from to protect their stores, experts say.

“The coil wire is a reasonably new technology in retail crime prevention,” said Mike Lamb, an expert in retail security and former vice president of asset protection and safety at Walmart (WMT), Home Depot and Kroger. “It looks like it’s designed to not cause injury, but [it] can tangle a person in it and slow down someone who is trying to get away quickly.”

The wire fencing in place didn’t fully deter a robbery at The Grove on November 22, when a group of 18 to 20 looters used sledgehammers and an electric bicycle to smash into the complex’s Nordstrom (JWN) store after hours. They managed to steal at least $5,000 of merchandise and cause $15,000 in damage, though police later recovered merchandise and arrested three people in connection with the burglary. 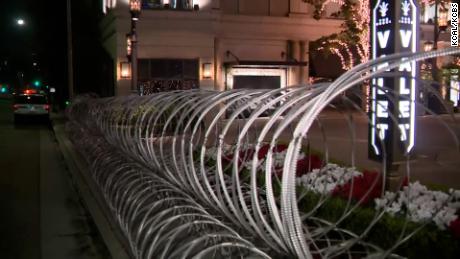 But a spokesperson for The Grove noted the fencing did help prevent the assailants from getting onto the shopping complex’s property by blocking the entrance to it: The Nordstrom store entrance that was damaged faced a public street and so that area was not protected by the barrier.
Additionally, all stores at The Grove have a special ballistic film coating exterior- and interior-facing windows, which helps fortify the glass in the event of a smash-and-grab type of crime. That film did make it more difficult for the Nordstrom assailants to break through the glass, giving law enforcement more time to respond.
Retailers all over the nation have been shaken by the spate of robberies. 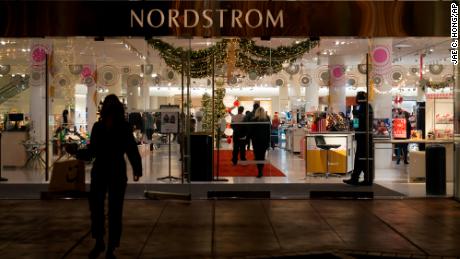 At Los Angeles’ nearby Citadel Outlets shopping center, for example, general manager David Blagg said security has been tightened there too: “We have also increased our onsite security staff around the clock and have stationed security personnel throughout the center. Additionally, we have gates at entrances and exits that can be closed quickly giving us the ability to lock down the center within 1 to 2 minutes.”
And last week, a group of 20 retail leaders — including the CEOs of Target (TGT), Best Buy, Nordstrom (JWN), Home Depot and CVS (CVS) sent a letter to Congress expressing their concern over the wave of brazen store robberies in major US cities and urged lawmakers to take action.

“As millions of Americans have undoubtedly seen on the news in recent weeks and months, retail establishments of all kinds have seen a significant uptick in organized crime in communities across the nation,” said the letter, sent by the Retail Industry Leaders Association.
The group called on Congress to pass legislation that would deter criminals from being able to easily resell stolen merchandise, specifically online.
Source: Read Full Article