As the fallout over a since-deleted tweet voicing support for Hong Kong by the general manager of an American basketball team continues in China, several NBA Cares events were abruptly canceled this week in Shanghai.

Meanwhile, the world of e-sports is navigating a controversy of its own, after a high-profile gamer from Hong Kong was banned from the platform Blizzard for voicing support for protesters in Hong Kong during a post-game interview. In a statement announcing his removal, Blizzard said they were banning player Blitzchung for violating its competition rules by engaging in an act that “offends a portion or group of the public, or otherwise damages Blizzard image.”

Both cases have illustrated the difficulty of navigating China’s lucrative market.

Before the controversial tweet, the Rockets were one of the most beloved teams in China. On Oct 4., its general manager Daryl Morey tweeted in support of pro-democracy demonstrators in Hong Kong. While the tweet was quickly deleted, the backlash was swift. Within a few days, China’s state-run broadcasting network ordered a blackout of NBA coverage. China’s internet giant Tencent, who inked a five-year, $1.5 billion deal in August to stream NBA games in China, also announced that they will not play Rockets games.

Morey has apologized, and the Rockets owner Tilman Fertitta said that Morey does not speak for them. Rocket’s players James Harden and Russell Westbrook apologized at a news conference, with Harden adding, “We love China, we love playing there.”

Nonetheless, the fallout from the tweet continues in China. On Wednesday, video spread on social media of an NBA banner being ripped off the side of a building in Shanghai. 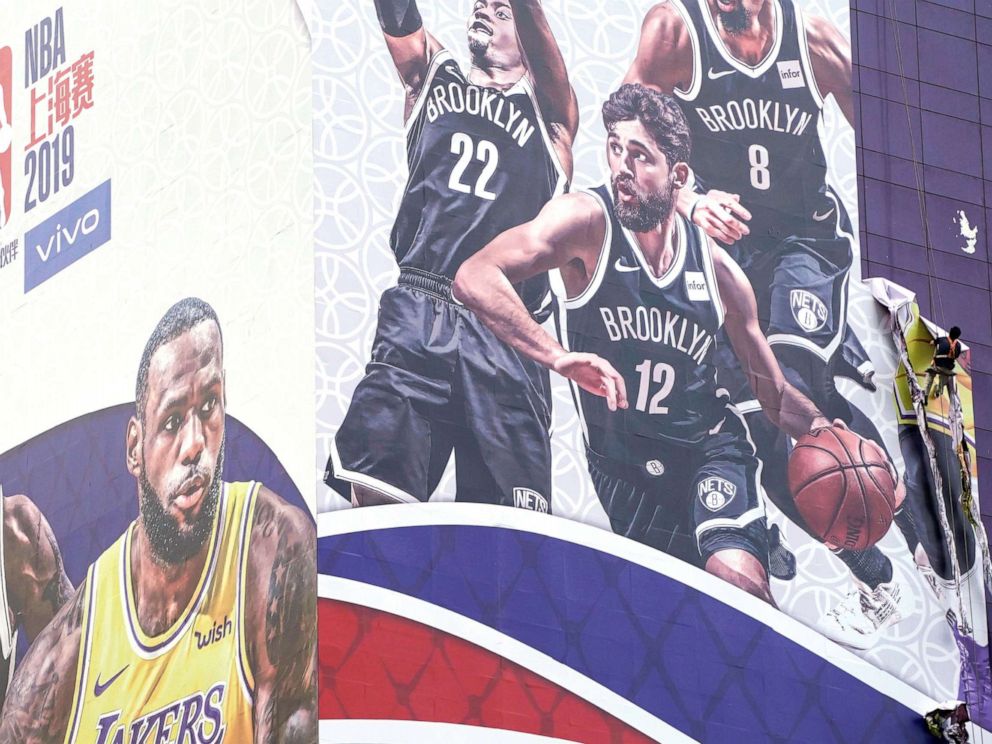 The NBA said that it was not its decision to call off Wednesday’s NBA Cares event with the Lakers, which was supposed to benefit the Special Olympics. On Tuesday, a separate NBA Cares event with the Brooklyn Nets at a school in Shanghai was also called off by the Chinese government. NBA commissioner Adam Silver said that they would still donate computers to the education center as planned, according to ESPN.

In a statement announcing their decision to suspend plans to broadcast a series of NBA preseason games, China’s state-owned broadcasting network CCTV said they are “strongly dissatisfied and opposed” to Silver’s “claim to support Morey’s free expression of rights.”

“We believe that any speech that challenges national sovereignty and social stability is not within the scope of freedom of speech,” the statement added. “To this end, CCTV Sports Channel of the Central Radio and Television General Administration decided to immediately suspend the current broadcast arrangements of the NBA preseason [China Games] and immediately investigate all cooperation and exchanges involving the NBA.”

As the NBA is still reeling from the fallout, the world of e-sports was rocked by a separate scandal after a high-profile gamer from Hong Kong spoke out in support of the anti-government demonstrations in an interview — and then was abruptly banned from the competition.

Ng Wai Chung, known by his gaming handle “Blitzchung,” was banned from the platform Blizzard, where he was competing in a Hearthstone tournament, after a post-game interview supporting protesters in Hong Kong. In a statement announcing his removal, Blizzard said they were banning Blitzchung for violating its competition rules by engaging in an act that “offends a portion or group of the public, or otherwise damages Blizzard image.”

On Wednesday, #BoycottBlizard was trending on Twitter in the U.S. Chung has not publicly responded to the news, but his Twitter bio was updated to read that he was “banned” as a grandmaster and states: “Fight for Freedom. Stand with Hong Kong.”

The move drew bipartisan criticism from lawmakers on Twitter.

“Blizzard shows it is willing to humiliate itself to please the Chinese Communist Party,” Sen. Ron Wyden, D-Oregon, said in a tweet. “No American company should censor calls for freedom to make a quick buck.”

“China using access to market as leverage to crush free speech globally. Implications of this will be felt long after everyone in U.S. politics today is gone,” he added.